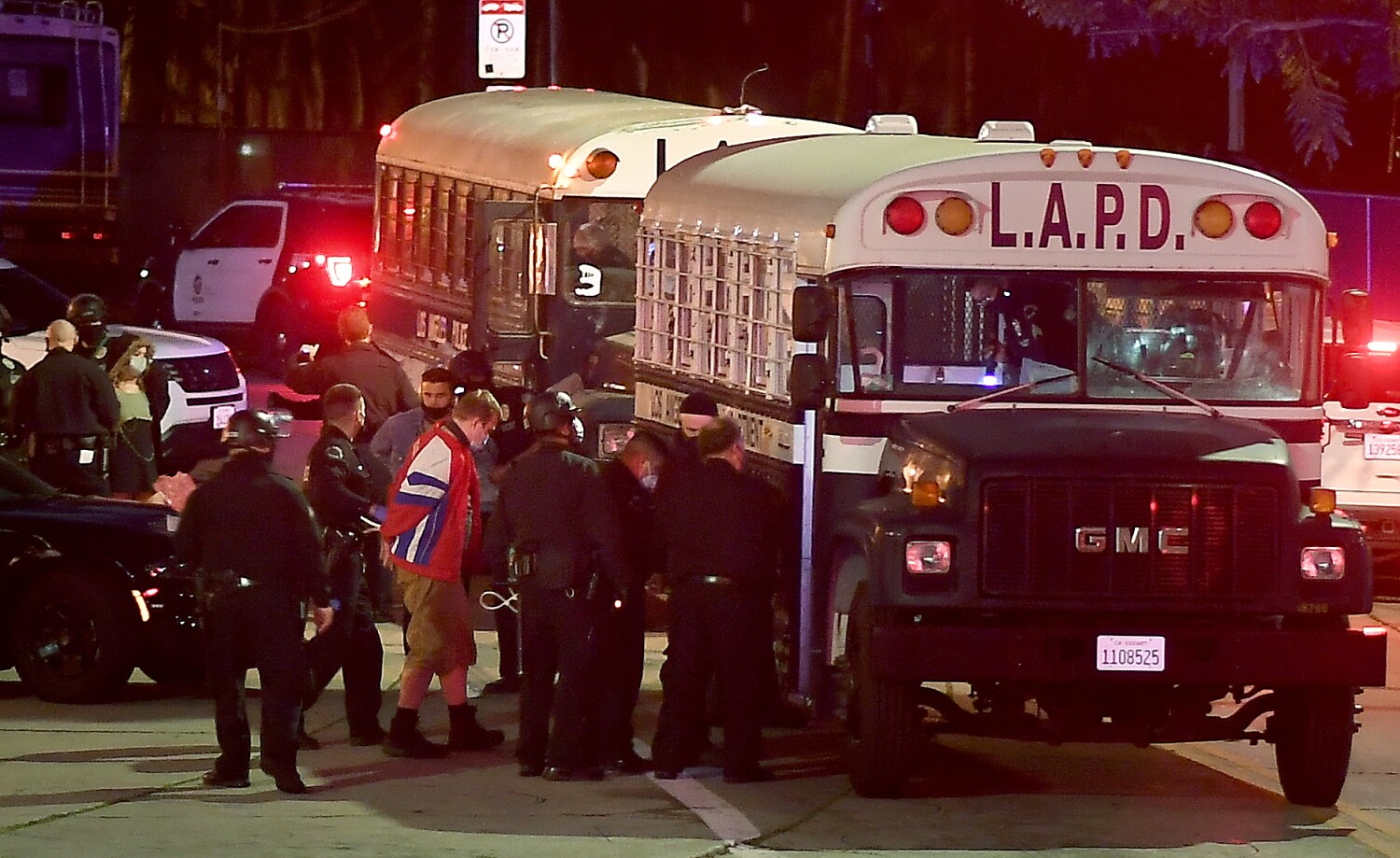 Two journalists who were arrested while covering a protest in Echo Park last year have sued the city of Los Angeles in federal court, alleging their constitutional rights were violated.

Jonathan Peltz and Kathleen Gallagher, both of the online news outlet Knock LA, were covering protests over the removal of a homeless encampment from the banks of Echo Park Lake on the evening of March 25, 2021, when Los Angeles police declared the gathering unlawful, surrounded the protesters and journalists gathered there and began detaining and arresting them.

Among those detained were Times reporter James Queally, Spectrum News reporter Kate Cagle and L.A. Taco reporter Lexis-Olivier Ray, though they were all released at the scene. Not so Peltz or Gallagher, who were arrested and booked “despite clearly identifying themselves as journalists and being surrounded by other journalists engaged in similar conduct,” their lawsuit states.

“I’ve never understood what their decision on that was,” Peltz said in an interview with The Times Monday.

“They knew we were journalists. That was unambiguous to the officers who arrested us,” Gallagher said in a separate interview with The Times.

The LAPD did not immediately respond to a request for comment on the litigation Monday. The department has previously defended the arrests that night, while also acknowledging some missteps in dealing with members of the media.

The department had created a designated area for media that night, but Peltz and Gallagher — and other reporters who were detained — said it was too far away for anyone in it to observe what was actually occurring between the protesters and police.

Peltz and Gallagher were bound by the wrists with plastic zip ties, searched and had their cellphones and other belongings taken from them before being placed on buses with dozens of arrested protesters, many of whom were not wearing masks against COVID-19 or were unable to fix their masks properly on their faces because they too were cuffed, the journalists’ lawsuit states.

Peltz and Gallagher remained in custody for more than four hours, and Peltz later went to the hospital, where medical staff said swelling in his arms and hands was likely the result of a pinched nerve suffered from being held in the zip ties for so long, the lawsuit claims.

More than 180 people were arrested that night, most on charges that they had disobeyed a police dispersal order, but none were prosecuted, as City Atty. Mike Feuer chose not to file charges.

Peltz and Gallagher’s lawsuit, filed with the help of the Press Freedom Law Clinic at UC Irvine, alleged their arrests violated the LAPD’s own policies for journalists at protests. It also said the arrests fit a pattern of LAPD officers “obstructing, targeting, and retaliating against” journalists reporting on their actions.

The lawsuit argued the LAPD violated Peltz‘s and Gallagher’s 1st Amendment rights “by arresting them for performing their jobs as journalists to document the actions of police officers and protesters in a public place.”

Citing the release of journalists at larger outlets, the lawsuit also alleged that Peltz and Gallagher were subjected to disparate and unlawful treatment simply because Knock LA — a nonprofit news organization started by members of the community activist collective Ground Game LA — is not a traditional media outlet.

“The LAPD treated Jon and Kate like criminals, because Knock LA is not part of the establishment press,” said UC Irvine law professor Susan E. Seager, one of the journalists’ attorneys. “But the 1st Amendment — and the LAPD’s own policy — do not require reporters to work for the mainstream media or carry official LAPD press passes.”

The detention and arrest of so many journalists in Echo Park was one of many encounters in recent years in which journalists were targeted by police, and one example of harassment that journalists and media advocacy organizations pointed to last year as they successfully advocated for the passage of SB 98, a law now in effect in California that adds protections for journalists covering protests.

The LAPD produced its own “after action report” on what occurred and found errors in its approach but also blamed other forces and protesters for the situation escalating to one where they said officers felt threatened and arrests became necessary.

Peltz said the police response that night — to protesters and especially to journalists — was “an abuse of power,” and that he hopes the lawsuit forces the department to answer for its actions.

Gallagher said there has been “a worrying trend over the past couple years of the police arresting or otherwise brutalizing journalists who are just trying to cover protests” — one she hopes the lawsuit will help end.