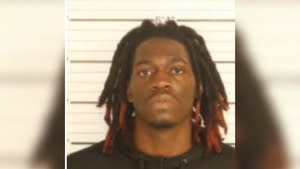 A KFC employee saved the day over the weekend after calling the police when a woman left a note begging for help, according to court records.

Diego Glay, 23, is charged with evading arrest and kidnapping after allegedly holding a woman against her will.

On May 15, the Memphis Police Department (MPD) responded to a kidnapping/abduction call in the 6200 block of Winchester Road just after 5 p.m.

Officers were told by an employee of the KFC that a woman had left a note begging for help and gave a description of the woman and the man with her, the affidavit said.

Officers were able to make contact with Diego Glay and the woman who matched the description given by the KFC employee.

According to records, Glay refused to obey officers’ commands and took off running.

After a short foot chase, the suspect was arrested.

The victim told police that Glay had been holding her against her will with physical assaults, threats and being armed with a handgun, records show. The victim said she and Glay had been in a relationship.

She also told officers that the suspect had been physically abusive towards her by punching her in the face and when she attempted to leave, she told officers that he took her phone and kept her from leaving his sight for days at a time, the affidavit read.

According to officials, the suspect said that he and the victim had been living in cheap, random hotels around the city.