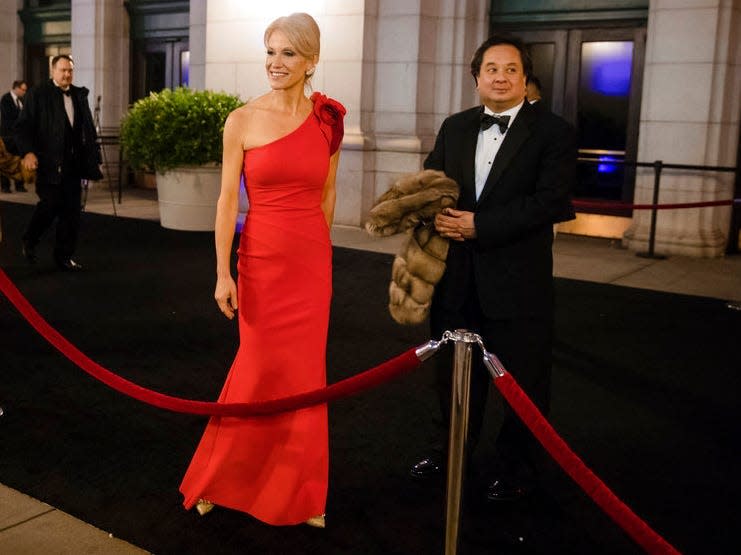 When Donald Trump was set to assume the presidency after the 2016 presidential election, all eyes were on his campaign manager, Kellyanne Conway, who steered his messaging and helped give him the keys to the White House.

Once inside 1600 Pennsylvania Avenue, she continued to have a more public role in the administration as a counselor to the president, but an unlikely voice began to counter much of the work she was doing during her tenure — that of her husband, George Conway, a conservative Yale-educated attorney.

In her newly-released memoir, “Here’s the Deal,” Kellyanne Conway wrote that her husband George was “beaming” while at the New York Hilton Midtown Manhattan hotel after the race was called for Trump.

However, two years later, Kellyanne Conway found herself having to answer for her husband’s multitude of anti-Trump tweets, with her partner seemingly turning on the then-president in the most public way — through a Twitter account that was gaining steam and creating a political firestorm in Washington.

Kellyanne Conway — despite her support of Trump — said that she could deal with her husband’s change of heart about the then-president, but was not thrilled by the public nature of his deep opposition to the GOP leader.

“Exactly no one — beginning with me — objected to George’s about-face on Trump, even if I did not understand it,” she wrote. “George was free to have opinions, even ones that were at odds with those he’d held just a short time before. The perplexing and vexing part was how public he was with those differences of opinion, how aggressive, how incessant.”

She continued: “This was so out of character for George: the name-calling, the spitefulness, the passive-aggressive nature. Some were so shocked, they nervously asked if he and I had some plan, as if I’d be in on a ruse to let loose on the president ‘and the people around him.’ ‘This is all for show,’ people would write. All silly. If this were a show, I wanted no part in it, literally.”

Kellyanne Conway proceeded to write that she felt that her husband was “moralizing” while also “violating” his marital vows. In the book, she pointed to a June 2020 tweet from her husband that captured the disconnect between the couple.

“No one is compelled to work for, speak for, defend, explain, rationalize, or excuse this president and his incompetence, derangement, and racism,” he tweeted at the time. “Whether to do any of that, or not, is a choice. And it’s a moral choice, a crucial one, both for individuals and the nation.”

The former Trump counselor expressed her unhappiness with the tone of the tweets, especially when her husband directly tagged Trump on Twitter.

“Trump was too busy and too uninterested to notice every comment or commentator,” she wrote. “George is a smart man who must have recognized this. So if he wasn’t trying to hurt or embarrass Donald Trump, or drive him out of the White House, then who was his intended target?”

Kellyanne Conway then stated that she began to avoid discussing political developments with her husband altogether.

“As time went on, George and I barely spoke about Trump or politics,” she wrote.

And she longed for her husband to cut his social media habits and revert back to the person he was before Trump took office.

“I just wanted the old George, the loving husband and father who did not fritter away the day in an online abyss about the same stuff over and over,” she expressed.