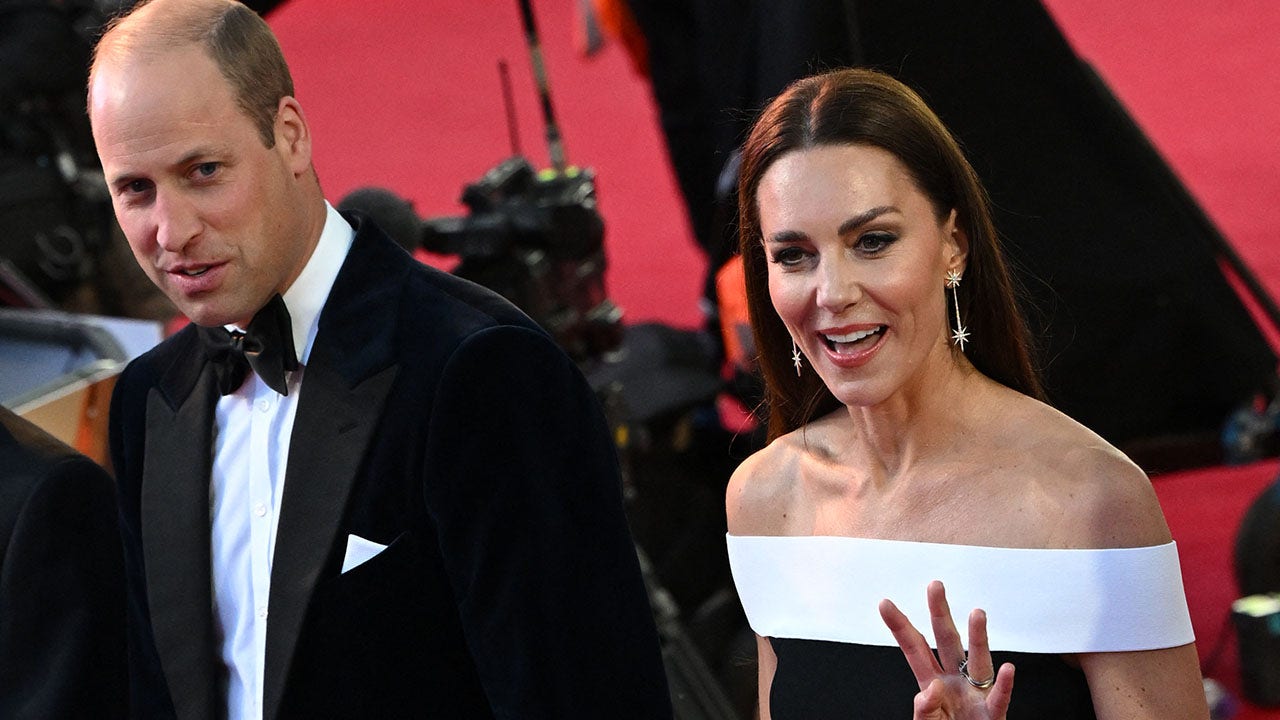 After Prince William and Kate Middleton stunned on the red carpet at the “Top Gun: Maverick” premiere, the Duchess explained why her three children were not in attendance.

While talking with children at the premiere on Thursday night, Middleton explained Prince George, Princess Charlotte and Prince Louis’ absence.

“It’s a school night,” Middleton said with a small laugh.

Prince William and Kate Middleton arrive on the red carpet for the UK premiere of the film “Top Gun: Maverick.”
(Photo by JUSTIN TALLIS/AFP via Getty Images)

Although George, 8, Charlotte, 7 and Louis, 4, have not attended their first movie premiere, they have made their red carpet debut. In December 2020, William and Middleton took their children to the theater to watch a Christmas pantomime play at London Palladium.

On Thursday evening, the royal couple walked in alongside the film’s star, Tom Cruise, speaking in front of a fighter jet stationed near the red carpet. Middleton wore a black, floor-length Roland Mouret gown, and William sported a classic tuxedo.

William and Middleton were not the only royals to attend a “Top Gun: Maverick” premiere. William’s cousins and Princess Diana’s nieces, Lady Amelia and Lady Eliza, were also in attendance at the film’s Cannes debut.

Prince William and Kate Middleton talk to family of Managing Director at Paramount Pictures UK John Fletcher during the “Top Gun: Maverick” premiere. Middleton explained that her children couldn’t make it because it was a school night.
(Photo by DAN KITWOOD/POOL/AFP via Getty Images)

William, a former Royal Air Force helicopter pilot, and Middleton were introduced to other members of the cast, including Miles Teller. Teller plays the son of Cruise’s friend Goose from the original “Top Gun” movie released in 1986.

The U.K. premiere will not be the first time William, 39, and Middleton, 40, have seen the “Top Gun” sequel. The Duke and Duchess of Cambridge were reportedly treated to a private screening with Cruise in April.

The “Top Gun” premiere was hosted by Paramount Pictures and The Film and TV Charity, which supports thousands of people working behind the scenes in Britain’s film and television industry. The charity provided support during the coronavirus pandemic when many in the industry lost their livelihoods.

On the red carpet, Cruise, 59, spoke about his relationship with William.

“We have a lot in common,” he said, according to My London. “We both love England, and we’re both aviators, we both love flying.”

Cruise is no stranger to the British royal family. He met William’s grandfather, Prince Philip, in 2017 during a dinner commemorating the 75th anniversary of The Outward Bound Trust at Buckingham Palace.

He previously met William’s mother, the late Princess Diana, with his then-wife Nicole Kidman in 1992 during the premiere of the film “Far and Away.” He later attended Diana’s funeral in 1997 with Kidman, 54.