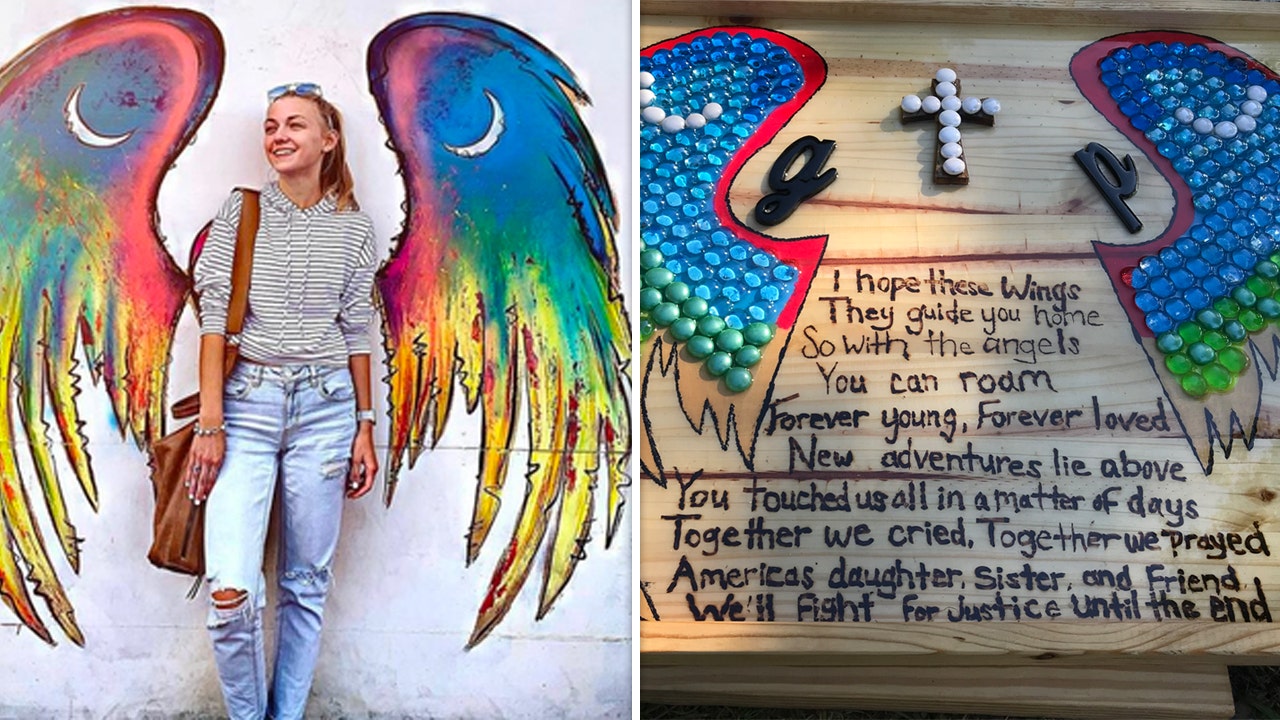 One year after the murder of 22-year-old travel blogger Gabby Petito, her grieving family is still fighting for justice in courts on opposite ends of the country.

Her suspected killer, 23-year-old ex-fiance Brian Laundrie, refused to cooperate with police, then ran away and took his own life days after she was declared missing. A little more than a week later, the FBI found her remains in the Bridger-Teton National Forest north of Jackson, Wyoming.

Three lawsuits related to her death, one naming Laundrie’s parents and another a Utah police department that allegedly mishandled a domestic violence call involving the couple two weeks before the murder, remain pending.

GABBY PETITO CASE: ONE YEAR ON FROM DOMESTIC VIOLENCE INCIDENT THAT COULD HAVE PREVENTED A MURDER

But her parents and stepparents, Joseph and Tara Petito and Nichole and Jim Schmidt, have spent a good part of the last 12 months raising awareness for domestic violence victims and missing persons through the Gabby Petito Foundation, which they established in her honor.

Her legacy now, 12 months after she was killed at the hands of a man she’d set off traveling cross-country with, is saving the lives of other domestic violence victims, according to her mother.

“I think Gabby’s story touched a lot of people, and she’s saving lives,” said Nichole Schmidt. “I get people messaging me all the time that they were inspired by her to get out of a relationship. I know that we can use this tragedy to help save so many. It’s her legacy.”

Petito’s disappearance and the ensuing manhunt for Laundrie captivated the country for months. A makeshift memorial outside city hall in North Port, Florida, where the couple had lived before setting off on a cross-country road trip last year, attracted visitors from around the globe. They left handmade tributes, poems, crosses made from wood and stone, photographs, flyers, flowers and references to her as “America’s daughter.” Nearby, protesters regularly gathered outside Laundrie’s parents’ house, demanding they turn in their son, who snuck out the evening of Sept. 13 and was not seen alive again.

Schmidt is calling on people around the world to “light up the sky” Saturday night in honor of domestic violence victims.

“Whether a candle, lantern or string lights in your backyard, light up the darkness for a few moments to honor those who lost their lives to domestic violence,” she wrote in a TikTok video. “There are some that bring a light so great to the world, that even after they have gone, the light remains.”

She is asking anyone who participates to post photos or videos of their light under the hashtag, #thelightremains.

“One year after her tragic death, Gabby’s family is dedicated to honoring her legacy by working to save the lives of other victims of domestic violence,” said attorney Brian C. Stewart, of the Parker & McConkie law firm, which Petito’s parents have retained in a lawsuit alleging the Moab Police Department’s negligence during a domestic violence call involving the couple played a role in her death.

Nichole Schmidt used an image of a very young Petito in her lap as her avatar during a virtual news briefing.
(Hunter Richards for Fox News Digital )

BRIAN LAUNDRIE’S GABBY PETITO CONFESSION: EXPERTS WEIGH IN ON ADMITTED KILLER’S CLAIMS, ‘THIS IS ALL LIES’

“The lawsuit is only one part of a broader effort to raise awareness of intimate partner violence, provide resources to victims and hold governmental institutions accountable, including law enforcement, to effect necessary changes to make our communities safer,” Stewart added.

After Petito’s mother, Nichole Schmidt, reported her missing on Sept. 11, 2021, Fox News Digital was the first media outlet to uncover the Moab domestic violence call, in which a witness told police he saw Laundrie hitting and slapping Petito and attempting to drive off without her.

Despite a Utah law requiring officers to make an arrest or issue a citation during a response to a domestic violence incident, the officers on scene did neither, wrote off the incident as a “mental break” and split the couple up for the evening, according to police documents obtained by Fox News Digital.

While some legal experts have called the Moab police lawsuit a longshot, Stewart said his firm has already prevailed in a similar case involving the death of Lauren McCluskey at the University of Utah. The firm in 2020 successfully represented the 21-year-old student’s family after she repeatedly asked for help from campus police before a 37-year-old man shot her outside her dorm in 2018. That case resulted in a $13.5 million settlement with the school.

Petito’s parents are also suing Laundrie’s parents in Florida, alleging they were aware that he killed their daughter and that his mom and dad attempted to help him flee justice.

The Petito-Schmidt family’s attorney in that case, Pat Reilly, declined to be interviewed for this story.

He is scheduled to depose Christ and Roberta Laundrie on Oct. 20 – one year after their son’s remains were discovered at the Myakkahatchee Creek Environmental Park in North Port, Florida. Fox News Digital was present when a detective there told the parents of the grim discovery.

The exact date of Petito’s death is unclear – but her parents in a wrongful death lawsuit allege it occurred on Aug. 27, 2021. The timing falls within the window of Petito’s estimated time of death provided by Teton County Coroner Dr. Brent Blue last year.

Photo Illustration of Brian Laundrie and Gabby Petito in front of The Merry Piglets Mexican Cafe, where she was last seen alive on Aug. 27. 2021.
(Google, Moab police, Gabby Petito/Instagram)

Aug. 27 is also the last time she was seen in public alive – by restaurant workers and a New Orleans couple in Jackson, Wyoming, who said they saw Laundrie arguing with wait staff.

“I have chills right now,” Nina Celie Angelo, who witnessed the incident, told Fox News Digital last year. “It’s crazy because it wasn’t just like we passed them on the street — it was a full blown incident.”

Angelo said she and her boyfriend, Matthew England, were in town for a wedding in late August. They were out to lunch at Merry Piglets, a Tex-Mex restaurant, between 1 and 2 p.m. on Aug. 27, when they said an agitated Laundrie began arguing with a waitress. Four and a half hours later, a travel-blogging couple passed Petito’s van at a campsite north of town.

Angelo, a photographer, said she couldn’t overhear the conversation but that she believed Laundrie was arguing with staff over the bill or about money. She described his body language as “aggressive” and said he left and returned about four times.

At one point, Petito came inside and apologized for Laundrie’s behavior, Angelo said. The restaurant confirmed the couple had dined there.

Laundrie may have seen Petito’s apology to the wait staff as undermining, according to John Kelly, a criminal profiler and psychotherapist. He said it may have enraged Laundrie and that there’s a good chance the killing took place that evening as a direct result.

Also on Aug. 27, Nichole Schmidt, Petito’s mother, said she received an “odd” text message from her daughter’s phone, according to a search warrant.

Memorial for Gabby Petito grows near City Hall in North Port, Florida. Here are some of the heartfelt messages left in her memory
(Fox News)

“Can you help Stan, I just keep getting his voicemails and missed calls,” the message read.

According to the warrant, “The reference to ‘Stan’ was regarding her grandfather, but per the mother, [Gabby Petito] never calls him ‘Stan.’ The mother was concerned that something was wrong with her daughter.”

By Sept. 1, Laundrie had driven all the way back to his parents’ house in Florida in Petito’s van. He declined to explain her whereabouts to police, Petito’s family and the media.

The FBI says he shot himself in the head at the nature reserve and left a suicide note, published first by Fox News Digital in June, in which he confessed to Petito’s slaying and attempted to frame it as a mercy killing.

“I ended her life,” reads the eight-page, handwritten note. “I thought it was merciful, that it is what she wanted, but I see now all the mistakes I made. I panicked. I was in shock.”

Laundrie wrote that he killed Petito after he claimed she injured herself when she fell in Wyoming. He also wrote: “From the moment I decided, took away her pain, I knew I couldn’t go on without her.”

Investigators had scoured the swampy Florida environmental park for five weeks, but due to high water levels, they turned up nothing. Once the water receded, they found skeletal remains and several personal items belonging to both Laundrie and Petito, including a drybag and notebook.

Michael Ruiz is a reporter for Fox News Digital. Story tips can be sent to [email protected] and on Twitter: @mikerreports