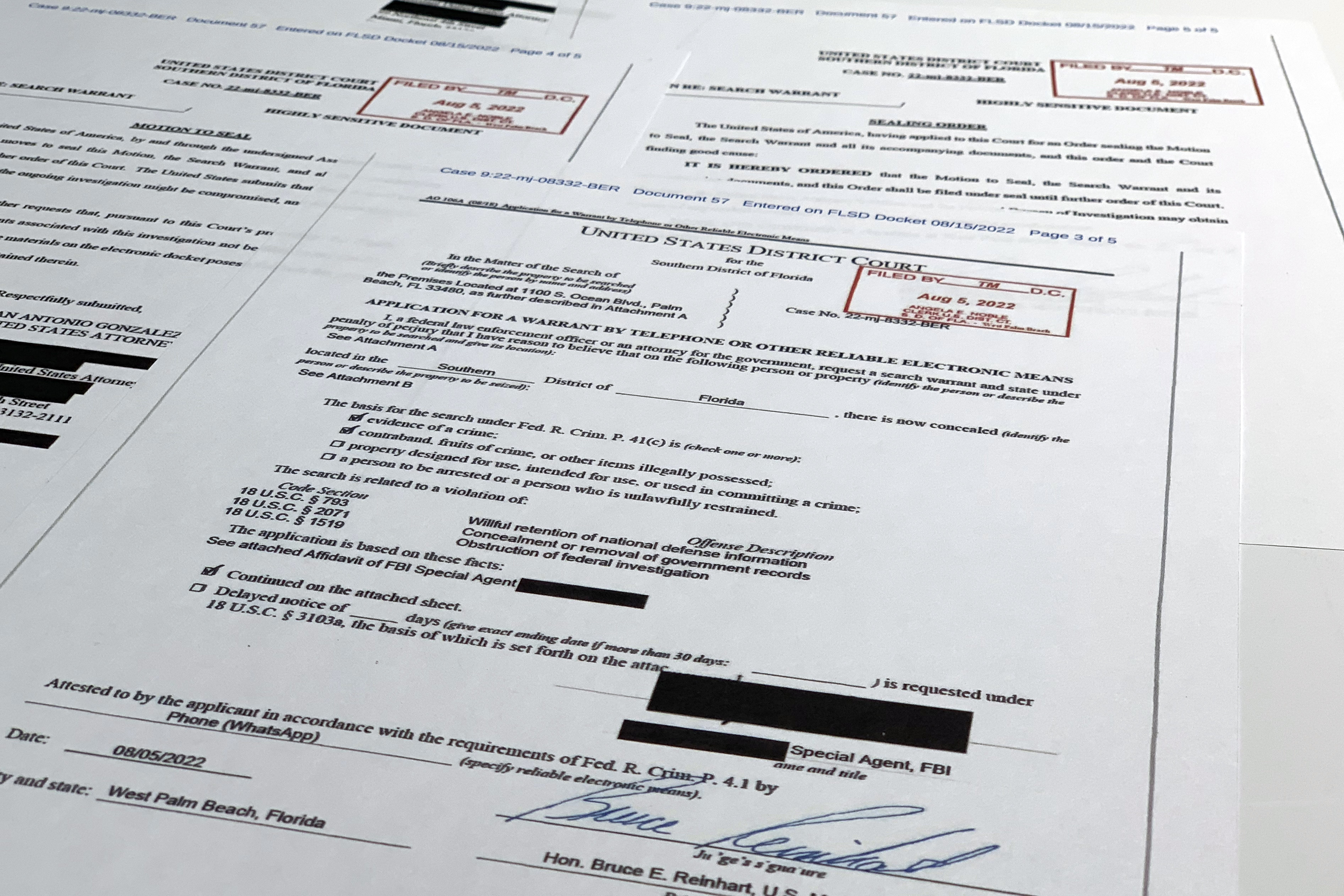 Reinhart ruled last week that he would consider unsealing portions of the affidavit after conferring with the Justice Department and determining whether proposed redactions would be sufficient to protect the ongoing criminal investigation connected to the search. But in his order, Reinhart emphasized that he may ultimately agree with prosecutors that any redactions would be so extensive that they would render the document useless.

“I cannot say at this point that partial redactions will be so extensive that they will result in a meaningless disclosure, but I may ultimately reach that conclusion after hearing further from the Government,” Reinhart wrote.

The new order underlines the historic significance of a typically secret part of the criminal investigative process, arriving just as Trump has indicated he’s preparing to mount his own attack on the FBI investigation in court. The Justice Department is due to propose potential redactions by Thursday, portending a potentially lengthy process of negotiation with Reinhart and possible appeals.

In his order, Reinhart noted that “neither Former President Trump nor anyone else purporting to be the owner of the Premises has filed a pleading taking a position” on efforts to unseal the affidavit.

Reinhart also rejected the contention that unsealing aspects of the affidavit would set a dangerous precedent, given the singular, historic significance of this case.

“Given the intense public and historical interest in an unprecedented search of a former President’s residence, the Government has not yet shown that these administrative concerns are sufficient to justify sealing,” Reinhart ruled.

Reinhart’s order echoed his decision to shoot down an effort by media organizations and conservative advocacy group Judicial Watch to unseal the entire FBI affidavit. Reinhart acknowledged that some reporting had already indicated the significance of what may have been recovered from Mar-a-Lago — some news reports described nuclear-related information and other documents related to highly classified government programs. But he said those anonymously sourced reports, whether true or not, reveal nothing about the sources and methods the government used to obtain its evidence.

“Disclosure of these facts would detrimentally affect this investigation and future investigations,” Reinhart wrote, adding, “The Government has a compelling reason not to publicize that information at this time.”

Reinhart also echoed the government’s concern about threats to those involved in the investigation if identifying information were released via court documents. He cited news reports about threats to the FBI and the recent attack by an armed man against an FBI building in Cincinnati, though he didn’t mention that he himself has reportedly faced threats.

“Given the public notoriety and controversy about this search, it is likely that even witnesses who are not expressly named in the Affidavit would be quickly and broadly identified over social media and other communication channels, which could lead to them being harassed and intimidated,“ Reinhart noted.

Another reason to keep the affidavit sealed? Trump and his family’s personal protection by the Secret Service. Reinhart noted that the document describes the physical characteristics of Mar-a-Lago.

“Disclosure of those details could affect the Secret Service’s ability to carry out its protective function,” he wrote. “This factor weighs in favor of sealing.”