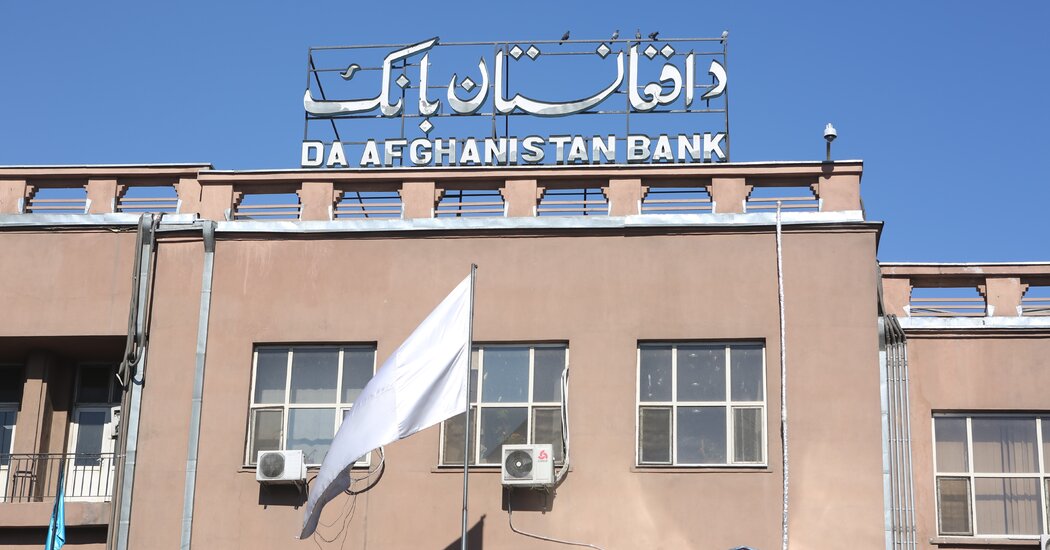 WASHINGTON — A federal magistrate judge has recommended rejecting the effort by relatives of victims of the Sept. 11 attacks to seize $3.5 billion in frozen Afghan central bank funds to pay off judgment debts owed by the Taliban — in part because doing so, she said, would effectively recognize the Taliban as the legitimate government of Afghanistan.

“The Taliban’s victims have fought for years for justice, accountability and compensation,” the judge, Sarah Netburn, wrote. “They are entitled to no less. But the law limits what compensation the court may authorize.” Those limits, she added, placed the Afghanistan central bank’s assets beyond the court’s reach.

The 43-page report and recommendation by Judge Netburn, issued on Friday, is the latest twist in a case arising from the extraordinary circumstance of a country seized by a terrorist organization that is not recognized as its legitimate government. The case has raised novel legal issues that touch on matters of foreign policy, international finance, counterterrorism and domestic politics.

The recommendation by Judge Netburn is not a final decision. A Federal District Court judge for the Southern District of New York, George B. Daniels, is supervising the litigation and has the authority to issue a ruling that disagrees with Judge Netburn’s legal analysis. And if he instead rules in accordance with her recommendation, the victims’ families could file an appeal.

Fiona Havlish, the named plaintiff in the lead group of Sept. 11 victims’ relatives who are trying to seize the funds, said that she respectfully disagreed with Judge Netburn’s conclusion that they were not entitled to the funds belonging to the Afghan central bank, known as Da Afghanistan Bank, or DAB.

“It is clear that the president wished to make these funds available to victims of terrorist attacks for which the Taliban was found liable, that the court has jurisdiction and that the Taliban controls DAB,” she said in a statement.

“As the daughter of a 9/11 victim, it makes me sick to think that Afghan victims of atrocity are being deprived of necessary resources during a time of great need,” Ms. Murphy said in a statement. “I am relieved that the judge has taken a step toward the only legally and morally correct approach — making the entire $7 billion available to Afghans to deal with the economic crisis we helped to cause.”

It is not clear what would happen to the $3.5 billion if the efforts by the Sept. 11 victims’ relatives to seize it fails. The American government does not want to send money to Afghanistan if there is a risk it will fall into Taliban hands. It is therefore possible that some or all of the funds could simply remain frozen for years, awaiting a change of circumstances in Afghanistan.

The complex saga traces back to lawsuits filed years ago by family members of victims of the Sept. 11 attacks seeking billions of dollars from a range of defendants they held responsible for their losses, including Al Qaeda and the Taliban. When such defendants failed to show up in court, judges declared them liable by default.

But with no way to collect damages, the rulings seemed like symbolic gestures until last year, when the Taliban took control of Afghanistan. As part of the fallout, the New York Fed blocked access to an account for the Afghan central bank holding about $7 billion.

The Havlish plaintiffs — about 150 people, linked to 47 estates of the nearly 3,000 people killed — moved to seize some of that money to pay off the Taliban’s judgment debt to them.

That arrangement has been a matter of dispute among victims’ relatives. Some opposed the deal as unfair, on the argument that everyone should get the same amount. Others joined outside voices — including exiled Afghans — who urged the court to reject giving any of the money to Sept. 11 families, saying it belonged to the Afghan people and should be spent on helping them at a time of a humanitarian crisis and mass starvation caused by the collapse of the country’s economy.

Against that backdrop, Judge Netburn concluded that as a matter of law, none of the Sept. 11 victims’ relatives or insurance companies were entitled to seize the frozen Afghan central bank funds. She laid out three independent legal rationales for why Judge Daniels should dismiss their requests.

First, she wrote, the court lacks jurisdiction over the Afghan central bank because it is an instrument of a foreign government and thus has sovereign immunity. While Congress has enacted a law that made a narrow exception to sovereign immunity allowing lawsuits against state sponsors of terrorism, Afghanistan has not been designated as such, and the Sept. 11 victims’ families did not sue the state of Afghanistan itself.

“The Constitution vests the president with the sole power to recognize foreign governments,” Judge Netburn wrote. “Courts may not extend such recognition either directly or by implication. Yet such recognition would be inescapably implied if this court found that the DAB is being controlled and used by the Taliban such that the Taliban may use DAB’s assets (ultimately the assets of the sovereign state of Afghanistan) to pay its legal bills.”

Finally, she wrote, even if both of those arguments were wrong, under the law, the bank must count as an “agency” of the Taliban, which she said means it must have willingly worked with the group. But the Taliban have seized control of the bank — and imposed their own leaders atop it — by force.

The court “must determine whether a bank robber can transform an unwilling bank into his agency or instrumentality,” she wrote. “The answer must be no.”