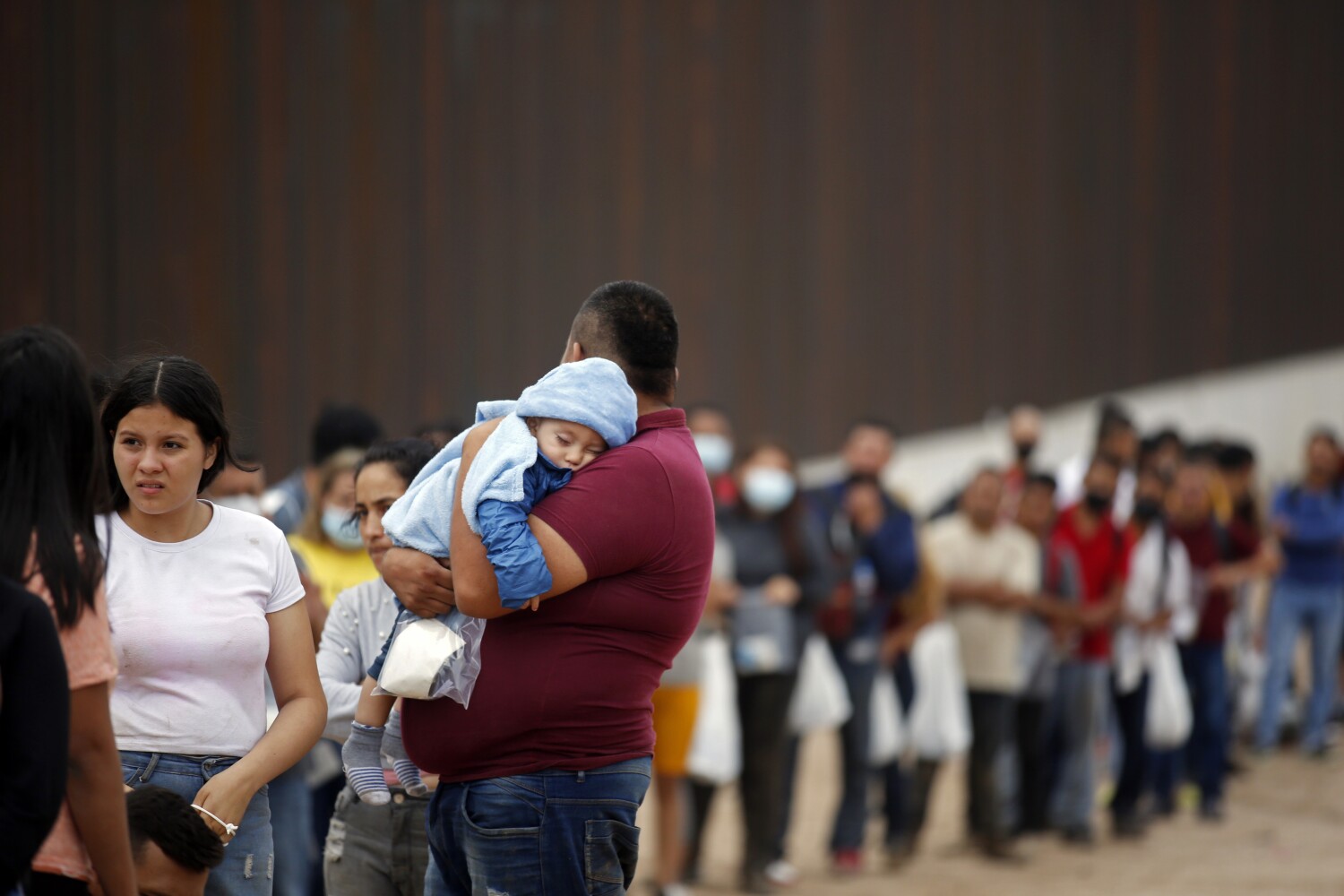 A Louisiana judge has extended his temporary block of the Biden administration’s plan to lift pandemic-related border restrictions on Monday.

In a ruling issued Friday, U.S. District Judge Robert Summerhays in Lafayette wrote that lawyers for 24 plaintiff states had established a “significant threat of injury” would arise if Title 42, a 1944 federal public health statute implemented by the Trump administration at the start of the pandemic, were to be lifted. He cited federal government figures predicting as large as a threefold increase in daily border crossings.

“The record also includes evidence supporting the plaintiff states’ position that such an increase in border crossings will increase their costs for healthcare reimbursements and education services,” Summerhays wrote. “These costs are not recoverable.”

Last week, Summerhays heard arguments from lawyers for Louisiana, Arizona and Missouri in their lawsuit with 21 other states seeking to prevent the federal government from rescinding the Trump administration’s unprecedented decision to use Title 42, citing the need to curb the spread of COVID-19.

The ruling by Summerhays, a Trump appointee, keeps Title 42 in place as the lawsuit proceeds.

The decision marks the latest example of a federal court blocking President Biden from ending restrictive Trump-era immigration policies or implementing his own. Republican-led states have also taken the Biden administration to court to prevent a 100-day moratorium on deportations and its immigration enforcement priorities, as well as to force the restart of the so-called Remain in Mexico program, which requires migrants to wait across the border for U.S. immigration court hearings.

Federal officials could appeal. But the U.S. 5th Circuit Court of Appeals, which receives cases from Louisiana, has repeatedly ruled against the Biden administration on a variety of policies.

In the case before Summerhays, attorneys general for Arizona and the other states say the U.S. Centers for Disease Control and Prevention didn’t follow proper administrative procedures that require public notice and gathering of comments before moving to end the restrictions under Title 42. They argue that should Title 42 be lifted, border crossings will increase and border states will suffer from increased strain on their healthcare, education and law enforcement systems.

The Biden administration has argued that Title 42 is not an immigration policy, but a public health restriction that is no longer necessary.

Even so, the result was that its implementation slowed immigration to the U.S.

A family in Tijuana who wanted to request asylum and advocacy groups including Innovation Law Lab sought to intervene in the lawsuit. They argued that a court order keeping Title 42 in place should only apply to states involved with the suit. Summerhays denied their request.

Alicia Duran Raymundo, her partner and their 6-year-old daughter fled El Salvador after gang members threatened to torture and kill them. She said in a news release from her lawyers last week that they wanted to live with extended family in California while pursuing asylum, but instead joined the thousands of migrants living in Mexican border towns while they wait for the U.S. to reopen its doors.

“We’ve tried many times to ask for asylum but they just tell us the border is closed,” Duran said.

Seeking asylum is a legal right guaranteed under federal and international law, regardless of how someone arrived on U.S. soil. Some of those turned away are fleeing persecution, while others pushed out by turmoil in their home countries seek jobs and security.

Lee Gelernt, deputy director of the American Civil Liberties Union’s immigrant rights project, noted that regardless of Friday’s decision, a prior ruling in Washington, D.C., District Court taking effect Monday prevents Title 42 from applying to families who face persecution or torture if they are expelled. Gelernt is lead attorney in that case.

“Hypocritically, the states that brought this lawsuit seemingly care about COVID restrictions only when they involve asylum seekers,” he said. “The lawsuit is a naked attempt to misuse a public health law to end protections for those fleeing danger.”

Migrants have been removed from the U.S. nearly 2 million times since Title 42 was first used in March 2020, in some cases to dangerous situations in which they’ve been tortured or raped.

Last month federal agents stopped migrants more than 234,088 times — surpassing a 22-year high of 221,303 in March — a figure driven partially by the arrivals of Ukrainians fleeing war. But the total doesn’t reflect the actual number of people encountered because quick expulsions under Title 42 lack the same consequences as proper deportations, including civil penalties and criminal prosecution, and enable many single adults to make repeated attempts to get into the country undetected.

Nearly 21,000 Ukrainians have requested to enter the U.S. at ports of entry along the Mexico border, the vast majority near San Diego, according to the Transactional Records Access Clearinghouse, a nonpartisan research center at Syracuse University. Ninety-five percent of Ukrainians were allowed to enter, compared with just 11% of people from other countries.

Nearly half of the migrants stopped by border agents are from countries outside of Mexico and Central America’s Northern Triangle, with increases in migration seen most recently recently among Brazilians, Cubans and Haitians. Trends have shifted recently away from mostly families to mostly single adults, U.S. Customs and Border Protection data show.

Federal officials rely on Mexico and other countries to receive migrants subject to Title 42, which has led to people from Mexico, Guatemala, Honduras and El Salvador most frequently being expelled. Exemptions are made for humanitarian reasons and when Mexico or another country won’t take those whom the U.S. wants to remove. The policy has kept out about 60% of migrants who have sought entry since it started, according to CBP data.

Whenever Title 42 is lifted, the U.S. will lean more heavily on Mexico and other countries in the region to stop migrants from around the globe who reach Latin America from continuing north. Department of Homeland Security officials visited Panama and Costa Rica in recent weeks to discuss their shared challenge.

The CDC announced April 1 that it would end Title 42 by May 23, drawing the ire of Republicans and some Democrats who said the administration was unprepared for an increase in migrants arriving at the border.

When border officials said last month that they had started processing more migrants under regular immigration law, Summerhays ordered a stop to the wind-down. In a ruling last month, Summerhays wrote that relaxing Title 42 restrictions prematurely would inflict “unrecoverable costs on healthcare, law enforcement, detention, education, and other services” on the states that brought the litigation.

In plans for lifting Title 42, Biden administration officials have prepared for as many as 18,000 migrants attempting to cross the border each day. That’s compared to an average of just under 5,400 per day between May 10 and 16, according to CBP figures provided as part of the Louisiana lawsuit.

The Homeland Security Department released a plan that includes moving 600 more agents to the border, adding 5,000 beds to border processing facilities and vaccinating migrants against COVID-19.

Homeland Security Secretary Alejandro N. Mayorkas told reporters this week during a trip to Texas’ Rio Grande Valley that he expects border crossings to increase just after Title 42 is lifted. But he said those crossings would eventually plateau and decline.

Whenever Title 42 is lifted, Mayorkas said Tuesday, immigration consequences will resume. People who enter the U.S. and are placed in formal enforcement proceedings can make claims to stay, but if they don’t qualify “they are removed, and they have an enforcement record on the books.”

Republicans last month blocked a COVID-19 relief bill from moving forward without a vote on Title 42. But a growing number of Democrats have signaled they are willing to vote on an amendment to keep the border policy in place.