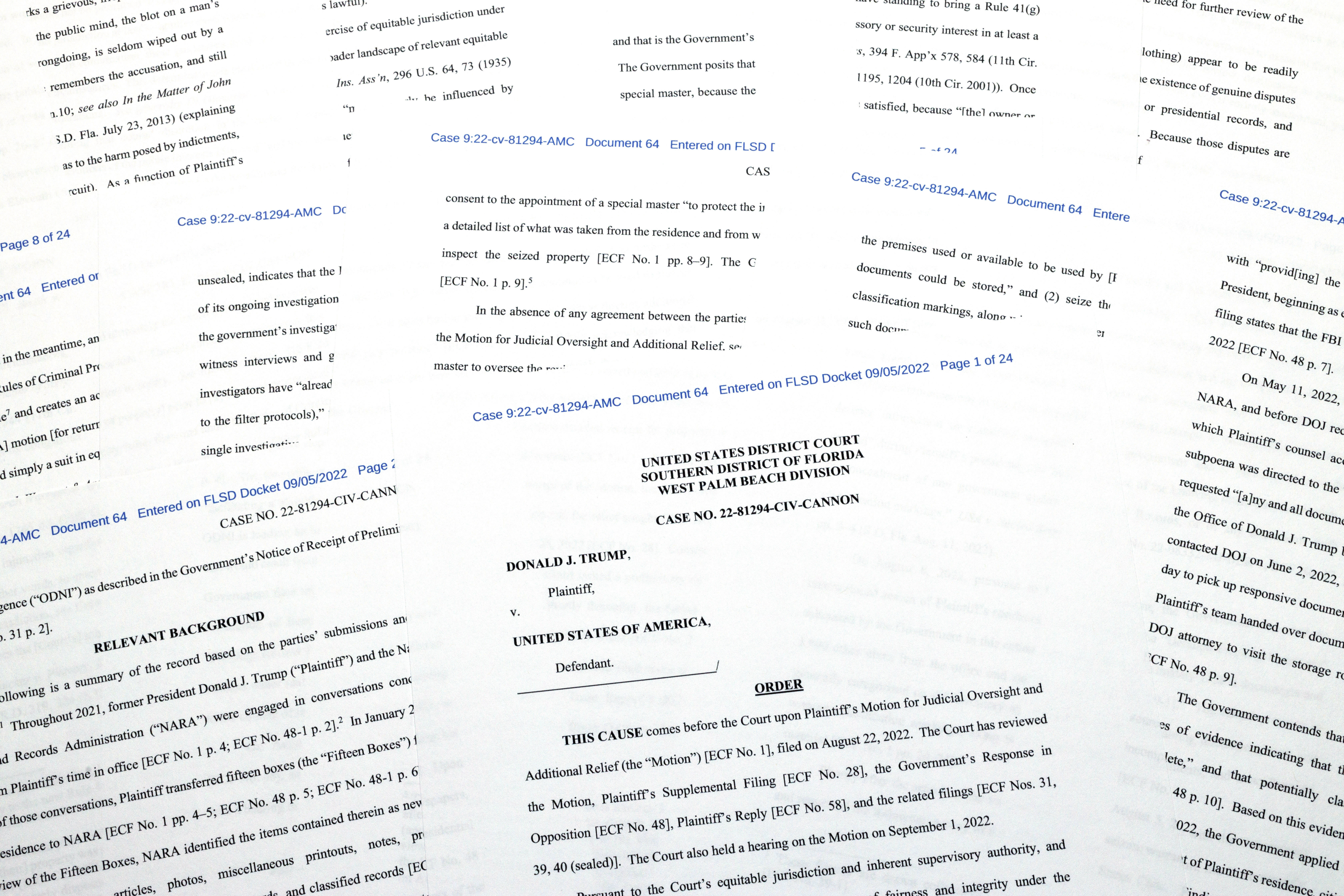 Cannon instead appointed Raymond Dearie, a senior federal judge in New York, to lead an independent review of the seized materials. He was one of two potential special masters proposed by the Trump team, and prosecutors said they found him acceptable even though he was not one of their initial picks.

In a signed filing released by the court on Thursday night, Dearie accepted the task. Cannon urged him to complete his review by Nov. 30 — more than a month after the Oct. 17 deadline the Justice Department had most recently asked Cannon to set.

While Cannon’s timeline appears to extend Dearie’s review well past the November midterm elections, she did instruct him “to prioritize review of the approximately 100 documents marked as classified (and papers physically attached thereto),” meaning it’s possible prosecutors could regain access to some or all of those materials before they get another look at the other records seized in the FBI’s Aug. 8 search of the Trump’s Florida estate.

Last week, the Justice Department appealed Cannon’s order to appoint a special master and indicated it would seek relief from the 11th U.S. Circuit Court of Appeals if she did not agree to delay aspects of her ruling by Thursday night. .

The ruling is another setback for federal prosecutors, who have expressed alarm at the extraordinarily sensitive records they found in boxes intermingled with Trump’s personal items in his Mar-a-Lago storage room, as well as some recovered from his office. The Justice Department has warned that Cannon’s Sept. 5 order — which enjoined the department from furthering its criminal review of the documents seized by FBI agents — had also disrupted a parallel risk assessment of those documents by the intelligence community. Though Cannon allowed that review to continue, the Justice Department emphasized that her order had sown confusion within the executive branch.

In one nod to the Justice Department, Cannon ordered Trump to shoulder the full cost of Dearie’s review, as well as that for any staff or associates he hires.

Cannon also clarified certain steps the department could take to further its criminal investigation even while the documents remained off-limits, such as “questioning witnesses and obtaining other information about the movement and storage of seized materials, including documents marked as classified, without discussion of their contents.”

She also said the Justice Department was free to brief congressional leaders “with intelligence oversight responsibilities” on the seized materials.

Cannon’s ruling denying the Justice Department’s stay makes clear she simply did not buy prosecutors’ argument that an intelligence community review of the national security impact of the presence of the information at Mar-a-Lago could not proceed while the criminal investigation remains temporarily halted.

“The Government’s submissions, read collectively, do not firmly maintain that the described processes are inextricably intertwined, and instead rely heavily on hypothetical scenarios and generalized explanations that do not establish irreparable injury,” she wrote.

However, the judge also emphasized that she was giving Justice Department personnel some leeway to participate in the national security assessment even as she maintains her order blocking the use of any of the documents in the criminal probe.

Cannon based her ruling in part on what she said were “media leaks” describing the seized materials.

While the Justice Department had raised alarms about a delay in its criminal investigation risking the unauthorized disclosure of classified information, the judge suggested that the risk of such was speculative, but that the evidence of ongoing leaks related to the investigation was concrete.

“There has been no actual suggestion by the Government of any identifiable emergency or imminent disclosure of classified information arising from Plaintiff’s allegedly unlawful retention of the seized property,” Cannon wrote. “Instead, and unfortunately, the unwarranted disclosures that float in the background have been leaks to the media after the underlying seizure.”