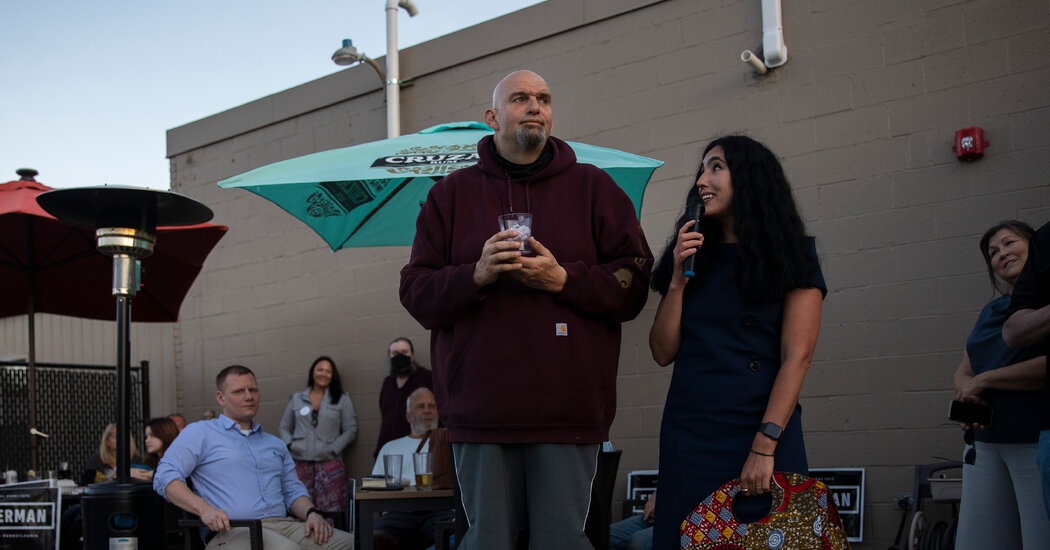 Lt. Gov. John Fetterman of Pennsylvania, the front-runner for his state’s Democratic Senate nomination, said on Sunday that he had had a stroke on Friday and was recovering.

“I had a stroke that was caused by a clot from my heart being in an A-fib rhythm for too long,” he said in a statement. “The amazing doctors here were able to quickly and completely remove the clot, reversing the stroke, they got my heart under control as well.”

The incident has kept him off the campaign trail for the final weekend before Tuesday’s primary election in one of the nation’s most closely watched Senate contests. It was unclear when he would return to in-person campaigning.

“The good news is I’m feeling much better, and the doctors tell me I didn’t suffer any cognitive damage,” he said in the statement from Penn Medicine Lancaster General Hospital. “I’m well on my way to a full recovery.”

“They’re keeping me here for now for observation, but I should be out of here sometime soon,” he added.

The crucial swing state will hold its primary on May 17, with key races for a U.S. Senate seat and the governorship.

Mr. Fetterman had been scheduled to host a meet-and-greet in Lancaster County, Pa., on Friday morning, but his spokesman, Joe Calvello, said at the time that the team decided to cancel the event because “John was not feeling well this morning so we are taking the necessary precautions.”

The campaign canceled events across the state on Friday evening, Saturday morning and again on Sunday, but gave scant information about the state of Mr. Fetterman’s health over the weekend. Asked why the campaign waited days to share the news that a major Senate candidate had been hospitalized with a stroke, a matter of intense public interest, Mr. Calvello replied, “John’s condition was evolving in real time since Friday. We wanted to put out something once we had a clearer picture of his health.”

In the statement and in an accompanying video, Mr. Fetterman said he had been feeling unwell and that his wife, Gisele Barreto Fetterman, had insisted he go to the hospital to get checked out.

The development upended his ability to engage voters in-person during the most intense stretch of the race. Still, he has been leading his most prominent Democratic rival, Representative Conor Lamb, by double digits in sparse public polling.

“I just found out on live TV that Lieutenant Governor Fetterman suffered a stroke,” Mr. Lamb wrote on Twitter. Referring to his wife, he continued, “Hayley and I are keeping John and his family in our prayers and wishing him a full and speedy recovery.”

State Representative Malcolm Kenyatta, a Senate candidate from Philadelphia, said his “prayers are with him and his family as he recovers from this stroke. I look forward to seeing him back on the campaign trail soon.”

And Mehmet Oz, the celebrity doctor and Republican Senate candidate, said that he had “cared for atrial fibrillation patients and witnessed the miracles of modern medicine in the treatment of strokes.”

“I am thankful that you received care so quickly,” he said. “My whole family is praying for your speedy recovery.”

When are the key races taking place? The primary gauntlet is already underway. Closely watched races in Pennsylvania, North Carolina and Georgia will be held in May, with more taking place through the summer. Primaries run until September before the general election on Nov. 8.

Throughout the campaign, Mr. Fetterman’s blunt-spoken liberal politics and penchant for wearing shorts and hoodies at public events appear to have resonated with much of the Democratic base.

“If somebody thinks I’m smarter if I’m in a suit, so be it,” Mr. Fetterman said in an interview on Thursday after an event in York, his hometown, where he had given an energetic stump speech and worked a crowded bar. “I would rather have people know what they’re getting and this is who I am.”

Senator Ben Ray Luján, a New Mexico Democrat, had a stroke earlier this year and has spoken about his difficult path to recovery. It was not immediately clear what Mr. Fetterman’s rehabilitation process would look like.

“The doctors have assured me that I’ll be able to get back on the trail, but first I need to take a minute, get some rest, and recover,” he said.