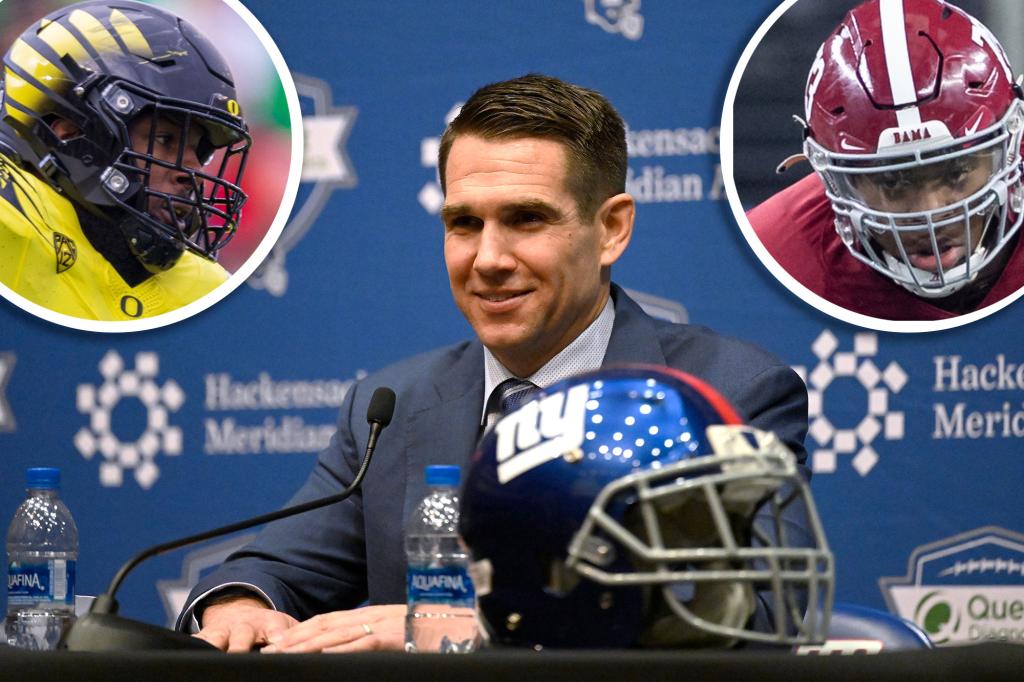 Joe Schoen knocked his first NFL draft out of the park.

With the fifth and seventh picks, Schoen collected a pair of players who at times during the draft season were viewed as possible No. 1-overall picks.

With edge Kayvon Thibodeaux and RT Evan Neal, Schoen took a leap toward making the Giants feared again one day.

Somewhere Up in Big Blue Heaven, the late, great Wellington Mara is reminding friends of the kind of team he forever yearned to field to unnerve the opponent: “Buckle up your chinstraps, pally.”

Thibodeaux, the big-city kid with the outsized personality from South Los Angeles with a chip the size of the Empire State Building on his 6-foot-4, 254-pound shoulders.

Thibodeaux: “I’m really competitive and I’m hungry, and I feel like New York is a pinnacle of a dog-eat-dog world.”

Neal, asked if he senses that Thibodeaux might be talking to him in practice: “I really don’t care whether he does, I’m gonna talk with my shoulder pads.”

Schoen was cool, calm and collected in his first time in the war-room hot seat.

“It was calm,” coach Brian Daboll said. “You can be that way when you’re prepared.”

Schoen grabbed Thibodeaux first because in his view the pass rusher drop-off was steeper than the offensive tackle drop-off knowing that he would be able to choose from whichever two were left after the Panthers, who selected Ickey Ekwonu.

Schoen and Daboll were comfortable enough with Thibodeaux to ignore the publicized and whispered misconceptions about him on the field and off. They dismissed the talk of Thibodeaux’s hot-and-cold motor. Of his brand supposedly being more important to him than the game.

Schoen and Thibodeaux seem like The Odd Couple, but they bonded after extensive meetings, over FaceTime as well as over Korean barbecue in Eugene, Ore.

“We really got to know the kid maybe more than any player in this draft,” Schoen said. “Like the personality, and like the player.”

And in Daboll, Schoen has a head coach who knows how to handle big and unconventional personalities.

“I like coaching good guys,” Daboll said. “When you’re in the National Football League for 22 years, you come across a lot of different characters, and as long as they love football and they’re a pro on and off the field … I have six kids, they all have different personalities, so that’s the job of a coach too, to learn your players, what makes ’em tick, how to push ’em when they get need pushed, how to hug ’em when they need a hug. Felt very comfortable with him.”

Get the latest updates on every New York Giants pick in the 2022 NFL Draft, plus hometown analysis from the New York Post.

Thibodeaux credited Michael Strahan with being a mentor and showing him the ropes. The Giants hope Thibodeaux and Azeez Ojulari can be double trouble for DC Wink Martindale and a godsend for Leonard Williams.

The offensive line is not fixed yet, of course. That won’t be Strahan and Lawrence Taylor turning the corner and rushing the passer. But the Giants don’t have to be laughingstocks in trench warfare anymore.

“They both have good size, good length,” Daboll said. “Kayvon is quick off the ball, I think he has a wide variety of pass-rush moves, but he can also set an edge for us on our defense. … We envision Kayvon doing a lot of different things for us. And Evan … it takes a guy to go the long route to get to the quarterback. He’s got long arms, he’s a big, massive man.”

“I’m a country boy but at the end of the day, man, I know how to fit in well with the city, so I’m just excited,” Neal said.

Thibodeaux was downright animated and euphoric on stage with Make-A-Wish recipient Sam Prince, who had announced the pick.

“That’s the type of juice we’re looking for,” Schoen said, and smiled.

On this night, Giants fans can hail him as their Broadway Joe.