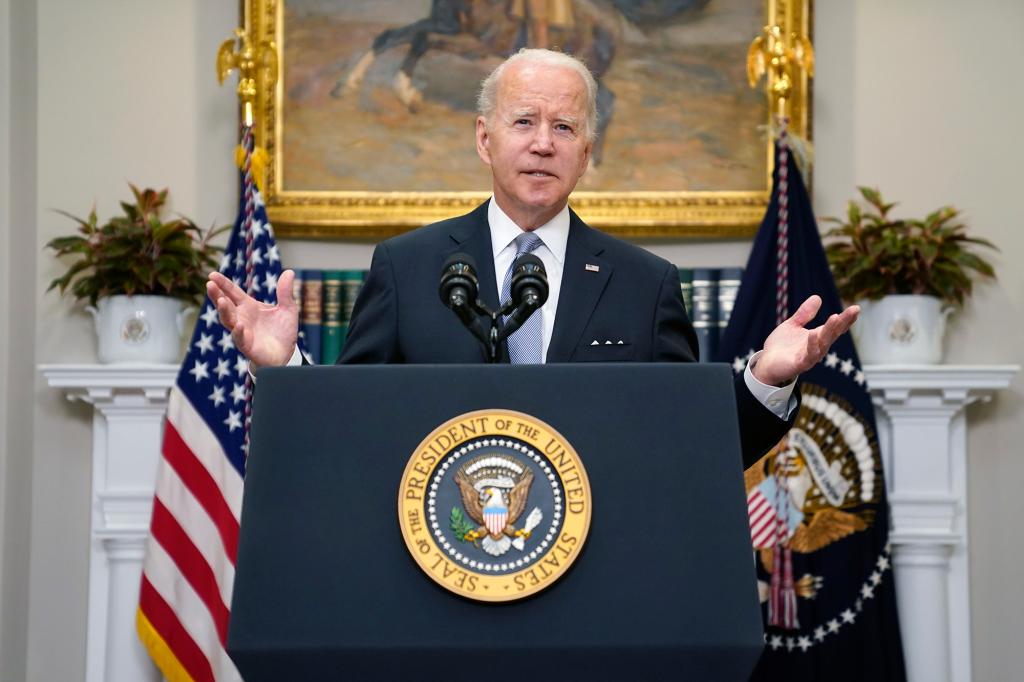 With the Biden-Harris administration’s epic failures from skyrocketing inflation and gas prices to the wide-open southern border, record crime and weakness abroad, American voters are turning away from the Democratic Party in staggering numbers.

Even the Democrats’ most reliable constituencies are heading for the exits in droves: Support for the White House has been steadily — and dramatically — eroding among black, Hispanic, women and younger voters.

One demographic group that has been stubbornly faithful to the Democrats but should join the others in rethinking its support is Jewish voters. Historically liberal, most Jewish Americans have long voted Democrat, confounding Republican presidents who provided extraordinary support to Israel and other issues important to the Jewish community.

After decades of presidents of both parties promising to move the US embassy to Jerusalem, Trump had the courage to actually do it.

He reversed the Obama-Biden pro-Iran appeasement policies that strengthened the hand of Israel’s — and the world’s — gravest threat to peace. His maximum-pressure campaign of withdrawing the United States from the dangerous nuclear agreement and imposing crippling sanctions countered Iran’s influence and pressured the regime to abandon some of its malign activities. Further, he eliminated ISIS and Iran’s chief terrorist leader as he worked to decimate Islamist enemies in the region.

The Trump administration cut aid to Palestinian governing bodies with leaders who refused to negotiate with Israel and recognized the strategically vital Golan Heights as part of Israel.

At the United Nations — where Israel-bashing is de rigueur and the Jewish state is singled out for unfair treatment more than any other nation — Trump removed America from the Human Rights Council due to the group’s blatant bias and ensured that the US delegation stood unequivocally with our ally.

Under Trump — unlike during the Obama years — the United States stopped rebuking Israel for its settlements in the West Bank and quit condemning Israel for simply defending itself from terrorist attacks targeting civilians.

The Trump administration was a strong opponent of the shamelessly anti-Semitic BDS (boycott, divestment and sanctions) movement — supported by three out of four House Democrats known as “the Squad” — which seeks to isolate Israel and destroy its economy.

Standing up for religious freedom and against religious persecution and offsetting the UN’s (and former Secretary of State Hillary Clinton’s) singular focus on the largely manufactured threat of “Islamophobia,” the Trump administration hosted a Summit on Combatting Anti-Semitism. Trump also signed an executive order giving Jews greater legal protections against persecution.

Democrats routinely smeared Trump as “Hitler” and “anti-Semitic.” It was a false and disgusting trope, even as the Democratic Party drifted further from bipartisan support against anti-Semitism and for Israel. Reports suggested that Trump was responsible for a rise in hate crimes — ignoring the fact that for the previous eight years under Obama-Biden, attacks on Jews were among the top three hate crimes (although they rarely made headlines).

Biden, meanwhile, has largely followed his fellow Democrats in moving away from strong, steadfast support for Israel. Many in the party (most prominently Rep. Ilhan Omar) openly embrace anti-Semitic rhetoric and policies, and the failure of Democratic leaders to condemn both is disturbing.

Worse, Biden is trying desperately to reanimate the dangerous Iran nuclear deal, which would facilitate Tehran’s nuclear ambitions and undercut our Arab allies (and their burgeoning relationships with Jerusalem) while endangering Israel’s very existence.

While it’s clear that the new Democratic Party has turned its back on both American Jews and Israel in significant ways, Jewish voters continue to reward its candidates. Despite his extraordinary record, Trump lost ground with them in the 2020 election. In a recent interview, Trump lamented the political reality: “The Jewish people in the United States either don’t like Israel or don’t care about Israel.”

Most Jewish voters chose Biden and vote Democrat for various reasons, but they should seriously consider joining other traditional Democrat voting blocs in abandoning the party. It’s long past time for Jewish voters to end their longstanding — but unrequited — loyalty to the Democrats, who clearly no longer care about their concerns.

Monica Crowley served as assistant secretary of the Treasury and is the host of the Monica Crowley Podcast. Andrew Stein is a former president of the New York City Council.