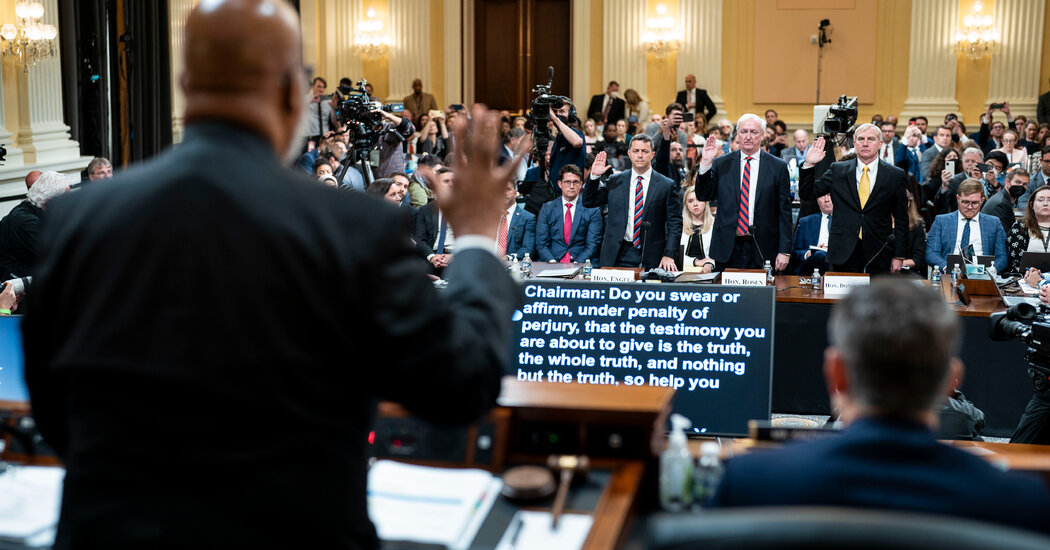 WASHINGTON — The House committee investigating the Jan. 6 attack on the Capitol painted a vivid picture on Thursday of how former President Donald J. Trump directed a wide-ranging bid to strong-arm the Justice Department into overturning the 2020 election, the most brazen attempt by a sitting president since Watergate to manipulate the nation’s law enforcement apparatus to keep himself in power.

In a stunning display of evidence, including testimony from top officials who resisted the former president’s efforts, the committee laid out how Mr. Trump tried repeatedly to use the Justice Department to interfere in the election. In near-daily conversations, he badgered its leaders to act on unsubstantiated claims of election fraud, including wild internet hoaxes, accusing them of failing to do their jobs. He explored naming a conspiracy theorist who was circulating outlandish stories of voting irregularities to serve as a special counsel to look into possible election misdeeds.

“Why don’t you guys just seize machines?” Mr. Trump demanded to know at one point, later calling a top official at the Homeland Security Department when informed that voting machines fell under that agency’s purview, not the Justice Department’s.

When top Justice Department officials repeatedly told him that they had investigated and debunked his allegations of widespread election fraud, Mr. Trump said they need not find evidence. “Just say the election is corrupt and leave the rest to me,” he told them.

And when the officials refused to comply, Mr. Trump embraced a plan to remove the acting attorney general and install a loyalist, Jeffrey Clark, to do his bidding. During a heated showdown in the Oval Office, only the threat of a mass resignation at the department persuaded Mr. Trump to back down.

With testimony and new documents, the committee used its fifth public hearing to present a portrait of an embattled Justice Department that worked frantically to stave off a constitutional crisis driven by a president who refused to relinquish his power, and showed how close the country came to such a breakdown.

“He pressured the Justice Department to act as an arm of his re-election campaign,” Representative Bennie Thompson, the Mississippi Democrat who is the chairman of the committee, said of Mr. Trump. “He hoped law enforcement officials would give the appearance of legitimacy to his lies, so he and his allies had some veneer of credibility when they told the country that the election was stolen.”

Mr. Rosen testified on Thursday that he attended a meeting at the Oval Office later that afternoon in efforts to save his job and stave off a calamity that would have engulfed the nation.

But Mr. Trump appeared unmoved by the implications of what he was asking. “What do I have to lose?” he asked the top department officials, according to testimony on Thursday from Richard P. Donoghue, who was acting deputy attorney general.

The panel also presented evidence that after the Jan. 6 attack, at least six Republican members of the House who played leading roles in Mr. Trump’s efforts to use Congress to overturn the election sought pardons for themselves and for all the Republicans who voted to reject electoral votes for Mr. Biden. The list, according to the testimony of Cassidy Hutchinson, an aide to Mark Meadows, the White House chief of staff, included Representatives Matt Gaetz of Florida, Mo Brooks of Alabama, Andy Biggs of Arizona, Scott Perry of Pennsylvania, Louie Gohmert of Texas and Marjorie Taylor Greene of Georgia.

Mr. Biggs, Mr. Perry and Mr. Gohmert denied that they had ever sought pardons for themselves. Ms. Greene called the testimony about her “gossip and lies.” Mr. Brooks acknowledged that he had sought pardons for more than 100 Republicans in Congress after the violence of Jan. 6, but said he did so because he was concerned that the “Democrats would abuse the judicial system by prosecuting and jailing Republicans who acted pursuant to their constitutional or statutory duties.”

Mr. Gaetz did not immediately respond to a request for comment.

While these representatives were not all directly tied to the pressure on the Justice Department, the committee shed more light on the prominent role Mr. Perry played in Mr. Trump’s effort to weaponize the agency.

Mr. Perry introduced Mr. Clark to Mr. Trump the day after he and other Republicans met at the White House to discuss ways to overturn the election outcome. He pushed Mr. Meadows to have Mr. Trump install Mr. Clark as attorney general. And he encouraged Mr. Donoghue to give Mr. Clark more ability to “do something” about Mr. Trump’s fraud claims.

The session also fleshed out the role of a Mr. Clark, a little-known department official who was the key man in Mr. Trump’s plan to wield the agency’s power to accomplish his goals. Mr. Clark was the head of the environmental and natural resources division, and the acting head of the civil division. He not only embraced Mr. Trump’s false election fraud claims, but pushed Mr. Rosen to send a letter to Georgia election officials that falsely claimed that the Justice Department “identified significant concerns” that would affect the state’s election results.

The committee presented evidence that the White House knew that the plan was unlawful. “Congratulations, you just admitted your first step or act you’d take as attorney general would be committing a felony,” Eric Herschmann, a lawyer in the White House Counsel’s Office, told Mr. Clark upon hearing of it, according to a taped deposition played on Thursday.

Federal agents obtained a warrant to search Mr. Clark’s home on Wednesday and seize his phones. What they were looking for remains unclear. Mr. Clark did not respond to requests for comment about the search warrant or about the hearing.

The hearing also made clear that Mr. Trump had a second secret ally inside the department, a former lawyer in the White House budget office named Ken Klukowski. After the election, Mr. Klukowski worked with John Eastman, a lawyer who helped create “alternate” slates of electors in swing states that would falsely say Mr. Trump had won.

After working with Mr. Eastman, Mr. Klukowski joined the Justice Department on Dec. 15, 2020, and was specifically assigned to work under Mr. Clark, said Representative Liz Cheney, Republican of Wyoming and the committee’s vice chairwoman. There, he helped Mr. Clark draft the Georgia letter, which included some of Mr. Eastman’s theories about alternate slates of electors.

Mr. Trump’s allies drafted a lawsuit for the department to present to the Supreme Court, a request that Steven A. Engel, the former head of the Office of Legal Counsel, described as “certainly unusual” and “meritless.”

The panel reiterated how Mr. Trump and his allies searched for any theory to try to keep him in power, even persuading the acting defense secretary to call the Italian government to investigate the debunked “Italygate” conspiracy that Italian defense contractors had used satellite technology to flip votes for Mr. Trump to Joseph R. Biden Jr.

In mid-December, he asked Sidney Powell, a former federal prosecutor who was circulating an array of groundless theories of widespread election fraud, to be a special counsel to investigate such allegations, according to testimony by Ms. Powell the panel played on Thursday.

The hearing captured in vivid detail how Mr. Rosen and Mr. Donoghue fought conspiracy theories and false claims of fraud, playing a high-stakes game of Whac-a-Mole against an array of figures who were responding to Mr. Trump’s demand for evidence of wrongdoing by feeding him a steady stream of dubious material.

After receiving an video detailing the Italygate theory, Mr. Donoghue wrote in an email that it was “pure insanity,” and on Thursday he told the committee that it was “patently absurd.”

There was audible laughter in the hearing room when Mr. Donoghue recounted how he told Mr. Clark he was unqualified to be attorney general: “You’re an environmental lawyer. How about you go back to your office, and we’ll call you when there’s an oil spill?”

The story of how Mr. Trump tried to intervene in the Justice Department has been well documented by news reports, the Senate Judiciary Committee and the House Jan. 6 committee. But some of that evidence took on fresh urgency in the context of the hearing.

Representative Adam Kinzinger of Illinois, a Republican who led the questioning, explored Mr. Trump’s most infamous response to being told that the department had not found evidence of election fraud. “That is not what I’m asking you to do,” Mr. Trump replied, according to Mr. Donoghue’s testimony. “I’m asking you to say it was corrupt and leave it to me and the Republican Congress.”

Mr. Trump wanted the department to “declare the election was corrupt even though he knew there was absolutely no evidence to support that statement,” Mr. Kinzinger said. “The president didn’t care about actually investigating the facts. He just wanted the Department of Justice to put its stamp of approval on the lies.”

The panel is planning at least two more hearings for July, according to Mr. Thompson. Those sessions are expected to detail how a mob of violent extremists attacked Congress in Mr. Trump’s name and how Mr. Trump did nothing for more than three hours to call off his supporters.