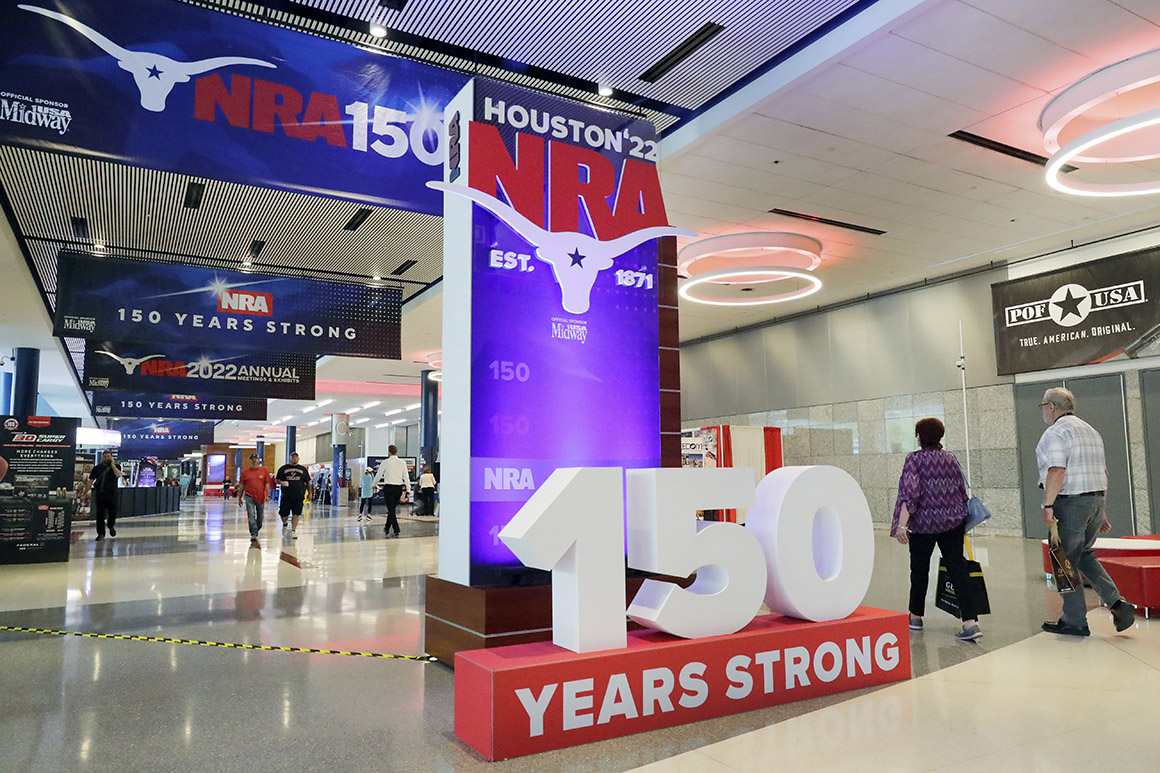 In Uvalde, a makeshift memorial of white wooden crosses had gone up for the 19 children and two adults slain. But at the NRA meeting in Houston, less than 300 miles away, the shooting had been reduced to a sling stone in the broader culture wars. The slaughter, it was universally agreed, was a tragedy. But gun owners saw themselves as set upon, too.

The Second Amendment, former President Donald Trump said, was “totally under siege.” Sen. Ted Cruz, a Texas Republican, said the “real goal” of many politicians on the left “is disarming America.” Kristi Noem, the Republican governor of South Dakota who, like Cruz, may run for president in 2024, warned, “Now is not the time to cave to the woke culture.”

His wife, Ana, gestured to the TV cameras and demonstrators outside: “This is all propaganda,” she said. “They’ll use anything to make us look bad.”

On Friday, as the NRA opened its Memorial Day weekend conference, Trump said that if he runs for president again in 2024 and wins, he will adopt a more militaristic approach to public safety, pledging to “crack down on violent crime like never before.”

But beyond that, the reaction by Republicans and the gun lobby to Uvalde followed traditional lines. They called for more spending on school security measures and mental health, while pointing to gun violence in heavily populated, liberal cities. In interview after interview, conference-goers volunteered the federal government’s $40 billion aid package to Ukraine as evidence that the government could afford to spend money hardening schools.

Some, including at least one gun seller, said they could support enacting additional, though limited, gun restrictions. But they were no more prevalent than the conference attendees who were entertaining conspiracy theories, uncertain whether the left was setting them up.

“Why did it happen three days ago?” asked Jim Hollis, a lifetime NRA benefactor from St. Louis. “I’m not sure that there are not forces someplace that somehow find troubled people and nurture and develop them and push them for their own agendas.”

Hollis, who asserted the shooter in Uvalde “could have walked in there with a baseball bat and possibly killed as many kids,” feared the “the attack on gun rights” was “strengthening” after Uvalde.

“There are people who thought they could use this Uvalde situation to dampen this [meeting],” he said.

Said another man, who declined to give his name, at the conference: “It’s straight out of a playbook.”

The NRA meeting was not unaffected by the shooting. Several musicians who had planned to perform at the event — and whose audiences are broader than a GOP primary electorate — did cancel on the NRA. Larry Gatlin, of the Gatlin Brothers, told CNN he “didn’t think it was a good time to go down to Houston and have a party.”

Texas GOP Gov. Greg Abbott, who had been scheduled to speak at the conference, elected to return to Uvalde instead, though he recorded a video message for the NRA. Daniel Defense, the company that made the gun used in Uvalde — and which posted an image on social media of a small child holding a gun prior to the mass shooting — pulled out.

But there’s a reason that Trump, Cruz and Noem, among others, were all on hand.

“If you’re a politician with a long-term vision, these are opportunities to stand up for the Second Amendment when it’s not easy to do, which could prove useful for a politician, perhaps not in today’s news cycle, but down the road,” said John Thomas, a Republican strategist works on House campaigns across the country.

He said he could envision cutting an ad featuring a Republican’s remarks at the conference: “When times were tough, and the weaker RINOs and liberals wanted to take your guns, you know, such and such stood up for your right to protect yourself and your family.”

It’s that political incentive that explains why, for many Republicans, attendance at the NRA convention was not problematic at all — and also why passage of gun restrictions remains so unlikely. Nationally — and even in heavily Republican Texas — public polling reflects broad support for stricter gun measures. But in recent years, Texas lawmakers have loosened gun laws, not made them more restrictive.

“You can look at the public opinion data and see, yes, there are Republicans who will support things like background checks and ‘red flag laws,’” said James Henson, director of the Texas Politics Project at the University of Texas at Austin, which has polled regularly on the issue. “But the political debate appeals to other impulses that are also evident in public opinion that suggest it is very easy to present Republican voters with slippery slope-type arguments that hinge on negative partisanship and switch the frame of the debate.”

Henson said, “So the debate isn’t about are there reasonable compromises here that might reduce the possibility of events like this,” but rather the GOP’s capitalization on a politically salient message that “Democrats want to take away your guns and are fundamentally against the Constitution and are enemies of Second Amendment rights and therefore rights in general.”

That’s precisely the case that Trump made on Friday, when he derided calls for stricter gun measures as a first step to “total gun confiscation.”

After he finished speaking, as conference-goers left the hall, they were met on the sidewalk by demonstrators who demanded to know if there were any additional gun restrictions they could agree to.

For the most part, the answer was “No.”

“These people, year after year, tragedy after tragedy, it’s the same damn thing over and over again,” said Roland Gutierrez, a Democratic state senator whose district includes Uvalde. “I sometimes think these guys just double down on their madness … rallying up their base of constituents that believe that even mentioning guns is infringing on their Second Amendment rights.”

“It’s mental health and the devil,” he said, in reference to the explanations of gun rights supporters. “And it’s unacceptable … It’s unconscionable.”

Nancy Vu contributed to this report.