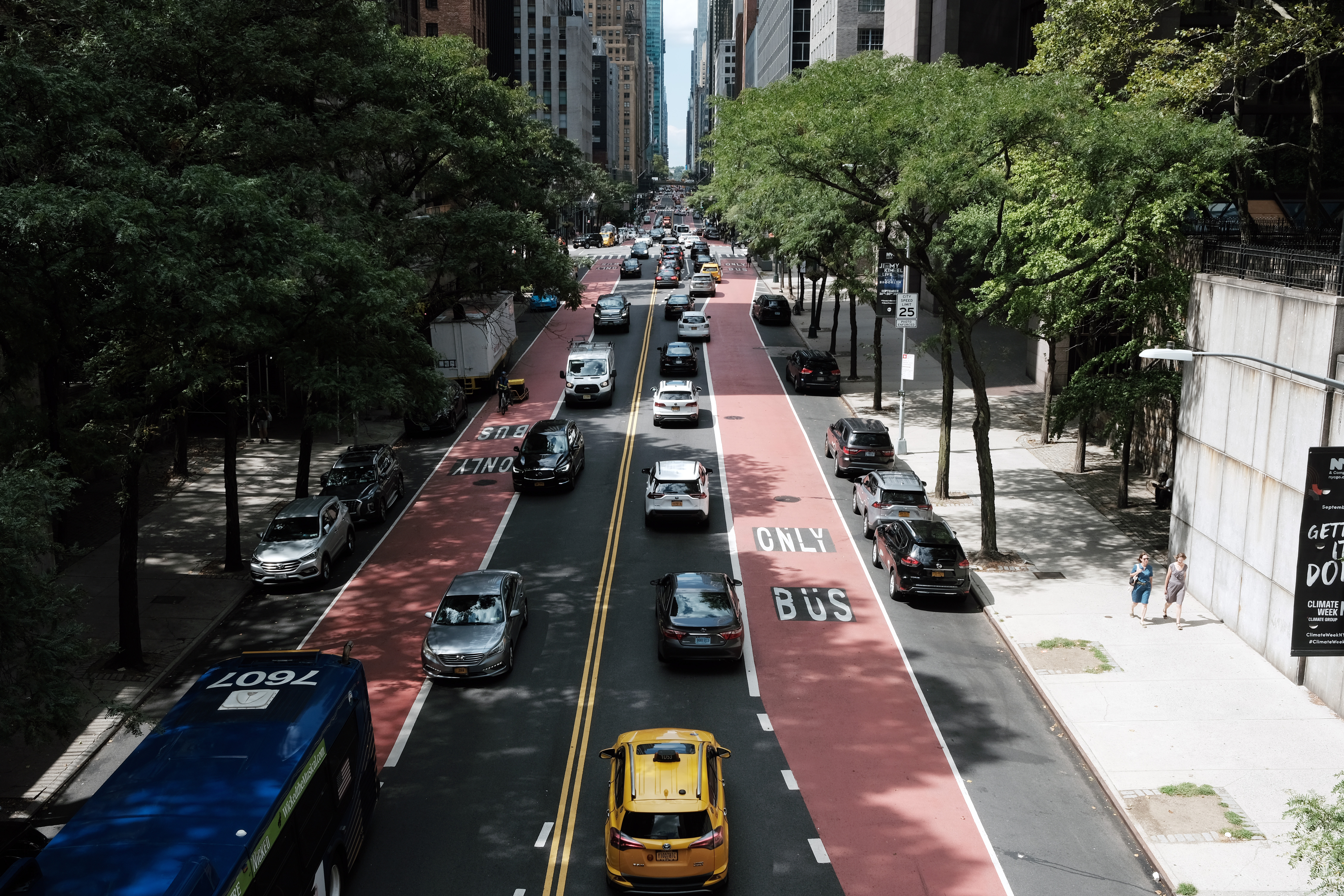 What matters is the bipartisan pushback she’s getting at home and across the Hudson River in New Jersey.

A Staten Island congresswoman fears the city’s most far-flung and car-dependent borough would shoulder much of the cost. A Bronx congressman says the plan would burden low-income communities with more truck traffic and pollution. And New Jersey Gov. Phil Murphy feels so strongly that he’s issued an escalating series of threats, even saying he could halt the operation through a key bi-state agency.

“It’s not going to happen,” Murphy has said of the plan. “If we have to, we’ve got options, which I don’t want to use, but we can use through the Port Authority.”

But congestion pricing works, and if New York wants to lead the way on this side of the Atlantic, it will need to deal with the pushback, according to an expert with London’s public transit authority, which implemented a similar program in 2003.

“You weren’t just trying to use the price mechanism. What you’re trying to do was change people’s travel behavior to make them more sustainable,” Christina Calderato, director of transport strategy and policy at Transport for London, said in an interview.

Hochul aims to raise money and reduce traffic by tolling drivers entering Manhattan below 60th Street. And a 2019 law clearing the way for the program requires it to generate $1 billion annually while exempting emergency vehicles, vehicles transporting people with disabilities and residents who live in the zone and make less than $60,000 annually.

Now authorities must balance how much to charge and who else to exempt — knowing that as the number of carveouts increases, so too must fees for those who are forced to pay. A six-member panel called the Traffic Mobility Review Board will ultimately propose the final arrangement, which the MTA board must vote to approve.

Transit leaders this week concluded six public hearings on the plan’s federally required environmental assessment, which weighs the impact of tolls ranging from $9 to $23 for passenger vehicles and between $12 and $82 for trucks. The Biden administration could decide by early next year whether to allow state officials to move forward.

Among the biggest sticking points in New York is how the state will handle taxi and for-hire vehicle drivers, who have been rallying outside the MTA’s headquarters this week to push for a blanket exemption.

Uber, Lyft and other app-based services have argued the new tolls are unfair because they already pay surcharges that generate revenue for the MTA. They also contend rising costs would unfairly burden passengers outside of Manhattan who have more limited transit options.

MTA Chair and CEO Janno Lieber has said he wants as few exemptions as possible, to ensure the plan works as intended. But he has voiced a willingness in recent days to work with the for-hire vehicle industry, particularly yellow cab drivers still reeling from a debt crisis where the secondary market for once-pricey taxi licenses imploded — and took many drivers’ life savings with it. Two scenarios presented in the environmental assessment exempted taxis, and others proposed capping how many times cabs and for-hire vehicles could be charged.

“As we work this through and look at the different options, we’re very attentive to not harming the for-hire vehicle business and the for-hire vehicle drivers,” Lieber said recently on public radio station WNYC. “It’s specifically identified as one of the issues that we have to mitigate, and we have to deal with as we select a strategy.”

London faced a similar issue when Uber and Lyft vehicles started popping up in city centers several years after it installed congestion pricing.

London saw traffic drop 15 percent afterward, but many of those gains were “eroded” by the growing number of for-hire vehicles, Calderato said. London now only exempts private for-hire vehicles if they’re wheelchair accessible, or one of the city’s famed black minicabs.

“What we were seeing though, was that where the congestion charge was successfully disincentivizing other people to stay away, [private for-hire vehicles] were uncharged and were then taking up that road space,” she said. “So essentially, you weren’t necessarily getting higher levels of traffic, but for all the other gains you were making, you were losing them again to the uncharged vehicles.”

Similar to New York, determining the rules for private vehicle operators was “a difficult consultation and decision” in London, according to Calderato. Operators ultimately bore the new cost, with Uber adding a £1 charge to every trip.

“There were different ways of doing it. But I think what we did see was that that market can adapt,” Calderato said.

The plan has garnered significant pushback from Hochul’s counterpart across the Hudson River.

And while her constituents may not reside in New Jersey, several of her top policy ideas rely on cooperation from Murphy, a fellow Democrat. For instance, Hochul and Murphy must still hammer out an agreement on how to pay for the proposed reconstruction and expansion of New York Penn Station.

But Murphy has only sharpened his rhetoric against the plan in recent days, arguing the state isn’t “equipped right now to see a bunch of people go out of their cars onto public transportation.”

He has faulted the plan as a “double taxation” on New Jersey drivers, who also have to pay tolls on the George Washington Bridge, Lincoln Tunnel and Holland tunnels to the Port Authority of New York and New Jersey.

He specifically faulted Gottheimer for “grabbing TV cameras” to complain about congestion pricing while allowing “2-mile-an-hour bus traffic” in his district. (A criticism that Gottheimer later called “the most ridiculous and defensive argument I’ve ever heard.”)

“We want to benefit the folks, the 90 percent of people who depend on mass transit, who are already using mass transit,” Lieber said on WNYC. “That’s where our priority lies, honestly.”

Others warn about the plan’s potential to divert traffic to other local roadways, creating more headaches for neighborhoods on the periphery of the congestion pricing zone.

This is particularly acute in the South Bronx, an area overburdened with polluting infrastructure. The MTA’s environmental assessment said the Cross Bronx Expressway could see hundreds more trucks daily, depending on what tolling scenario they choose. Rep. Ritchie Torres, a Democrat who represents the area and supports congestion pricing, has called on the agency to mitigate the potential impact.

While concerns over diverted traffic are common, transportation experts said they haven’t come to pass in cities that have moved forward with similar schemes.

“There is one interesting element, in that we tend to think that the traffic — the congestion — will reduce in the charging zones, but will increase in the grounds of that zone,” said Mohamed Mezghani, secretary general of the non-profit advocacy organization International Association of Public Transport. “There is no evidence of systematic increase in traffic around the charging zone or outside of the charging zone.”

Calderato echoed that point, adding that charges helped improve trip speeds for freight trucks that have little choice in their driving routes.

Still, Hochul will face political pressure to respond to concerns raised in the Bronx, particularly given the legacy of the Cross Bronx Expressway’s impact on the community.

Kevin Garcia, the transportation planner for the NYC Environmental Justice Alliance, has since named specific policies that could help reduce the plan’s impact on an area overburdened by polluting infrastructure. In testimony, Garcia called for the shutdown of peaker power plants and capping of the Cross Bronx Expressway.

“The MTA’s intent to address increased traffic and emissions in the Bronx is woefully inadequate,” Garcia said in Thursday’s testimony. “The MTA and the Hochul administration have obligations and ample opportunities to not just shoot for a ’net zero’ approach to increasing traffic and emissions in the Bronx, but rather to commit to a ’net positive’ approach, where the action leads to lower levels of emissions than would have otherwise occurred under the MTA’s proposal.”

In September, MTA officials will work on finalizing the environmental review, responding to the variety of criticisms raised throughout the public comment period. If the Federal Highway Administration approves it, congestion pricing could launch in New York by the end of 2023. The Biden administration could also ask for a full environmental impact statement, which would significantly draw out the timeline.

Those who have gone through the process before said it’s important to be flexible and respond to changes in traffic conditions.

London’s own plan continues to evolve. In 2025, transit officials will get rid of the congestion pricing exemption for battery-powered cars. Officials are also considering a fee for every car trip made, as part of a push by London Mayor Sadiq Khan to meet the city’s zero-carbon emissions by 2030 target.

“You’d still have your congestion pricing element. It would just be a part of a more sophisticated scheme” to factor in distance traveled, Calderato explained.

She added any plan must come with ample public transportation options to ease the transition.

“We put a really, really big investment into buses, and that was really key,” she said. “Because making sure that you’re providing people with those alternatives, and they can see that — that those buses were there from day one — was really important.”