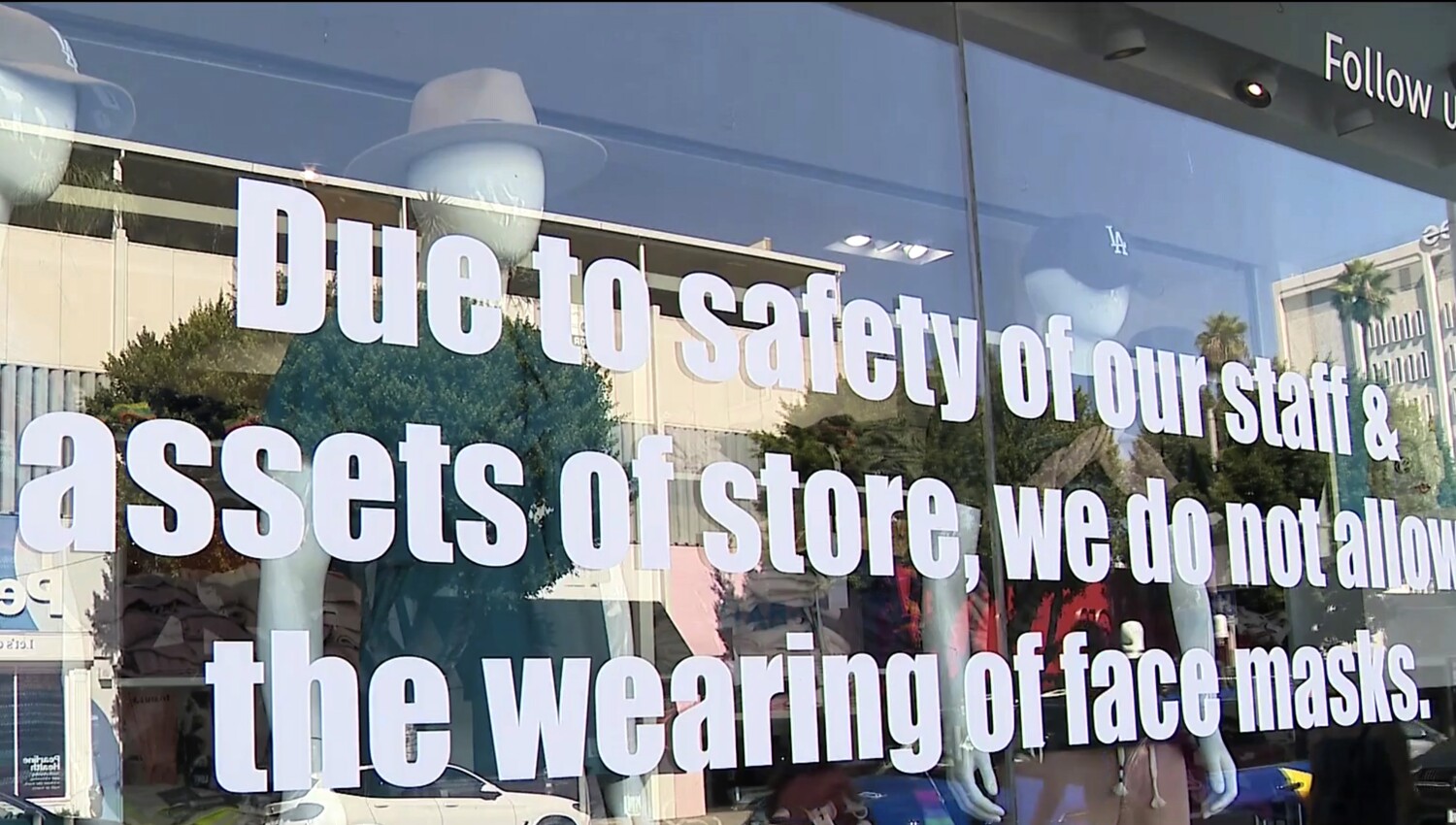 Fraser Ross, owner of the once-white-hot boutique chain Kitson, is not shy about two things: dropping the names of celebrities who have shopped at his stores and expressing his dislike for the restrictions politicians put in place during the COVID-19 pandemic.

During an interview Monday, Ross was interrupted while name-checking a Kardashian, Paris Hilton and Lindsay Lohan and taking a dig at California Gov. Gavin Newsom and L.A. Mayor Eric Garcetti for implementing pandemic “rules for thee, not for me.”

“There’s a customer coming in with a mask,” he said, “and I need to tell them they can’t come in with one.”

That’s the new reality at Kitson on Robertson Boulevard in Beverly Hills, where Ross has banned face masks out of concern for the “safety of our staff & assets of store,” according to a sign posted in a front window.

The 58-year-old owner, who admits that he uses political social media posts and store displays to stir controversy and publicity, said the mask ban is different.

The move, he insisted, was prompted by employees who are frustrated and fearful of thieves with covered faces targeting the store and others in the neighborhood. The ban applies only to the flagship Robertson location, one of five Kitson outlets, which Ross described as “the big store where all the valuables are.”

“The masks have nothing to do with politics; it’s to protect the assets,” Ross said. “I’m protecting my employees and our assets.”

That’s not to say Ross isn’t proud of the success he’s had with his divisive storefront displays, some of which have gone viral, bringing much-desired attention to his brand — though perhaps not as much as in the early aughts, when Kitson was a must-go for the shopping sprees of the famous, almost famous and hangers-on.

“I did the most famous Christmas windows,” Ross said, recalling a 2020 display of Dr. Anthony Fauci and House Speaker Nancy Pelosi (D-San Francisco), who came under fire for going to a hair salon during the pandemic lockdown. Wearing red Santa hats, Pelosi, Fauci, and others were labeled “Hypocrites of 2020” in posters. “The mainstream media didn’t want to talk about it, though, because I was outing Fauci,” he said.

Ross listed several recent thefts and robberies he said have occurred in his store and neighboring businesses, including one in which someone threatened an employee with scissors and two Japanese tourists had luggage stolen from their car.

The final straw, Ross said, came about two weeks ago, when two women wearing masks, whom he believes had been banned from Kitson for shoplifting, entered the store. When security guards confronted them, they yelled that they had COVID-19.

“I was sick of people coming into this store, and we can’t get them from a lineup,” he said. “They wear bucket hats, hoodies, and you can only see their eyes. You can’t say that’s the right person.”

“We’re living in Gotham City,” he went on, comparing the wealthy commercial district of Beverly Hills to the fictional crime-filled city that prompts Batman to become a vigilante. Crime, he said, “is at an all-time level.”

Statistics from the city’s police department present a decidedly less dire reality. In its June report, the Beverly Hills Police Department described crime this year as being “marginally up,” by 7%.

As of June, the city had reported 29 robberies, three more than in the same period of 2021. Seven robberies of stores, in which assailants used force or fear, have been reported since June.

When told about the city’s crime rate, Ross contended that many incidents go unreported.

“People don’t want to report it, because it scares people from coming into your store,” he said.

But as the Public Health Department considered its decision, some cities preempted the call and announced that they wouldn’t enforce a mandate if one were issued.

Pasadena and Long Beach announced on the same day that their health departments would not issue a mask mandate along with the county. Beverly Hills, which does not have its own health department, then announced that the city would not deploy resources to enforce a mandate.

Ultimately, the county did not issue a mandate, as infection rates began to drop.

Ross applauded the Beverly Hills decision, calling the mayor a “badass” in a post on the Kitson Facebook page.

Before its social medial pages and windows were filled with political statements, Kitson grew to fame in the early 2000s alongside several celebrities, who were photographed emerging from the store, carrying its blue bags.

“The celebrity culture, I may have started it in the 2000s,” Ross said.

“Don’t let the door hit you on the way out,” one post reads about Fauci’s decision to step down from government service at the end of the year. “Please take all your masks with you that you never wear.”

Others tread on the conspiratorial. The day after the FBI obtained a warrant and searched former President Trump’s Mar-a-Lago property, the store posted a message: “Who do you think the FBI collude with?”

Ross said the posts reflect his political leanings, although he maintains that he isn’t a Democrat or Republican and, as a Canadian, can’t vote.

His ban on face masks, though, is not an attempt to publicize the store or “troll,” he said. He also doesn’t think it will have much impact, since most customers aren’t wearing masks anymore anyway.

“There were a few people coming in with masks, but the rest are criminals,” he said.

The posts, he said help him raise the profile of his shop to compete with big retailers like Nordstrom.

“Maybe we’re the small company with the big voice,” he said. “I tell people all the time, if you’re Switzerland, people don’t really care. They like people to take a stance.”