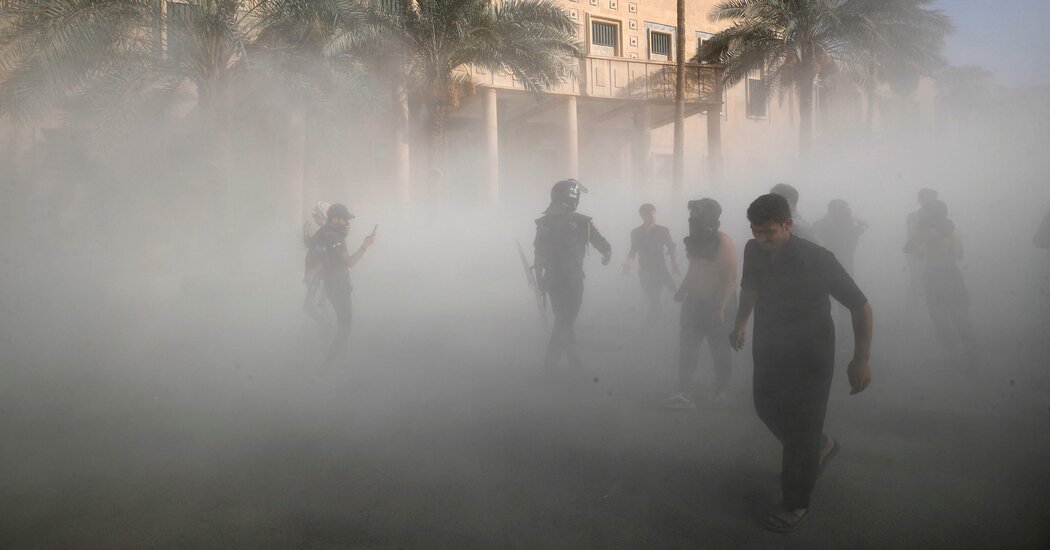 Iraq sank deeper into political chaos on Monday after the influential Shiite cleric Muqtada al-Sadr announced he was retiring from politics and at least 12 of his supporters were shot and killed by government security forces while protesting in the capital, Baghdad.

Mr. Sadr’s announcement on Twitter sent hundreds of his followers into the streets of Baghdad, where they breached concrete barriers guarding the so-called Green Zone, the site of Parliament, Iraqi government offices and diplomatic missions, including the U.S. Embassy.

At least 12 protesters were killed and more than 100 were injured when security forces fired on them, according to two Iraqi officials who asked not to be identified because of the sensitivity of the issue. Baghdad and most provinces were under curfew by Monday evening.

Although political turmoil and street protests are common in Iraq, Monday’s developments — with a combustible mix of inter-Shiite divisions and the breaching of state institutions, along with political deadlock — could mark an even more dangerous phase.

Iraq has been without a new government since elections last October, when candidates loyal to Mr. Sadr won the single biggest bloc of seats and eclipsed rival Shiite political parties backed by Iran. That has left the country with a caretaker government that has not been able to address urgent economic problems, such as passing an annual budget, among other priorities.

Mr. Sadr, whose militia fought U.S. troops during the American occupation of Iraq, comes from a family of revered clerics and is Iraq’s most influential Shiite religious figure involved in politics. In the midst of disagreements with other parties over who should be president and prime minister, he threw the process of forming a government into turmoil in June when he ordered newly elected members of Parliament loyal to him to resign.

Leaders in the Sadr movement, in a show of force in July, directed his followers to storm Parliament and then set up a tent camp that has blockaded the Parliament building for more than a month, preventing lawmakers from meeting.

Mr. Sadr has had an uneasy relationship with Iran, and if his vow to quit politics stands it could pave the way for his Iranian-backed rivals to form the nucleus of a new government. His ability to mobilize hundreds of thousands of followers throughout Shiite-majority Iraq means he could also engineer protests that would threaten any new government if he wishes.

On Monday, protesters for the first time during the recent unrest stormed the Republican Palace, Saddam Hussein’s former residence, which later served as the headquarters of the U.S.-led occupation and now hosts Iraqi cabinet meetings. Video posted on social media showed some of the protesters stripping off to their underwear and jumping in the palace pool.

“Today, the people are controlling the Green Zone,” says the narrator, who appears to be on a diving board.

Some international organizations were conducting evacuation flights from the Green Zone by helicopter to Baghdad’s international airport.

Security forces closed roads south of the capital, preventing more protesters from arriving from southern provinces that are Sadr strongholds. One of those provinces, Dhi Qar, announced all government offices would be closed Tuesday because of security concerns.

Iraqi security forces include members of Iran-backed paramilitaries not directly under the control of the government. Prime Minister Mustafa al-Kadhimi said the use of live fire by security forces was banned and he was launching an investigation into the shootings.

Neighboring Iran announced it was closing all land borders with Iraq until further notice and warned citizens not to travel to Iraq, saying the country was working to return Iranian visitors home safely. Tehran’s international airport suspended flights to Baghdad. Millions of Iranian pilgrims travel to Iraq every year to visit historic shrines at the heart of Shiite Muslim identity.

At least two of those killed were shot dead near the home of a former prime minister, Nouri al-Maliki, according to the senior security official.

Mr. Maliki is locked in a bitter rivalry with Mr. Sadr and the shootings near his home illustrated the dangers of the increasing factionalization of Iraqi Shiite parties. Mr. Maliki is part of an Iran-backed political bloc that has also vied to form a government. His sectarian policies while in power are widely blamed for having fostered the rise of the terrorist group Islamic State.

Mr. Sadr has mobilized much larger gatherings of followers in the streets in recent weeks to protest against government corruption and foreign interference in Iraq.

Mr. Sadr said in his statement he was also closing all institutions linked to the Sadrists except for the tomb of his father, Ayatollah Muhammad Sadiq al-Sadr, who was assassinated while Saddam Hussein was in power, and other offices related to the family’s religious heritage.

“I have decided not to interfere in political affairs so now I announce my final retirement,” Mr. Sadr wrote on Twitter.

Mr. al-Kadhimi, the prime minister, said he was suspending cabinet sessions until further notice. In an appeal to Mr. Sadr, he said perpetuating political disputes “to the point of damaging all state institutions does not serve the Iraqi people, their aspirations, their future and their territorial integrity.”

Mr. Sadr has said several times before that he was leaving politics and even temporarily suspended his political activities and closed his movement’s offices, prompting questions about whether this latest move could be a tactic to eventually strengthen his negotiating position in the now-paralyzed efforts to form a government.

“He repeatedly says he’s not going to be part of politics and then inevitably comes back in,” said Sajad Jiyad, an Iraq-based fellow at the Century Foundation, a U.S.-based think tank. “Maybe this is a way of giving breathing space to all sides.”

Mr. Sadr is known as an Iraqi nationalist. He had been trying to form a new government with Sunni Arab and Kurdish partners before those monthslong negotiations failed.

The resignation and the appearance of his followers in the streets could also be “a means to exert pressure and have people beg him to roll back his decision,” said Elie Abouaoun, a director at the United States Institute of Peace.