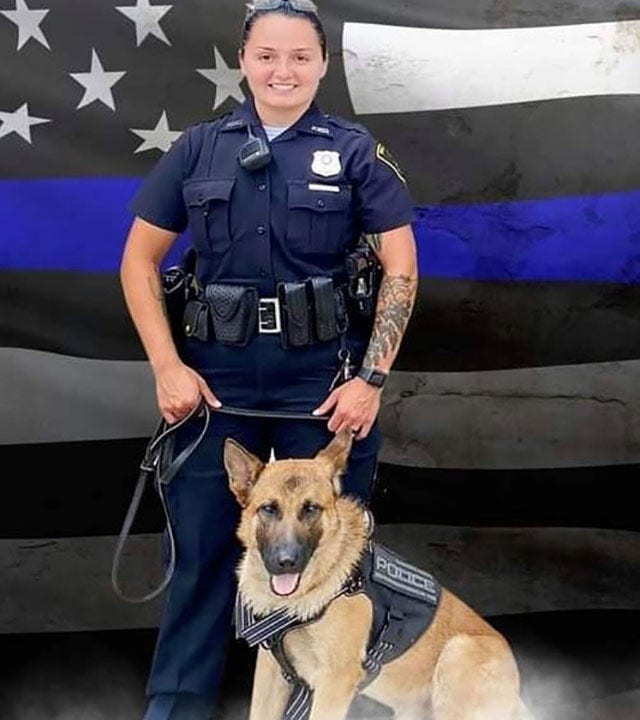 An Indiana police officer fighting for her life after she was shot during a traffic stop will be taken off life support Thursday, authorities said.

The Richmond Police Department said K-9 Officer Seara Burton, 28, will be taken off life support after doctors determined her injuries were “unrecoverable.”

Burton, a four-year veteran of the department, was shot Aug. 10 while responding to help other officers with a traffic stop. The stop involved a moped being driven by 47-year-old Phillip M. Lee.

Burton, pictured with her K-9 partner Brev, was in very critical condition after a suspect shot her during a traffic stop police said. She will be taken off life support Thursday, authorities said.
(Indiana State Police)

Burton’s K-9 partner Brev conducted an open-air sniff around a moped and indicated the possible presence of narcotics, police said.

While officers spoke with Lee, he allegedly pulled out a firearm and fired multiple shots at officers.

After Burton was struck, police said the other officers returned fire. Lee fled the scene on foot, leading officers on a brief foot chase before getting caught. He was treated for gunshot wounds and taken to a hospital.

Burton was airlifted to a hospital. At the time of the shooting, Burton had recently been elevated to the position of K-9 handler and was engaged to be married the next weekend.