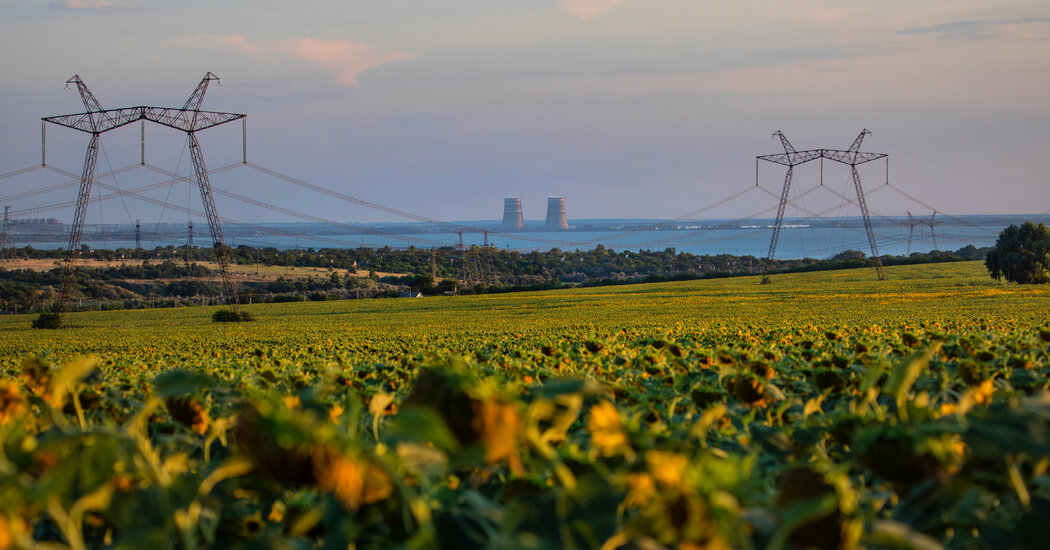 In the control room of Reactor No. 3, operators were horrified.

“Stop firing at the nuclear facility,” one begged over the station’s loudspeakers. “You are endangering the safety of the entire world.”

The danger at the Zaporizhzhia Nuclear Power Plant — a sprawl of cooling towers, nuclear reactors, machine rooms and radioactive waste storage sites — was actually graver than even those who worked there knew, in early March, just days after Russian forces invaded Ukraine.

A large caliber bullet had pierced an outer wall of Reactor No. 4 but, most worrying and not disclosed at the time, an artillery shell had struck an electrical transformer at Reactor No. 6, which was filled with flammable cooling oil, plant employees subsequently learned and told The New York Times. Both reactors were active.

Standing between the world and a nuclear calamity are the Ukrainian workers who know the plant intimately, having run it for years with the utmost precaution in a sleepy corner of southern Ukraine where the city and the plant had once lived in a steady and predictable symbiosis before the Russians arrived.

Today, under Russian occupation, the plant employees are both hostages and essential workers — Ukrainian engineers duty bound to prevent disaster while working under the watchful eye of Russian snipers.

The surrounding city where they live, Enerhodar, which translates as “the gift of energy,” is under siege. Some 100 plant workers have been detained by Russian forces, according to Ukrainian officials and residents. Ten of those are still missing.

It is up to a skeletal crew of stressed, tired and scared workers to prevent disaster.

“Imagine men and women coming to work and facing armed soldiers all around,” said Serhiy Shvets, a metalworker at the plant who was shot by Russian soldiers at his home in May. They had searched videos of people who protested in the first days of the war, and saw his face.

Mr. Shvets, 53, managed to get out of the city and to Ukrainian-controlled territory, where he spoke from his hospital bed. He fears for the plant, the city and the world with the Russian military now holed up in the nuclear station.

Our Coverage of the Russia-Ukraine War

“They are like a monkey with a grenade, not really understanding the threat they are posing,” he said.

Two months before the Russian invasion, Enerhodar celebrated an annual holiday unique to a community living in the shadow of Europe’s largest nuclear power plant: “The Day of the Energy Engineer.”

There were dinners, music, dancing and a fireworks display. “It was enchanting and cool,” said Olha, an engineer who attended the celebrations and fled the city in May, but relayed communications from those inside.

Like other employees of the plant interviewed for this article, Olha would speak only on the condition of anonymity out of fear for her safety.

In a city of 55,000, some 11,000 people worked at the plant. The city’s flag even features a blazing sun in tribute to the energy it provides.

Work on Zaporizhzhia began in 1984. When the sixth reactor came online in 1995, four years after the collapse of the Soviet Union and Ukraine’s independence, Ukrainians celebrated Zaporizhzhia as an accomplishment.

It became both a source of pride and a symbol of Ukrainian perseverance in the impoverished, early post-Soviet years and the aftermath of the 1986 Chernobyl nuclear disaster, which occurred when a safety test simulating the effects of a power failure ended in what many considered to be the world’s worst nuclear disaster.

After Chernobyl, and after Ukraine’s independence, the authorities issued a brief moratorium on nuclear construction, but it was not long before the country forged ahead with its nuclear ambitions. Today, Ukraine is second only to France in relying on its reactor network to meet its electricity needs.

A unique achievement, the Zaporizhzhia site has unique vulnerabilities, as well.

The massive plant was conceived in the Soviet industrial design philosophy known as Gigantism, giving birth to a panorama of industrial prowess, where much of what would seem to be the plant’s inner workings are exposed, rendering it especially vulnerable to the conflict now raging around it.

From the opposite shore of the Kakhovka reservoir, the cooling towers, smokestacks and containment vessels appeared through a haze on a recent summer afternoon, contrasting with the gentle valley of sunflower and wheat fields and rolling hills along the Dnipro River.

Zaporizhzhia has its own radioactive waste storage system, which was established in 1999 with Western backing as a way to end reliance on Russian reprocessing of spent fuel.

Nearly all those principles are now being violated, according to the International Atomic Energy Agency.

“The main condition for operating a nuclear plant is calm,” said Dmytro Gortenko, a human resources executive who worked in the plant’s administration building. “It should always be calm,” he continued. “Right up to having everything calm at home, in an employee’s home life. When a person is calm, he makes better decisions. In a state of tension or fear, a person makes mistakes.”

Mr. Gortenko has worked at the plant for 21 years, rising from being an engineer to overseeing the licensing for reactor operators. For him, like many others, work at the plant was a family affair. His father had been a guard, and his mother a librarian for technical documents, the same position his wife also held.

The city and the plant functioned in sync. There were regular safety drills at the plant and for those living and working nearby.

Mr. Gortenko and other employees rode the company buses to the work, passed a security checkpoint by swiping a card and changed into uniforms — white for scientists, gray for supervisors, blue or black for others. Workers ate at company cafeterias.

Each “block,” or reactor and machine room complex, required about 600 employees, he said. They worked in three eight-hour shifts that rotated from morning to evening to overnight, usually scheduled months in advance.

The culture was one of vigilance and attention to detail, he said. Even minor accidents were meticulously documented.

Like a sleeping giant, the plant and its perilous reactors were kept free of all disturbances.

But the plant’s occupation by armed Russian forces while fighting rages outside is not an emergency they had anticipated.

A Descent Into Chaos and Fear

Mr. Gortenko was there that March night when the Russians stormed the plant. When the shooting was over, he arrived to find half the windows in his building shattered from shrapnel and gunfire.

An icy wind blew through the offices.

Workers taped plastic over the broken panes and resumed their duties. Russian soldiers, he said, appeared from time to time. At first, he did not see them threatening workers, but they were armed.

By spring, however, the employees were entering the plant under the watchful eye of Russian snipers, according to messages shared with The Times.

“Russian snipers take positions on the roofs of the station’s buildings,” was the message sent to Olha, the engineer. “The employees are literally working at gunpoint.”

When they arrived, the Russian soldiers tore down the town’s flag — along with a Ukrainian flag flying above City Hall — and put in its place the Russian tricolor and the hammer and sickle of the former Soviet Union, according to residents.

Residents say the Russians have been seen drinking, looting and detaining anyone for expressing even a whiff of protest. Across the close-knit company town, people shut themselves at home as stories of friends gone missing multiplied.

“There was a case where a person was taken into the forest and they shot near him” in a mock execution, Mr. Gortenko said of a detainee’s ordeal he had heard about through relatives. “They had lists of people.”

“I personally know one man who went missing in March, and there is no information about him,” said Olha, the engineer. “Another man was taken to the commandant’s office for interrogation and beaten to death.”

After the young man was killed, she said, the Russians called his mother and told her to come collect his body.

The repression has grown alongside partisan resistance to the Russian occupation in town, adding to the swirl of violence. On May 22, Andrii Shevchyk, whom the Russians had installed as mayor, was injured in a bombing outside his apartment.

The next day, Russian soldiers showed up at the front door of Mr. Shvets, the metalworker, and shot him. Mr. Shvets said he had no connection to any organized insurgency but he did staff the barricades, along with hundreds of other plant workers, as Russians approached the city.

Harried, fearful for their families, employees at the nuclear plant nonetheless turned up for work in the reactor control rooms, pumping stations and turbine compartments.

As the Russians tightened their grip on the plant and the city, officials at Energoatom, the Ukrainian company that oversees the nation’s 15 nuclear reactors, made a decision to allow some nonessential staff to leave.

In April, the company also decided to distribute its entire stockpile of potassium iodide, a drug that can protect people from radiation-induced thyroid cancer.

The Ukrainian authorities are also revising evacuation plans for about 400,000 people living in Ukrainian-controlled territory that would most likely be in the radiation fallout zone in the event of a meltdown.

Combat has returned to the plant again, with artillery shells striking the station grounds. Explosions are heard frequently, employees say.

On Monday, Ukrainian officials said that there had been shelling again near the plant and that a man had been killed and several others injured when Russian soldiers opened fire on their car at close range.

The violence has set off a desperate exodus of those living there, and on whom the peaceful functioning of the plant depends.

“Many of those who are still working would like to leave, as well,” Olha said.