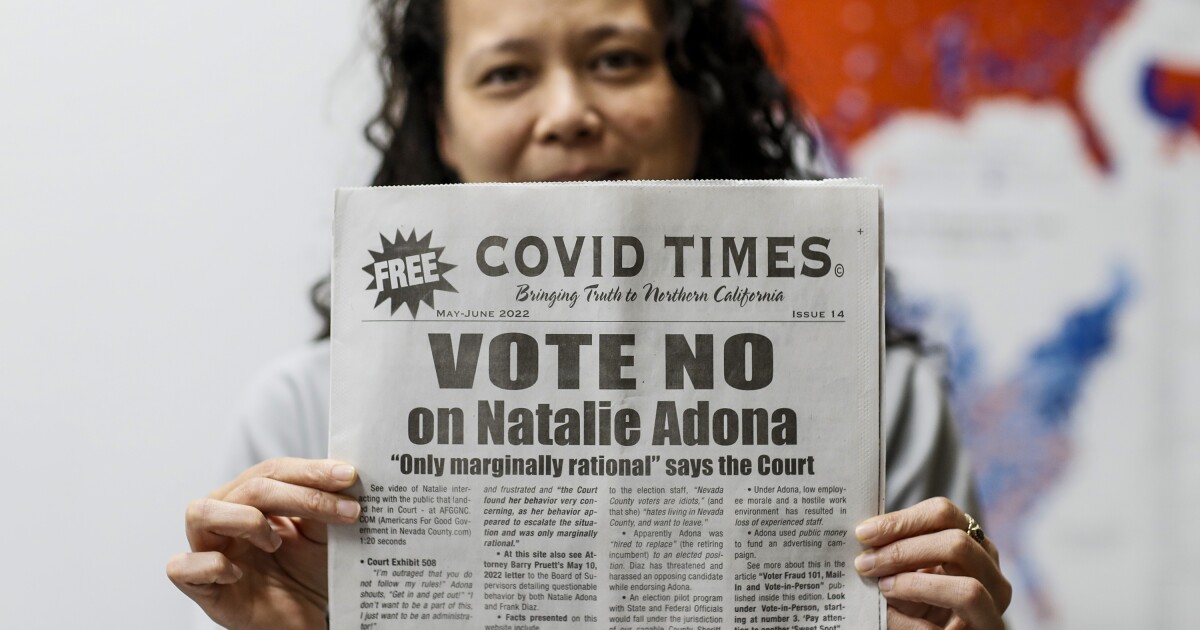 She was an Asian American candidate in a predominantly white rural county who was called “a carpetbagger” in election mailers from her detractors.

She was harassed by 2020 election deniers. And she had to get a restraining order after anti-maskers forced their way into her workplace.

And on election night, Natalie Adona won her race for Nevada County clerk-recorder and registrar of voters in a landslide. She had won 70% of the vote as of Thursday.

“It’s a relief because I felt like I was put through the ringer,” Adona said.

Like a growing number of small, local races, the unusually vicious election in this Sierra Nevada county was beset by all the ills of today’s American politics: conspiracy theories, election denial, bitter partisanship and rage over COVID-19 pandemic policies.

Since former President Trump lost the 2020 election and claimed, falsely, that it was stolen from him, local election offices have become the front lines for the rabid distrust in the voting process that he fomented. Election workers across the country have faced such a constant barrage of harassment and threats that they are quitting in droves across the country.

Adona said that in her new role as head of local elections, she will have to work hard to fight the kind of misinformation and suspicion that fueled the vitriol she faced. She is currently the assistant county clerk-recorder and will replace her boss, Gregory Diaz, who is retiring.

Gilbert told The Times that he doubted the results of the 2020 presidential election because Trump had bigger campaign rallies than President Biden, and that he believed election officials should be allowed to crack open and inspect voting machines because they could have cellphone modems hidden inside that collect information for nefarious actors.

Gilbert had 8% of the vote, as of Thursday.

Jason Tedder, a Navy veteran endorsed by the local GOP, got 22% of the vote. He did not respond to requests for comment.

He too publicly questioned the integrity of local elections processes.

On his website, Tedder said that if elected, he would have required two workers and a sheriff’s deputy to be present every time ballots were collected at drop-off locations. Ballots, he said, would be placed in the deputy’s vehicle to be taken to the elections office, and they would be “tracked in real time using the GPS already installed on the patrol car,” which was to be followed by poll workers.

Despite complaints about “election integrity” and a lack of transparency from Adona’s opponents, Tuesday night was quiet at the elections office. Adona said she saw one citizen observer that evening.

A Times reporter checked the YouTube livestream of four cameras in the county elections office numerous times during election night and was the only person watching.

“I’m grateful people saw the urgency and turned out to vote,” Hall said. “It speaks to this community as a solid, rational, educated county.

“We have a small, angry group of extremists. … The majority isn’t interested in these extreme ideas or politics.”

Last week, a recall effort against all five Nevada County supervisors for alleged “crimes against humanity” and enforcing pandemic restrictions fizzled out when supporters missed their deadline to submit signatures to force a special election.

In January, when a statewide indoor mask mandate was in effect, a group of recall supporters showed up to the county elections office, where Adona was working, to check on the status of their petition.

They refused to wear masks, and one woman pushed a county employee as she and two others forced their way into the locked office. A judge later issued a restraining order against her.

One of the most vocal proponents of the recall effort, Calvin Clark, ended up running for a seat on the board of supervisors against an incumbent, Susan Hoek.

Hall said that despite two years of harassment and threats during the pandemic, she was not too concerned about the recall effort led by Clark.