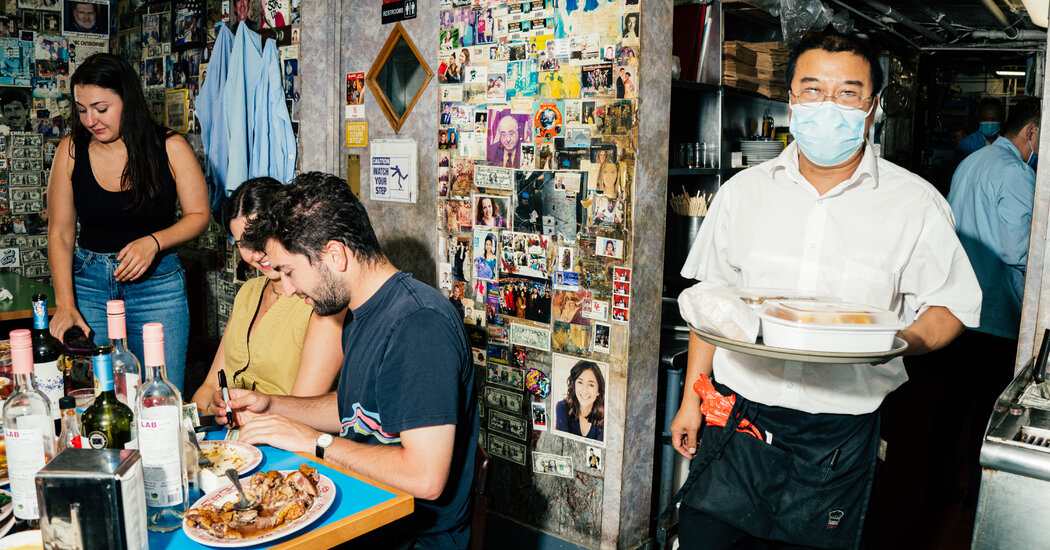 If you see “Moulin Rouge” on Broadway on a Thursday at 8 p.m. and get out of the theater after 10:30, definitely do not take the train down to Wo Hop expecting to get some 11 p.m. lo mein. The subway is back to running all night, but the Chinatown institution that was once open 24 hours now closes at 10 p.m.

L’Express, a French-ish bistro on Park Avenue South, has a sign outside that reads “Ouvert 24 Hrs.,” but these days it closes at 2 a.m. on Friday and Saturday and 11 p.m. the rest of the week.

Cafeteria in Chelsea, the sleekly designed comfort food space formerly open all day and night, now calls it quits at 1 a.m. Whitestone Lanes, a bowling alley in Queens, used to be 24 hours but now shuts its doors at 1 or 2 a.m. And there’s a 24 Hour Fitness in Kew Gardens that closes at 10 p.m.

As New York recovers from the global pandemic, one may wonder whether its reputation as a 24-hour town is in jeopardy.

The reasons for the early closings vary: Some businesses grew weary of the drunken clientele in the wee hours. Some worried about the safety of their staff commuting home. Some scaled back during the pandemic and have not yet resumed round-the-clock hours. And many restaurants still report difficulty in finding enough help, even amid signs of improvement.

While the rest of the country has regained all of the jobs it lost during the pandemic, New York City is bouncing back more slowly. Many hotel and restaurant jobs have disappeared because fewer people are visiting the city or dining out, and the jobs that remain are often the hardest to fill, offering late-night shifts and relatively low pay.

In 1978, when Frank Sinatra — who was known to be a late-night fixture at spots like P.J. Clarke’s and Jilly’s — sang “New York, New York,” he wanted to “wake up in the city that never sleeps.” The nickname stuck. But now, New Yorkers accustomed to a city whose machinery churns until dawn are finding themselves disoriented by adjusted closing hours. Want a bite after last call at the bar? Sure, your bodega may be open. But you may not be able to sit down at your old standby.

A recent night out found startled customers all over the city grappling with scaled-back accommodations at formerly up-all-night institutions — as well as ample evidence that the very-late-night nibbles in New York have morphed and moved but not entirely disappeared.

“Wo Hop is closed? How is that possible?” asked Damon Crittendon, after being turned away on Saturday night.

He and his wife had attended a party, and he had hoped to brag to his kids about getting late-night roast duck afterward, just like he used to. He now lives 60 miles away in Goshen, but recalled his younger days when he regularly headed to Wo Hop after hanging out in clubs. “I was looking for something nostalgic,” he said.

“We have mostly older staff,” said David Leung, who is a part owner and whose family has been involved with the restaurant for generations. He said that some of the staff decided to retire after not working during the pandemic.

“We also don’t want them coming in late at night anymore,” Mr. Leung said. “Not that many of them actually live in Chinatown. So they’d be going home to Brooklyn and Queens by mass transit.” With the recent anti-Asian attacks, he said, “We were worried for their safety.”

At Veselka, the Ukrainian restaurant beloved by East Village locals and N.Y.U. students, Shep Wahnon had just finished a blintz and a matzo ball soup.

He had been a regular at Veselka since 1981, he said. “Now they have a thing, ‘The kitchen’s closing.’ That’s a new thing.” The neon sign in the window, reading “open 24 hours,” was not illuminated.

One obstacle, he said, was that the pandemic disrupted Broadway and Off Broadway theaters — and the reliable supply of would-be actors and crew members who moved to New York, ready to work in restaurants while awaiting a big break. Now, he noted, “You can be in Kansas and audition via Zoom.”

James A. Parrott, director of economic and fiscal policy at the Center for New York City Affairs at the New School, notes that labor force participation in New York City has rebounded substantially. “To me that suggests that there’s not really a shortage of people looking for work,” he said. “There may be a disconnect between job openings and job seekers.”

Regardless, regulars tell Mr. Birchard that they miss the old Veselka. They miss coming in late at night for pierogi. But he just doesn’t think he’ll go back to being open 24 hours anytime soon.

For some business owners, staying open too late attracts some undesirable customers.

Space Billiards, located 12 stories up above the buzzy heart of K-Town on West 32nd Street, has been open since 2007 but ceased operating 24 hours day, seven days a week, before the pandemic — in 2017.

“The problem is,” said Harvey Shim, the marketing director, “most people coming in after 1 a.m. are usually not the most, um, polite, or in a great state of mind.”

Even if you give up 24-hour service, however, it is still possible to stay open quite late. Space Billiards now closes when it stops serving liquor, at 4 a.m. And it’s generally busy right up until the last possible minute.

After midnight, in the early hours of Sunday morning, all the pool tables were booked, and there was a one-hour wait to play. As Beyoncé’s voice emanated from speakers, the bar area was packed, with unhurried customers sipping beer and cocktails.

“They don’t want the FOMO,” Mr. Shim said — the fear of missing out. “So they come to K-Town because it’s not just our business, but a lot of businesses stay open past 3 a.m.”

After 2 a.m. on Sunday, six people in various shiny pleather ensembles were squeezed into the narrow front vestibule at the Donut Pub on West 14th Street, ordering red velvet, salted caramel and maple bacon doughnuts. The classic Old New York staple remains open around the clock — as it has since December 1964.

Buzzy Geduld, the founder, believes that other formerly 24-hour joints may eventually extend their hours too. As employees return to offices, businesses will adjust to accommodate them, he said.

“You’re going to see more people back in the city and more people hanging out late at night before they go home,” he said. “I think it was a temporary thing — just one man’s opinion.”

Even now, the Donut Pub’s sugary, light French crullers are not the only option in New York in the wee hours.

Coppelia, a couple of doors down from the Donut Pub, serves “Cuban soul” food — empanadas, chicken with rice — 24 hours a day.

Daisey’s Diner in Park Slope, Neptune Diner in Astoria, Kellogg’s Diner in Williamsburg and Court Square Diner in Long Island City are all still 24 hours. And many of the 99¢ Fresh Pizza locations throughout the city are open until 5 a.m.

“This is the calm before the storm,” a manager at Katz’s Delicatessen said, even as the line at the counter was four people deep. Plates of pickles and half-eaten pastrami sandwiches littered the tables. They were expecting more customers to arrive when the bars closed, at 4 a.m.

For some all-night-long establishments, the height of the pandemic was just a short-term interruption.

Katz’s, a Lower East Side stalwart since 1888, began staying open 24 hours on Friday and Saturday nights around 2009 or 2010, said Jake Dell, the third-generation owner, and recently returned to those hours after focusing on shipping during the period of the pandemic when indoor dining was not allowed.

Mr. Dell said that the deli is back to having people queuing up for pastrami and knishes every day. “It’s hard to put your finger on,” he said, “but it really feels like New York is, you know, sort of done with its PTSD in a lot of ways.”

To some extent, the after-hours food scene has migrated from its former pockets in Manhattan to the corners of Brooklyn.

At the intersection of Jefferson and Wyckoff in Bushwick just after 4 a.m., a gentleman named Tito was speaking into a microphone over some electronic beats being broadcast via a speaker sitting on the sidewalk. “Vibrate higher, vibrate higher,” he said encouragingly.

Two people danced as the Mi Amor Halal & Mexican Fast Food truck behind them steadily served up chicken over rice and falafel tacos.

Tia Butler, wearing heels and a miniskirt, emerged from a car with a group of friends. She had attended a fashion show, then gone to a couple of clubs, and was ready to get something to eat. “We’re just kind of vibing out here,” she said.

As the time crept past 4:30 a.m., Femmie, a runway model in a fishnet crop top, plaid miniskirt and furry boots, got on line for tacos on Troutman Street. “New York is the city that never sleeps,” she said, emphasizing her point with an expletive.

“I mean, look at us. Out like a black alley cat,” she said, with an expertly executed purr. “Ready to attack.”