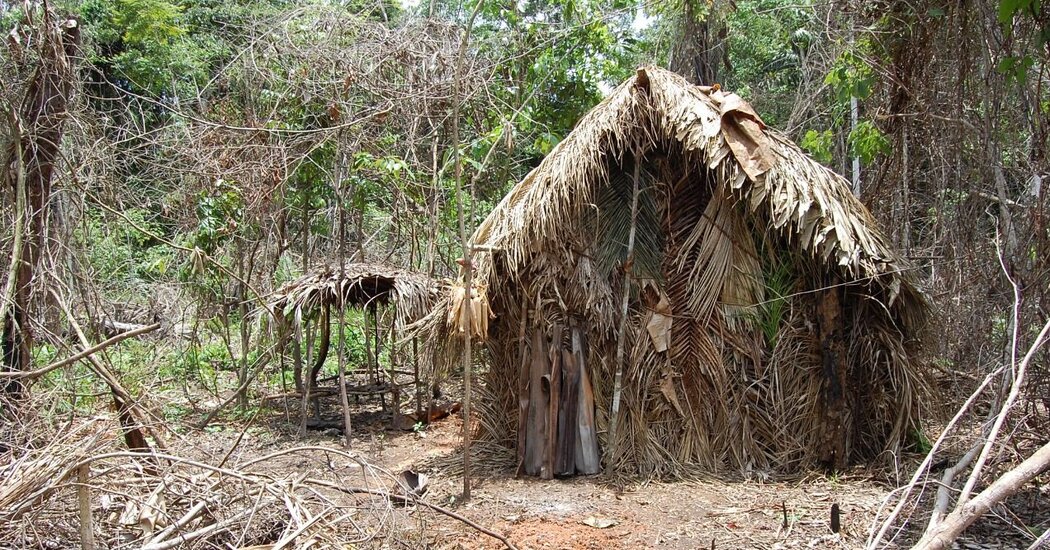 RIO DE JANEIRO — When officials from Brazil’s Indigenous protection agency approached the hut in the middle of the Amazon rainforest, their fears were confirmed: They were witnessing the first recorded disappearance of an uncontacted tribe in the country’s history.

The man lying in the hammock, the last member of his tribe, had died, and with him an entire culture and answers to a thousand questions.

Even his name was a mystery. He was known only as “the Man of the Hole” because of the dozens of holes he had dug over the years in his territory. His age, too, could only be guessed at. He appeared to be about 60, officials said.

It was a sad milestone for a country that in recent years has seen protections for Indigenous groups weakened and undermined by an administration that has prioritized development of the Amazon over conservation.

Officials from Brazil’s Indigenous protection agency, Funai, found the man’s body on Aug. 23 during a patrol in the Tanaru Indigenous Territory, in the state of Rondônia, bordering Bolivia.

The death was most likely the result of natural causes, Funai said in a statement released on Saturday. The agency brought in criminal experts to examine the site and then sent the man’s body to the capital, Brasília, for an autopsy.

A Funai official who was not authorized to speak on the record said the agency would also run DNA tests and then return the body to the forest to be buried.

The man’s body was covered in feathers, according to Marcelo dos Santos, an Indigenous expert, who saw a photo of the remains.

“Was he waiting for his death?” Mr. Santos said. “Who knows. There was never communication, not even with another ethnic group, to know more about him. So we can’t be sure of the reason.”

Uncontacted tribes are groups that live without sustained contact with the outside world.

While this is the first recorded disappearance of an uncontacted tribe, experts say others have most likely gone extinct without ever being documented.

Funai has reported evidence of at least 114 isolated groups in Brazil, but the existence of only 28 has been confirmed. As a result, the remaining 86 tribes do not benefit from any government protections. The agency is responsible for monitoring Indigenous activity and protecting the inhabited lands from development. However, Brazil’s president, Jair Bolsonaro, has championed industries driving the destruction of the Amazon, which has led to record levels of deforestation.

The Brazilian leader has both loosened regulations to expand logging, ranching and mining in the Amazon and scaled back protections for Indigenous groups and conservation lands. He has also slashed federal funds and staffing, weakening the agencies that enforce Indigenous and environmental laws.

“Many of these ethnic groups become extinct without even the state or society being aware of their extinction, which is very serious,” said Guilherme Martins, an Indigenous expert at Funai.

With the enforcement of protection policies, some Indigenous peoples manage to avoid extinction, though others are doomed. The Piripkura tribe, for example, is composed of only three members: an infertile woman and two men living isolated in their Indigenous territory of Mato Grosso State.

Some officials have warned that the agency has not been proactive enough in confirming the discovery of new isolated tribes by field agents, which would then allow the lands where they live to be granted protections.

In Rondônia, the only inhabitant of the 8,000-hectare area lived in complete isolation for at least 26 years after the rest of his group was killed by ranchers advancing the agricultural frontier.

Mr. Santos collected accounts from local residents who confirmed there were at least two attacks against the Indigenous group, one in which they received poisoned sugar (with no clear date), and another in the early 1990s, when the few remaining members, roughly six people, were nearly all gunned down.

“What happened to his people was a genocide,” Mr. Santos said. “It shows we are failing as a society.”

There are some accounts of contact between the man’s tribe and farmers who took over the land from the 1970s, but Funai made direct contact with the last surviving man only in 1996.

Mr. Santos, who led the Funai expedition that met the man, said he was found hiding in his hut.

“We traveled the region to find his house where he was taking refuge,” Mr. Santos said. “We tried to establish a conversation and offered corn and arrows, but he was terrified and very aggressive. From this moment on, we had to respect his isolation.”

One year later, Funai restricted access to the territory to prevent the incursion of loggers and ranchers. The protection decree remains active until 2025.

The Indigenous man would flee upon recognizing the presence of any agent patrolling the area and was known by Funai agents and the Brazilian news media as the Man of the Hole because he dug dozens of 10-foot holes in the land.

“The adornments and utensils he used were similar to those of Indigenous groups of the whole region,” Mr. Santos said. “The only thing that sets him apart is the existence of these holes.”

Some of the holes dug outside the huts contained sharp spearheads, which officials believe were meant for hunting; others inside the huts had scratches.

“This was perhaps an indication that they had a mystical meaning,” Mr. Santos said.

Even with protections in place, the territory suffered widespread deforestation up until about 13 years ago. Attacks on the last surviving man continued, as well, including one by armed gunmen in 2009, according to local news reports.

“As you are driving to the Tanaru territory where the man lived, what struck me was how completely denuded of trees it was, with massive cattle ranching areas,” said Fiona Watson, a research director at Survival International, a London-based rights organization.

Ms. Watson accompanied Funai agents on an expedition in 2005 to confirm that the man was still alive and to monitor the area for signs of illegal activity.

“For me, he was this symbol of resistance and resilience: to be able to survive on his own, not speak to anybody and avoid all contact maybe out of grief or determination,” Ms. Watson said.