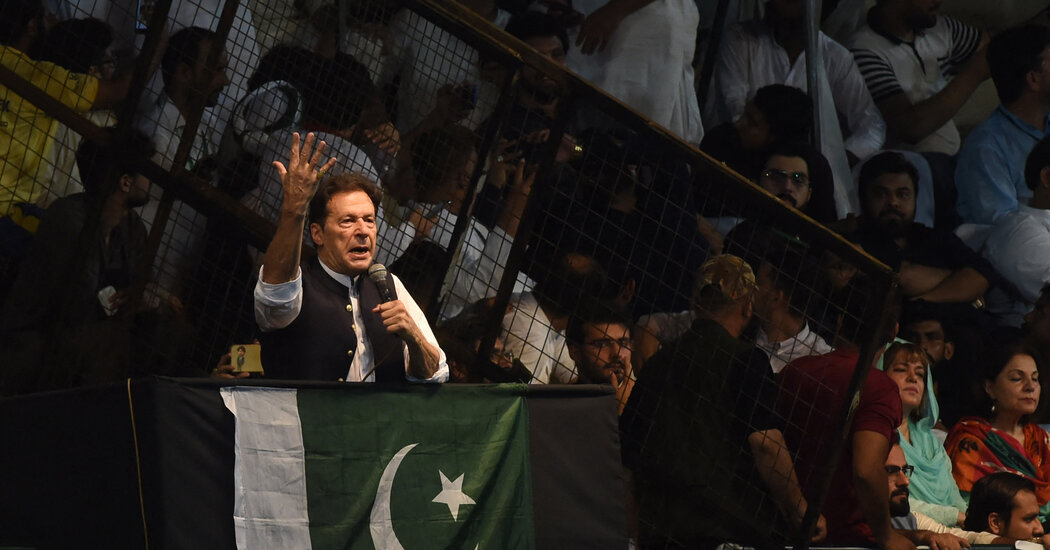 Pakistan faces a political flash point after the police filed terrorism charges this weekend against Imran Khan, the former prime minister who has staged an improbable comeback after his ouster earlier this year.

The conditions that precipitated Mr. Khan’s fall — rising prices of food, the country’s heavy debt and the loss of the military’s support — have only worsened under the current government. In July, residents of Punjab, Pakistan’s most populous state, showed their displeasure by handing Mr. Khan’s party, Tehreek-e-Insaf, a sweeping victory in local elections.

Buoyed by that success, Mr. Khan has renewed his call to hold general elections earlier than planned. But the government, Mr. Khan and his allies say, has responded with a crackdown on him and his party in a bid to prevent him from returning to power. Mr. Khan on Sunday blamed Pakistan’s powerful military, which once backed him.

Authorities have yet to arrest Mr. Khan. He was granted a form of bail on Monday, which is allowed in Pakistan before an arrest is made.

Here’s what you need to know about the situation in Pakistan:

In a speech on Saturday, the former prime minister threatened to sue police officers and a judge involved in the case of a senior aide, Shahbaz Gill, who Mr. Khan said was tortured while in police custody. Officials have denied those claims.

After Mr. Khan’s speech, a complaint was filed with the police, accusing him of trying to intimidate the country’s judiciary and police force, local news media reported. A case was registered against Mr. Khan under Pakistan’s terrorism law, but it is not clear whether there is an arrest warrant or what the exact charges are.

Mr. Khan has not yet responded publicly to the charges.Leaders of his party have vowed to take to the streets if he is arrested.

Mr. Khan’s aide, Mr. Gill, was detained after he called for military officers to defy orders from the top brass. The popular cable television channel on which Mr. Gill made those comments, ARY News, was forced off the air. Over the weekend, Pakistan’s media regulator ordered television channels to stop carrying Mr. Khan’s speeches live, saying he was “spreading hate speech.”

Mr. Khan had an atypical rise to political leader.

Born to an affluent family in Lahore and educated at Oxford University, Mr. Khan rose to international prominence in the late 1970s on the cricket pitch. By the time he led Pakistan in 1992 to its only World Cup triumph, he had become a regular in London’s fashionable crowd. In 1995, he married a British heiress, Jemima Goldsmith.

A year later, Mr. Khan tried to parlay his cricket popularity into a political career, establishing his own party, Pakistan Tehreek-e-Insaf, or the Movement for Justice. As a politician, he painted a picture of himself as a reformer offering an alternative to the entrenched political dynasties.

For over a decade, Mr. Khan struggled to make political inroads and was mocked for his political ambitions. But by 2011, he began drawing hundreds of thousands of Pakistanis to his rallies. Many were energized by a populist message against corruption and American influence.

By then, he had embraced a pious form of Islam and sought to transform his personal image.

After winning the backing of military leaders, Mr. Khan was elected Pakistan’s prime minister in 2018. Many of his rivals accused the military of manipulating the election in his favor — an accusation Mr. Khan and the military have denied. He ushered in a new foreign policy, moving away from the United States and closer to Russia and China.

Mr. Khan’s tenure as prime minister had a premature end.

The global wave of inflation that followed the coronavirus pandemic dealt a severe blow to Pakistan, a country of 220 million people that was already struggling with erratic growth and heavy government debt. The rising cost of food and imports like fuel led to dissatisfaction with Mr. Khan’s handling of the economy.

A dispute with military leaders compounded Mr. Khan’s struggles, and by late last year, his tenure began to unwind. He had sought to place a loyal aide and former spy chief in charge of the army over the objections of the military leadership.

With Mr. Khan appearing to lose the military’s backing, his political rivals became emboldened. They pushed for a vote of no confidence to oust him after he rejected calls to resign. Mr. Khan remained defiant and dismissed the plan for the vote as part of an American conspiracy, without providing any evidence. In a bid to sidestep the vote, he dissolved Parliament and called for new elections.

Mr. Khan’s scorched-earth politics had left him with few friends and little negotiating room. Most of the major opposition leaders had been jailed during his tenure.

Mr. Khan’s opponents said his call to dissolve Parliament amounted to a coup and petitioned the Supreme Court, which overturned his move to dissolve Parliament. In April, Mr. Khan became the first prime minister of Pakistan to be removed in a no-confidence vote. His ouster extended a dubious distinction for the country: Not one of its prime ministers has completed a full term in office.

Even though Mr. Khan was removed from office, he continued to have a significant following in Pakistan. He staged political rallies in which he accused the United States, the military and Shehbaz Sharif, the opposition leader who succeeded him as next prime minister, of conspiring to topple his government. American officials, the military and Mr. Sharif have denied those accusations.

This summer, Mr. Khan proved that he remained a powerful force in Pakistani politics. In July, his party won a sweeping victory in elections in Punjab, a bellwether for national politics. The economic issues that helped lead to Mr. Khan’s fall have also become a problem for the new government.

Mr. Sharif has raised electricity and fuel prices as he tries to get the economy back on track. He has also ended some government subsidies to revive a $6 billion bailout plan from the International Monetary Fund that was suspended after Mr. Khan’s administration failed to meet some conditions of the loan.

Buoyed by the victory in Punjab, Mr. Khan renewed his call for the government to hold general elections earlier than 2023, the scheduled date.

Mr. Khan added to his momentum this month when his party also fared well in elections in Karachi, Pakistan’s economic hub.