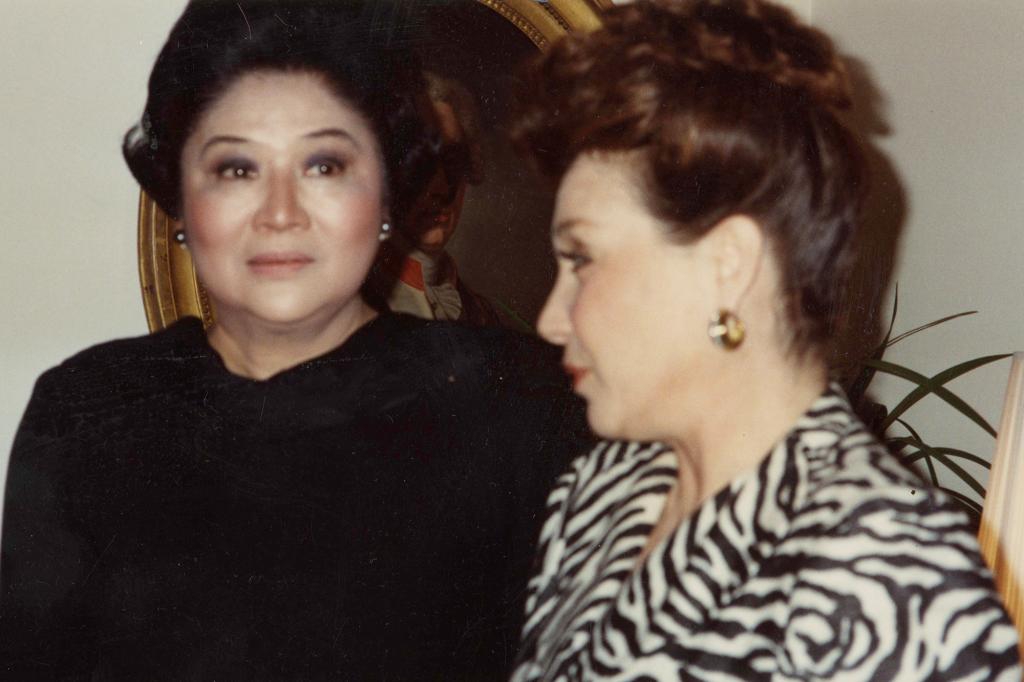 Back before whatshisname invented lightbulbs, she and I met. The Shah of Iran had invited friends to celebrate His Majesty’s 2,000-year-old city Persepolis. Guests like Princess Grace, Haile Selassie, Spiro Agnew, Imelda. This week — Imelda in Manila, me in New York — traded phone calls. Years come, tragedies go, but friendship of half a century goes on.

When Kayser-Roth Corporation owned Miss Universe I, assistant to the president brought celebrity judges and in 1974 arranged to televise it worldwide from Manila. First time outside the USA. Estimated audience 500,000. Imelda built us a special theater. Came fearful hurricane warnings. Our crew numbered hundreds. Calmly, the first lady sent up her air force to “seed the clouds.” What that meant, who knew. What it did, I know. Black clouds moved off the island of Luzon. The day cleared. The show televised. Next day that hurricane socked us for three days. I was there, I know.

The country is 12 hours ahead. On one trip there then-President Marcos held a gala in my honor. Gowns, jewels, music, magic, photographers, TV, flashbulbs. The major photo? Me fast asleep on the president’s shoulder. Hey, it’s a long flight.

So, yes, for sure I know the mom of the new president of the Philippines.

On the phone we remembered her New York trial. Life then was her East Side townhouse and Gen. Douglas MacArthur’s Waldorf suite where, one day, her friend Doris Duke, USA’s richest female, brought two lawyers plus Imelda’s needed millions for bail. Nobody was to know. Me already there, I got locked into a john where I could hear it all.

June 30 her “only son” becomes president. She says: “Of age when his father was alive, he always wanted to be a politician. School was in England. He spent 20 years studying there. And then ran in our province. Became governor, senator and — with my wishes and prayers — president. I will stand there wearing my best Filipino dress. I still keep my old clothes but my daughter is making a special gown.

“I know what difficulty is. I remember those days when I faced jail and was all by myself. Fighting alone. Returning to Manila there were cases against me. I thought I’d never come back. The government was against me. I faced it all alone with people praying to help me. I was in such a sad state.”

We relived her standing to face a NY judge. We remembered her collapsing and being rushed to a hospital. We recalled a priest conducting Mass in her living room. We reviewed her walking St. Patrick’s Cathedral aisle on her knees.

“Now I live alone. Large apartment. Many care for me. My children live nearby. July 2 I’ll be 93.”

Lives change on both sides of the globe. Off to address a graduation, Sen. Chuck Schumer got word daughter Jessica was in labor. He and wife Iris raced to the hospital, overnighted, and come morning welcomed their first granddaughter.

The other flash announcement is that gramps Schumer did NOT get that news on his ancient relic flip phone.

Babies haven’t any hair; oldie heads are just as bare. Between the cradle and the grave; lies a hairdo, even a shave.