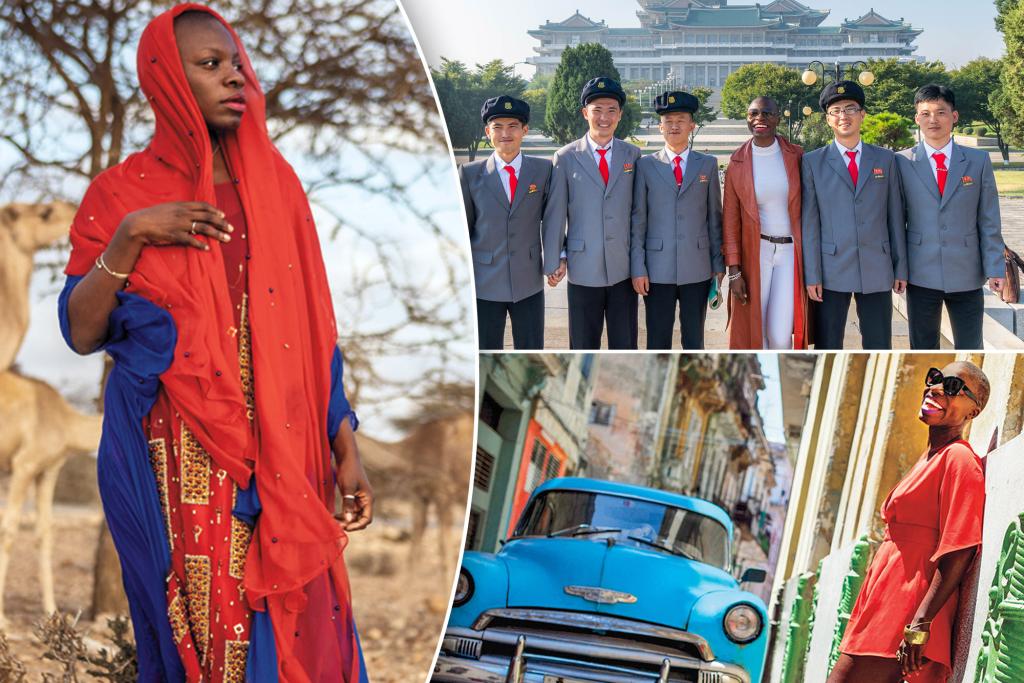 Instead of throwing herself a milestone birthday party, Jessica Nabongo planned to visit every country in the world by the time she turned 35.

When she landed in the Seychelles Islands on Oct. 6, 2019, Nabongo, now 38, became the first black woman and one of fewer than 250 people to travel to all 195 countries: 193 United Nations recognized states plus two nonmember states, the Holy See and Palestinian territories.

Using her dual citizenship as a Ugandan American, the Detroit native was able to explore nations most Americans will never see, including Turkmenistan, Cuba and North Korea. She’s compiled her photos and stories into a new book, “The Catch Me If You Can: One Woman’s Journey to Every Country in the World,” with National Geographic.

“It was the kindness of strangers that made my journey so beautiful,” Nabongo told The Post.

In October 2018, Nabongo, who works remotely for a luxury travel agency and as a consultant for the UN, entered North Korea using her Ugandan passport. (The American government prohibits its citizens from visiting the country.) She was shocked by what she saw.

“I thought of North Korea as a place where the sun did not shine, the sky was never blue, and everyone wore gray,” she wrote of the one-party state in “The Catch Me If You Can.”

But Nabongo told The Post that she was pleasantly surprised by how “normal it felt.”

Nabongo spent five days on a “very prescriptive government tour” exploring the capital city of Pyongyang with a private tour group she found on Google.

“I followed children on field trips. I saw couples in parks and grocery stores [which were small but stocked with food] and people riding their bikes or taking the subway to work,” she said.

One night the group headed to a bar filled with music and people — mostly men — enjoying a beer after work. She said wasn’t really able to chat with many North Koreans due to the language barrier and their “reserved” and “quiet” nature, but she got the feeling that they were fascinated at meeting an American.

Nabongo admitted that people often ask her about North Korea’s labor camps and prisons, which she did not see, but noted that she’s also never been to the projects or a prison in the United States either.

“There’s terrible things that are happening everywhere in the world,” she said.

However, she noted how insular the country is. “Once in the city, you could tell that the country is not very exposed to the rest of the world. Nowhere do you see advertisements, brightly colored clothing or jeans, or Western brands in the supermarket,” she wrote. North Korea, along with Cuba and Turkmenistan, were among the only countries with virtually no Wi-Fi.

However, she did write that the city was filled with skyscrapers, large apartment buildings, government buildings and public squares “just like you see in other capital cities.”

Nabongo writes in her book that Pyongyang “felt like a time capsule,” a common description for many communist countries, and distinctly remembers the green-and-red subway cars, a relic from the 1970s.

Despite the “retro” feel of the city, it did receive an upgrade in 2012 when leader Kim Jung Un announced the skyline was too gray and ordered the buildings to be painted in “surprisingly bright” pinks, greens and yellows.

As a seasoned traveler since the age of 4 — when she got her first passport stamp traveling to Canada with her parents — Nabongo said that people should try to keep an open mind while globe-trotting, managing their expectations.

For instance, she said she was “underwhelmed” when she arrived at Machu Picchu because she had seen a million pictures: “You’re like, ‘Oh, OK, that’s exactly as I thought it would look.’”

Nabongo recommends striking up conversations with locals to see what they suggest seeing, doing and eating.

“The people who are in the country know more about the country than Google ever will,” she said.