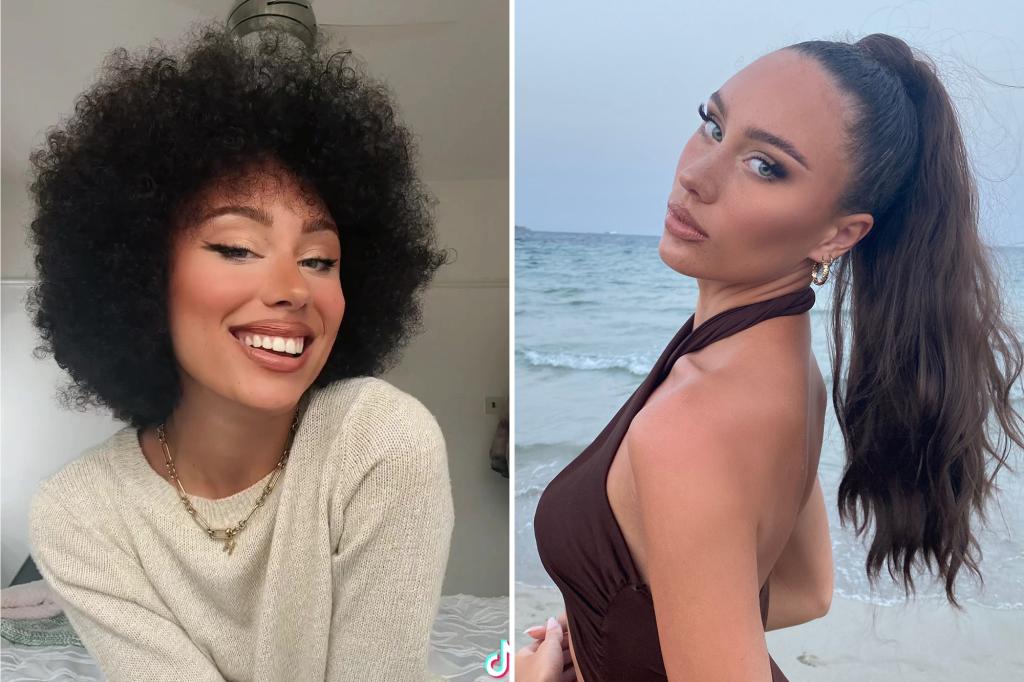 A mixed-race woman is setting the record straight after online trolls claimed she’s “too white” to have an afro.

Hannah Beau from Stockport, Greater Manchester, has used social media to document her journey of growing and accepting her curls.

But not everyone has come to terms with the light-skinned beauty’s natural twists.

The 22-year-old influencer has spoken out about how she was bullied and felt pressure to straighten her naturally curly hair for most of her life.

Beau’s grandparents on her dad’s side were both from Ireland, while her grandad on her mom’s side was from Saint Kitts in the Caribbean and her maternal grandmother is of French, Scottish and English descent.

As one of only two mixed-race girls in her school, she said that her unique combination of pale skin and hair texture left her with an “identity crisis,” as she felt she didn’t “fit in” with either the black or white teens.

“It was expected for the darker skin girls to have curly hair and the white girls all had straight hair — and I was a weird mix of the two that didn’t really fit in either,” she told South West News Service. “It was like an identity crisis really, thinking: ‘What am I? Am I white? Am I black? What does mixed mean? Can I wear my curly hair if I’ve got whiter skin?’

“It was just constantly questioning who I am and what I can and can’t do — and I think it’s really sad that it’s taken me 22 years to figure that out.”

After nearly a decade of using harsh chemicals, extreme heat and damaging bleach to transform her kinky curls into a cascade of straight, blonde hair, Beau decided to grow out her natural locks and embrace her unaltered looks.

“Once I noticed my curls were gone, I realized I didn’t want them to be gone — they’re a part of me and my identity and I want to embrace them,” she said.

Although Beau has finally come to embrace her mixed-race and natural locks, she still receives a lot of hate and unsolicited opinions about her look.

Documenting her hair journey on TikTok, the influencer said her comments are frequently dominated by debates about her race, with many insisting she is white and appropriating black culture because of her light skin tone.

“Pretty much every video gets negative comments … I notice it more in the videos where my hair is super curly — people make assumptions about me and my race,” she explained.

“A lot of the comments were just people debating about my race and saying, ‘She’s not black’ or ‘She’s not white’ and debating it, as if it’s their business to debate,” she said.

“If you’re calling me white, you’re completely ignoring the black side of my family and everything they went through,” she continued. “It hurts because it’s such a big part of my identity and who I am, just because of the color of my skin.”

The public debates and opinions about her identity have always bothered Beau, but the comments questioning her identity hit an especially sore spot as of late.

“It gets to me the most when people say ‘she’s not black’ because my grandad who was fully black passed away recently and if you’re saying I’m white it’s like he didn’t exist or contribute anything towards me being here,” she explained to SWNS.

“It doesn’t sit right with me; it makes me feel really uncomfortable,” Beau said, though she thinks that the comments come from a lack of comprehension.

Beau believes that “because no one looks the same,” there is a lot of “misunderstanding” about what mixed-race people look like.

“The black people that question me, I think it comes from a place of wanting to protect their culture and stop it from being appropriated because it is so often,” she said. “When it comes from white people, I’m not sure — it could just be racism, but I don’t know.,”

After years of insecurity, the now-confident, mixed-race beauty is using her social media to encourage others like her to embrace their natural and ambiguous looks.

“I grew up in a time when social media wasn’t as big, so the only people you could look at were the people around you — and no one looked like me,” she explained. “That’s why I do what I do on my TikToks now: to be the person I wish I had growing up to look up to.

“The amount of girls that comment saying, ‘I have white skin and your hair type as well and I don’t know anyone else that looks like me’ — it’s nice to know that you’re not alone and there is a place where you fit in.”

Beau’s videos showing off her luscious locks have gone viral with millions of views. One, which used the Lizzo song “About Damn Time” as Beau embraced showing off her natural curls, even attracted the attention of the singer herself.