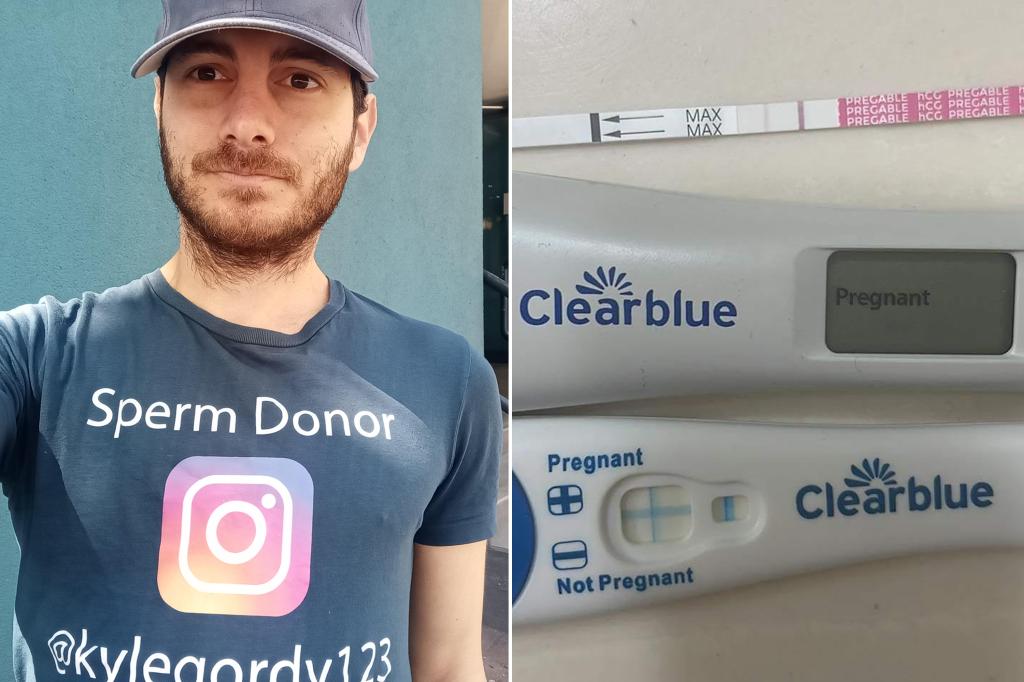 His love life has been “sperminated.”

A prolific father who can’t find a partner might seem like a paradox. However, a California sperm donor with almost 50 biological children fears that his controversial vocation may have torpedoed his chances of landing a paramour.

“Most women aren’t interested in dating me,” Kyle Gordy, 30, told Jam Press of his devotion to donation.

The freelance baby purveyor, who claimed that an estimated 1,000 women have requested his semen, first started donating his swimmers when he was 22 as he felt traditional sperm banks were “cold and clinical” — and wanted to know where his sperm was actually going.

So, like a mom and pop producer in a sea of corporate sperm merchants, the entrepreneur began promoting his free service on Instagram (@kylegordy123), and soon scores of aspiring mothers came a-knocking, Jam Press reported.

“As soon as two years [after donating] I got more attention, as that’s when I was actively donating more,” Gordy explained. “I had a few successful pregnancies, so I started receiving messages on my Instagram from women, which I was really surprised about.”

Fast forward until now, and the independent sperm banker has fathered 47 children in multiple countries with 10 more on the way.

But despite the fact that scores of women desire his super sperm, the serial surrogate said that he’s had trouble finding that special someone.

“Although I’ve had a few women interested in a possible relationship, it never goes anywhere,” lamented Gordy, who reportedly had an “average” dating life even before his career. “I have accepted my decision to donate sperm, but I’ve realized that dating may never be the same as it once was for me.”

Nonetheless, the heartsick sperminator said that if a “special lady comes along,” he’d be “happy to indulge” something more.

“It is possible I could settle down and start a family of my own, but it would take a very special someone to accept me for who I am,” Gordy explained. “I think discussing my sperm donating early on in our relationship is best, as she will more likely understand the situation.”

While he might be striking out romantically, the motherhood facilitator said he feels “great having helped so many women start families.

“The joy I receive from doing this is the best feeling in the world,” said Gordy, who openly meets his children, regardless of whether they’re actually “his” to care for.

“I regularly receive pictures of the children, so knowing they are doing well is great,” he added.

And, apparently, the feeling is mutual.

“I didn’t think so many women would be interested, as most of them had money and could easily go to any sperm bank,” said Gordy. “However, after hearing their reasons, most stated that they wanted the option for the child to see their biological father.”

Not just a US-based donor, Gordy is currently on a “sperm donation world tour” — with recent stops in Scotland and Germany, per his Instagram — and has at least three kids in the UK. And, in a first for across the pond, the charitable soul recently donated sperm to one woman “naturally,” he said.

“At first she said she was nervous but after talking for a bit, she told me how happy she was,” explained the donor of cutting out the middleman. “We realized we had a lot in common, which I find is always great, and we even discussed staying in contact.”

Gordy added that he believed “women in the United Kingdom are most interested in me, but I think this is only due to sperm banks being off-putting.”

What’s the secret to cultivating world-class swimmers? Gordy chalked it up to going organic by using 18 different herbs and supplements a day, as well as abstaining from caffeine, alcohol, cigarettes and drugs.

With an army of offspring at 30, Gordy is perhaps on track to eclipse the UK’s Clive Jones, 66, who claims to be the “world’s most prolific sperm donor” with more than 129 biological children.

“If arrangements are made outside of the clinic environment, there can be medical and legal risks; for example, without the proper consents in place, the donor is likely to be seen as the legal parent, with all the rights and responsibilities that involves,” said a spokesperson for the Human Fertilization and Embryology Authority. “Clinics will also rigorously test all donors for medical and hereditary illnesses.

“That’s why we always encourage sperm donors and patients to go to a licensed clinic, where these medical and legal issues are taken care of for them, and where the welfare of the child is always of primary concern,” they concluded.