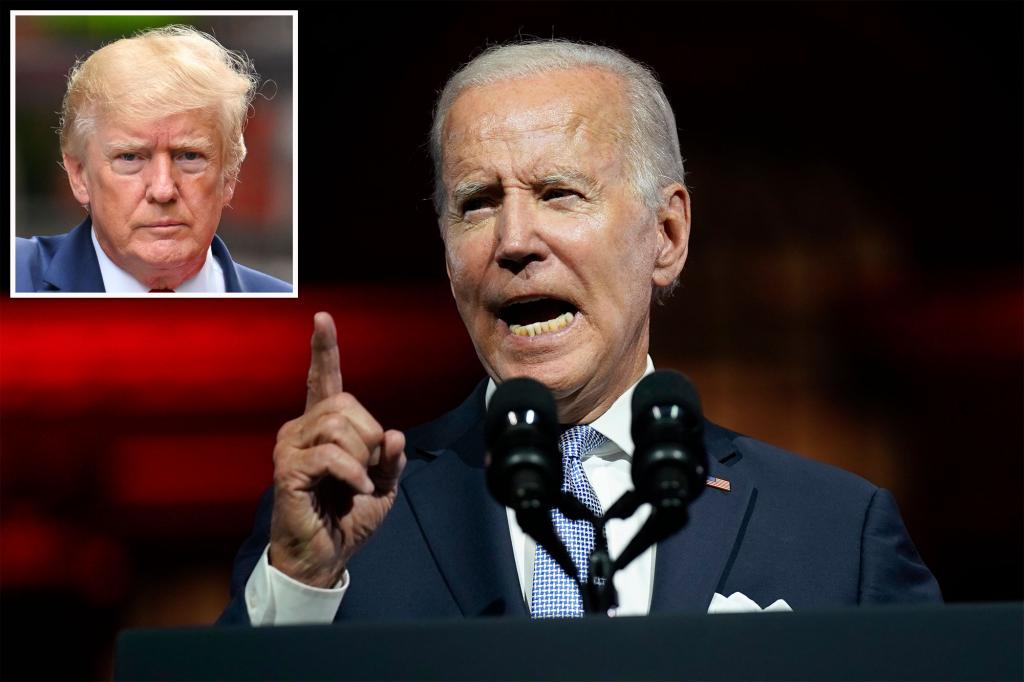 Joe Biden has become America’s leading troll — and he’s trolling Donald Trump. The president’s supposedly grand speech in “defense of democracy” under attack by “Trump and the MAGA Republicans” was hardly a visionary call to renew our commitment to the Republic.

If it had been the highfalutin speech we were promised, Biden wouldn’t have spent ludicrous time praising himself for things like prescription-drug costs and burn-pit health coverage. No, this speech was nakedly, even comically, designed not to elevate but to offend — to poke and taunt and push his predecessor and his predecessor’s camp followers and acolytes into firing back about how evil Biden is.

Biden wants Trump angry, and loud, and silencing every other voice but his own. It’s not an accident that Biden’s rise and the Democratic enthusiasm surge has come in tandem with Trump once again at the top of the American news agenda over the past six weeks. Biden knows he won in 2020 by successfully making the election a referendum on Trump. Nothing would make him happier than having the 2022 election continue in that vein.

For that to happen, he needs Trump and his Trumpies to be seduced into yelling and screaming and tweeting and arguing that the 2020 election needs to be re-run and that people who stormed the Capitol need to be apologized to and whatever other damn-fool argle-bargle comes out of their mouths and fingers.

That ludicrous blather excites them in unseemly ways even as it scares other Republicans — those who just want to have a normal midterm in which the party in power is made to answer for the condition of a country in which seven-in-ten people say we’re on the wrong track — into silence and toadiness.

It also reminds the independents who voted for Trump in 2016 and then ran the hell away from him in 2018 and 2020 why they ran.

The latest Wall Street Journal poll shows that independents, who favored Republicans by 12 points in March when Trump was out of the news, now prefer Democrats by 3 points. That’s a 15-point swing. Some of it is likely due to discomfort with the Supreme Court overturning Roe v. Wade. But most of it is due to the fact that TRUMP TRUMP TRUMP TRUMPIE TRUMP.

It also inflames Democrats who might otherwise find voting in the midterms a depressing prospect at a time of near double-digit inflation, a worsening border crisis, and rising crime. Biden needs Democrats fired up.

And nothing fires them up like getting a chance to slam Trump. If the president can make Democrats think a vote in November 2022 is a vote against Trump he can eliminate the enthusiasm gap between the parties (which almost always favors the one out of power), reverse political gravity, and win a most unexpected triumph.

Trump has said forever that his greatest political lesson came from Roy Cohn — never allow an attack to go unanswered. That’s exactly what Biden is counting on.

And that’s the real reason he stood in front of Independence Hall and pretended to be the great defender of democracy he has no right to claim to be. This is the hypocrite who said in January 2022 that he “easily” believed the 2022 election “could be illegitimate.”

This is the hypocrite who, in June 2021, described legislation that had passed and been signed into law in the state of Georgia through a proper constitutional process — the very constitutional means of self-government he praised to the skies at the beginning of his speech — as “Jim Crow 2.0.”

This is the hypocrite who has never denied Stacey Abrams’s preposterous claim that she was the rightful winner of the Georgia governorship in 2018.

So spare us your preposterous pieties, Joe Biden. Still, you do earn cynical snaps when it comes to the sheer audacity of your transparent trolling.