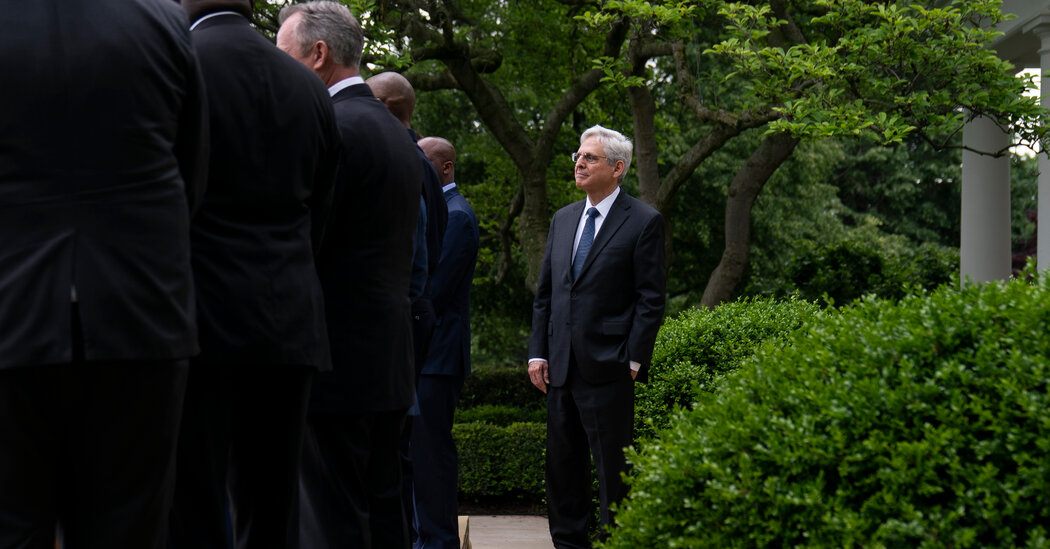 WASHINGTON — For the past year and a half, the Justice Department has approached former President Donald J. Trump’s effort to overturn the 2020 election results with a follow-the-evidence strategy that to critics appeared to border on paralysis — and that limited discussions of his role, even inside the department.

The electrifying public testimony delivered last month to the House Jan. 6 panel by Ms. Hutchinson, a former White House aide who was witness to many key moments, jolted top Justice Department officials into discussing the topic of Mr. Trump more directly, at times in the presence of Attorney General Merrick B. Garland and Deputy Attorney General Lisa O. Monaco.

In conversations at the department the day after Ms. Hutchinson’s appearance, some of which included Ms. Monaco, officials talked about the pressure that the testimony created to scrutinize Mr. Trump’s potential criminal culpability and whether he intended to break the law.

Ms. Hutchinson’s disclosures seemed to have opened a path to broaching the most sensitive topic of all: Mr. Trump’s own actions ahead of the attack.

Department officials have said Ms. Hutchinson’s testimony did not alter their investigative strategy to methodically work their way from lower-level actors up to higher rungs of power. “The only pressure I feel, and the only pressure that our line prosecutors feel, is to do the right thing,” Mr. Garland said this spring.

But some of her explosive assertions — that Mr. Trump knew some of his supporters at a rally on Jan. 6, 2021, were armed, that he desperately wanted to join them as they marched to the Capitol and that the White House’s top lawyer feared Mr. Trump’s conduct could lead to criminal charges — were largely new to them and grabbed their attention.

Overt discussion of Mr. Trump and his behavior had been rare, except as a motive for the actions of others, a subtle but significant change that was underway even before Ms. Hutchinson’s testimony.

A small team of prosecutors in the U.S. attorney’s office in Washington has ramped up its investigation into a scheme to install fake state electors, spearheaded by lawyers who were in frequent contact with Mr. Trump. And the Justice Department’s watchdog is investigating efforts undertaken by Jeffrey Clark, a former department official who discussed the plan with Mr. Trump, to undo the results of the election.

A flurry of recent subpoenas related to the electors inquiry and raids related to the inspector general’s investigation into Mr. Clark — which were done with the knowledge of the department’s senior leaders — suggest that those investigations are accelerating. At the very least, those moves indicate that prosecutors are inching closer to the former president.

The Justice Department does not publicly discuss details about continuing investigations or where they may lead, so as not to prejudice criminal proceedings or to imply that people are guilty before they are charged with any crime.

The policy, longstanding but more vigorously enforced recently, has infuriated critics, including President Biden, who accuse Mr. Garland of being too slow and cautious. The congressional committee looking into the attack, which resumes its public hearings this week, has used testimony, especially Ms. Hutchinson’s, to prod the department to move more aggressively.

Representative Liz Cheney, Republican of Wyoming and the committee’s vice chairwoman, has pressed her colleagues to make a criminal referral to the department in hopes of forcing Mr. Garland’s hand.

On Monday, Andrew Weissmann, a senior prosecutor in the special counsel’s investigation into Russian interference in the 2016 election, sharply criticized Mr. Garland’s “bottom up” investigative approach in a guest essay in The New York Times, saying the department should instead work from Mr. Trump’s speech to supporters on the Ellipse outward.

But Mr. Garland’s message has always been clear: The Justice Department investigates crimes, not people.

His answer: “As long as it takes and whatever it takes for justice to be done — consistent with the facts and the law.”

Mr. Garland’s stoicism belies the fact that Mr. Trump, still a dominant force in Republican politics, casts a long shadow over the department’s investigation a year and half after his supporters rampaged the Capitol.

Investigators initially focused on the rioters who had attacked police officers, stormed the building and menaced the news media. But as evidence that members of far-right extremist groups had engaged in a seditious conspiracy mounted, a tense internal debate erupted over how to widen the sphere of possible defendants.

Some prosecutors wanted to compile lists of their fellow members and see what they might know, according to two people familiar with the plan. Top F.B.I. and Justice Department officials shot it down. It is unconstitutional to investigate a person solely based on their association with a group, and doing so runs afoul of department policy, which says a person’s actions can be examined only if evidence links them to a crime, they argued.

On the day he took office, March 11, 2021, Mr. Garland sat through a detailed briefing on the status of the investigation delivered by Michael R. Sherwin, the head of the U.S. attorney’s office in Washington who was overseeing the inquiry. Mr. Sherwin presented Mr. Garland with a strategy that included four teams of prosecutors, labeled A through D: “Team B,” already staffed by 15 lawyers, had begun looking into “public influencers and officials” linked to the attack, according to a copy of a memo shared with The New York Times.

Mr. Garland listened intently and thanked Mr. Sherwin for his hard work under difficult circumstances, according to people familiar with the exchange.

Mr. Sherwin, who had been appointed by Mr. Trump, then appeared on “60 Minutes” and suggested the inquiry should target the highest levels of government — naming names. “Maybe the president is culpable for those actions,” he said, infuriating the department’s new leadership.

Within six weeks, he had returned home to Miami, and Mr. Garland’s team took over.

Mr. Garland’s appointees have struggled with many of the same thorny questions about the scope of the investigation as their predecessors did. They were uncertain they could show that the nonviolent activity to thwart the peaceful transfer of power violated criminal law, according to people familiar with the inquiry.

Those concerns seem to have faded, with prosecutors pursuing the investigation into the alternative elector plan, and Mr. Clark’s actions.

While there has never been a prohibition, formal or otherwise, against discussing Mr. Trump, top department officials then and now made clear that prosecutors should be focused on the evidentiary road in front of them, not to a road map leading to Mr. Trump.

Until recently, that entailed tightly steering discussion to the details of specific cases being developed — rioters, midlevel ringleaders or Trump associates involved in the state electors scheme, according to current and former officials — not to speculative ones.

If career prosecutors uncover evidence linking Mr. Trump to the crimes that they are investigating, new procedural hurdles make it more complicated for them to look into his actions. In 2016, rank-and-file F.B.I. agents did not need approval to investigate actions by Hillary Clinton and Mr. Trump. But Attorney General William P. Barr issued a memo that requires the attorney general, via the deputy attorney general, to approve such a move, which could place additional pressure on Ms. Monaco.

Even without that clearance, Ms. Monaco runs the department’s day-to-day operations and oversees all prosecutions, including the Jan. 6 inquiry. The team that reports to her has repeatedly pressed the House committee for transcripts of hundreds of interviews it has conducted, arguing that the panel’s reluctance to do so before the hearings conclude was hampering the department’s work.

Ms. Monaco, whose work as a prosecutor in the government’s Enron case in the early 2000s earned her rising-star status, sips her coffee from a mug that reads “Boring Is My Brand.” She has often expressed admiration for her first boss in government — Janet Reno, Bill Clinton’s attorney general — who resisted pressure from the White House and members of her own party by assigning a special counsel to investigate the Whitewater scandal.

She keeps close tabs on the investigation, mostly through her staff aides, who communicate with investigators. Major developments — like the Hutchinson revelations — are discussed at higher-level meetings, according to people with knowledge of the process.

Ms. Monaco does not micromanage staffing decisions, but she is consulted on significant moves, including the hiring last fall of a little-known federal prosecutor from Maryland, Thomas P. Windom, to pull together some of the disparate strands of the elector scheme.

If Ms. Monaco has been steadfast in not discussing even seemingly basic details of the investigation — such as Mr. Windom’s hiring — she has been more candid about the challenges of conducting an investigation that is “among the most wide-ranging and most complex that this department has ever undertaken.”

That problem has grown more acute as the inquiry has advanced from low-level prosecutions of rioters to the more complicated task of unraveling the plot by Mr. Trump’s associates to undermine an election. The department has asked to double its Jan. 6 legal work force.

After Mr. Garland was confirmed in March 2021, he embraced a staffing plan initiated by the department’s caretaker leadership, assigning about 120 prosecutors to the case. They were split between lawyers from the department’s headquarters, including members of the criminal and national security divisions, and investigators working out of the U.S. attorney’s office in Washington.

In the succeeding months, about 20 more lawyers, in addition to support workers, were added to keep pace with the task of prosecuting about 800 people who were directly involved in the Jan. 6 attack on the Capitol.

Turnover and attrition have been a challenge. Many of the lawyers assigned to those prosecutions were department veterans temporarily detailed to the District of Columbia attorney’s office from other cities. Some supervisors back home, dealing with a sharp postpandemic surge in violent crime, have aggressively pushed for their return.

In March, the department requested $34.1 million to bring on an additional 131 lawyers for the investigation. It was ignored — infuriating senior department officials, who have privately noted the contradiction between congressional calls to speed the inquiry and the denial of resources the department needs to hire more prosecutors.

Ms. Monaco has personally pushed for the funding herself, while emphasizing her intention to make do with whatever is at hand.

“Regardless of whatever resources we see or get, let’s be very, very clear — we are going to hold those perpetrators accountable, no matter where the facts lead us,” Ms. Monaco said in March.

“No matter what level,” she added.