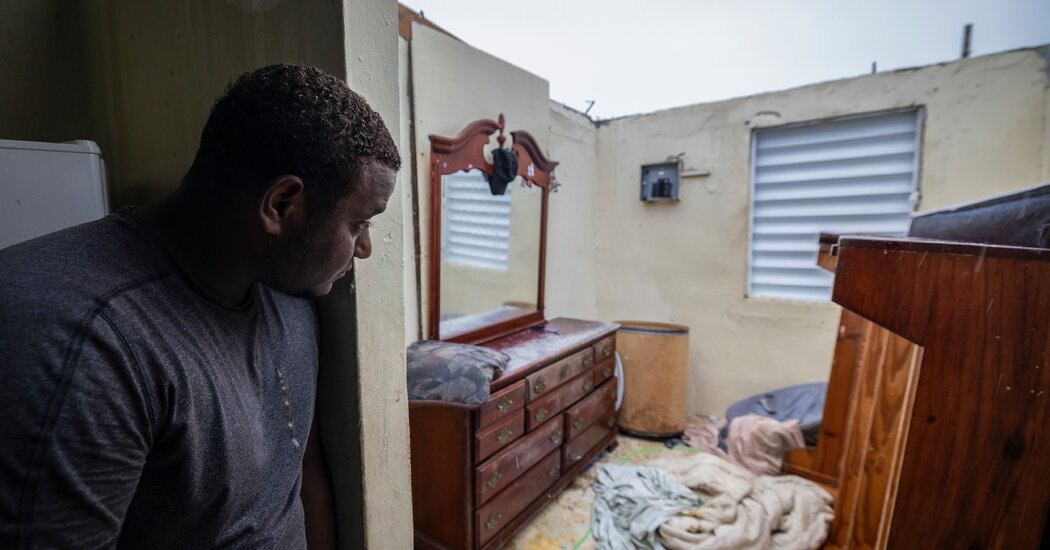 Hurricane Fiona made landfall in Puerto Rico on Sunday afternoon after knocking out power to all of Puerto Rico, its governor said, as forecasters warned that the storm could bring as much as two feet of rain and cause life-threatening floods and landslides.

Nearly 1.5 million customers were without electricity on Sunday afternoon, according to poweroutage.us, which tracks power interruptions.

Because of the hurricane, the power grid was out of service, the governor, Pedro Pierluisi, said on Twitter. “Protocols have been activated based on established plans to address this situation,” he said.

The collapse of the electrical grid came five years after Hurricane Maria battered Puerto Rico and knocked out the island’s power. Since then, unreliable electricity has been a mainstay of life on the island, leading to a slow recovery and widespread protests by frustrated residents.

The power company LUMA warned on Sunday that full power restoration could take several days. It said that the storm was “incredibly challenging” and that restoration efforts would begin when it was safe to do so.

“The current weather conditions are extremely dangerous and are hampering our ability to fully assess the situation,” it said on its website.

Hurricane Maria struck the island as a Category 4 storm and produced as much as 40 inches of rainfall and caused the deaths of an estimated 2,975 people. On Sunday morning, Fiona strengthened from a tropical storm to a Category 1 hurricane.

Fiona made landfall, meaning the eye of the storm crossed the shoreline, along the southwestern coast of Puerto Rico near Punta Tocon around 3:20 p.m. local time, the National Hurricane Center said.

Significant flooding had already occurred, and it was likely the rain would continue through Monday morning, said Jamie Rhome, the acting director of the National Hurricane Center.

While still a tropical storm, Fiona brought flooding to Guadeloupe, an island southeast of Puerto Rico, and there was at least one storm-related death in the capital, a government official said on Saturday.

In Puerto Rico, rainfall totals could reach 12 to 16 inches, with local maximum totals of 25 inches, particularly across eastern and southern Puerto Rico, forecasters said. The rain threatened to cause not only flash flooding across Puerto Rico and portions of the eastern Dominican Republic but also mudslides and landslides.

Fiona had winds of about 85 miles per hour and prompted hurricane warnings for Puerto Rico and the coast of the Dominican Republic from Cabo Caucedo to Cabo Frances Viejo, the center said.

Public schools on the island will be closed on Monday, he said, and only public employees who perform essential roles or respond to emergencies should report to work.

As of Sunday morning, 118 shelters were open in Puerto Rico and nearly 800 people had sought refuge. A website offers updates about Hurricane Fiona in Puerto Rico, including the status of hospitals, electricity and transportation.

Heavy rains from Fiona will continue into Sunday night in Puerto Rico, forecasters said. The storm surge and tide could flood normally dry areas along the coast, and forecasters warned that the water could reach one to three feet on the southern coast if the peak surge occurred at high tide.

The storm could bring four to six inches of rain to the British and U.S. Virgin Islands and up to 10 inches on St. Croix, forecaster said.

The storm is expected to strengthen on Monday and Tuesday as it moves near the Dominican Republic and over the southwestern Atlantic, before it could possibly impact the Bahamas, the Hurricane Center said.

The Atlantic hurricane season, which runs from June through November, had a relatively quiet start, with only three named storms before September. There were no named storms in the Atlantic during August, the first time that happened since 1997. But storm activity picked up in early September, with Danielle and Earl, which both eventually became hurricanes, forming within a day of each other.

In early August, scientists at the National Oceanic and Atmospheric Administration issued an updated forecast for the rest of the season, which still called for an above-normal level of activity.

In it, they predicted the season could include 14 to 20 named storms, with six to 10 turning into hurricanes that could sustain winds of at least 74 m.p.h. Three to five of those could strengthen into what the agency calls major hurricanes — Category 3 or stronger — with winds of at least 111 m.p.h.

Last year, there were 21 named storms, after a record-breaking 30 in 2020. For the past two years, meteorologists have exhausted the list of names used to identify storms during the Atlantic hurricane season, an occurrence that has happened only one other time, in 2005.

The links between hurricanes and climate change have become clearer with each passing year. Data shows that hurricanes have become stronger worldwide during the past four decades. A warming planet can expect stronger hurricanes over time and a higher incidence of the most powerful storms — though the overall number of storms could drop, because factors like stronger wind shear could keep weaker storms from forming.

Hurricanes are also becoming wetter because of more water vapor in the warmer atmosphere; storms like Hurricane Harvey in 2017 produced far more rain than they would have without the human effects on the climate, scientists have suggested. Also, rising sea levels are contributing to higher storm surge — the most destructive element of tropical cyclones.