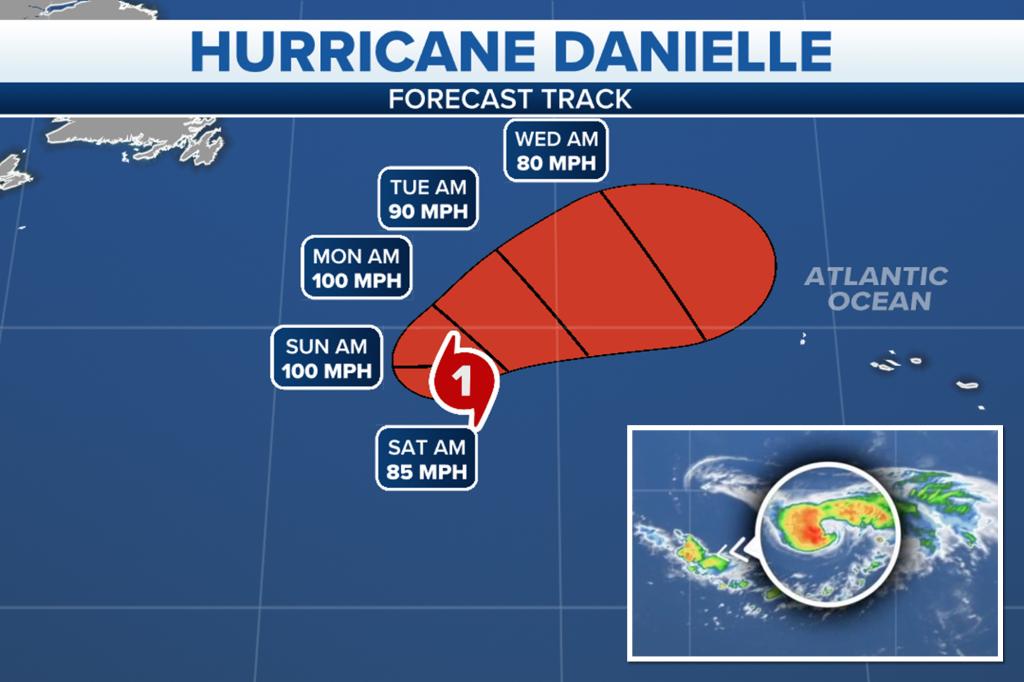 It took until September, but the Atlantic Ocean has its first hurricane of the 2022 season: Hurricane Danielle.

Hurricane Danielle is now a Category 1 storm swirling in the North Atlantic Ocean. Its estimated peak sustained winds in the storm’s center are at 75 mph with higher gusts.

The storm sits quite far north in an area of warmer-than-usual water but is no threat to land.  Its closest reference point is about 885 miles west of the Azores.

Forecasts indicate it will continue strengthening over the weekend and reach a peak intensity of about 100 mph by Sunday morning as it drifts toward the northeast, which would make Hurricane Danielle a Category 2 storm. It will eventually enter cooler waters and weaken early next week.

What about Earl? Tropical disturbance approaching Caribbean could be next named storm

Is “Earl” not too far behind?

Danielle is just one of three tropical disturbances the FOX Forecast Center is monitoring in the Atlantic basin for possible development over the next several days.

The next system in the Atlantic to become a tropical storm with winds of at least 40 mph will earn the name Earl.

Organization has been slow due to the combination of hostile upper-level winds and dry air.

“Just east of the Lesser Antilles is a cluster of thunderstorms becoming a little bit more organized under that area of low pressure,” FOX Weather meteorologist Michael Estime said. “And that possible development area has increased over the next five days.”

There is yet a third area in the Atlantic Ocean that forecasters will keep a close eye on.

One of the disturbances is off the coast of Africa, and the NHC has given it a low chance of development, according to FOX Weather hurricane specialist Bryan Norcross.

“It appears to be a large system, so it will have a shot at holding off the dry air,” Norcross said. “Obviously, we’ll have a long time to watch this disturbance.”

But the National Hurricane Center dropped the disturbance’s chance of developing from 40% to now just 20% with its Friday morning update.

The eastern Pacific Ocean is bustling with tropical activity again after a several week break with Tropical Storm Javier.

The tropical storm is forecast to strengthen a little but remain a tropical storm as it eventually curves out to the west and out into the open Pacific.

While the storm is not forecast to approach land, dangerous, life-threatening swells and rip currents are possible along the central and southern Baja California peninsula. The area could see 1-2 inches of rain with isolated amounts reaching 4 inches.