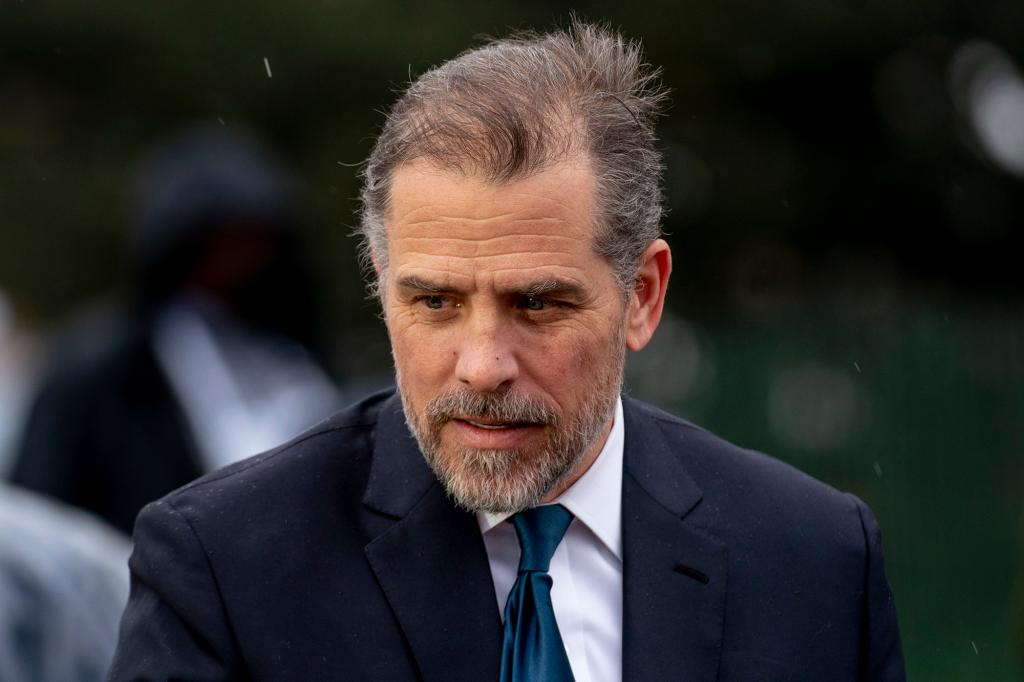 Hunter Biden desperately insisted his brother’s widow, Hallie Biden, get screened for HIV as their torrid affair cooled off in the summer of 2018, emails show.

Biden, 52, implored Hallie to be tested for HIV in an email sent to Beau Biden’s widow on July 27, 2018, about a month before he fathered an out-of-wedlock child with former stripper Lunden Roberts.

“You need to inform me of the result,” Hunter wrote in the email found on his abandoned laptop, a copy of which was obtained by The Post. “TODAY. I am getting tested today. I have been sick scared Hallie and you [hang] up on me.”

Hunter also accused Hallie of being detrimental to his mental health and trying to drive a wedge between him and niece Natalie some three years after his brother, Delaware Attorney General Beau Biden, died of brain cancer at 46.

“The love you give is so disturbing,” Hunter wrote in the message with an all-caps subject line of “YOU NEED TO GET TESTED FOR HIV HALLIE.”

Hunter went on to ask Hallie to “stop the bullsh-t” regarding his niece, accusing his sister-in-law of trying to “turn” the young teen against him.

“Then [I’ll] stop talking to her and will not [try] [to] see her at all,” Hunter’s message continued. “[I’d] rather that then you continuing to do this to her. Its sick and disturbed.”

In March 2017, Page Six exclusively reported Hunter and Hallie were having an affair and that Hunter had separated from Kathleen Biden.

President Biden’s son revealed in his April 2021 memoir, “Beautiful Things,” that he and Kathleen divorced after his first wife found steamy text messages on an iPad between himself and his late brother’s widow. Hunter detailed the “rampages” he went on in his unflinching 271-page book following the divorce, during which he started the affair with Hallie.

But the relationship had apparently soured by the following summer — with Hunter suggesting to his former flame that she seek counseling.

“[You’re] not clean and sober Hallie,” Hunter wrote. “You’ve found a new release for your poisoned mind … you need serious long term professional help and I hope you get it. I promise I will try my best to make that happen.”

Hunter then concluded the message with a stern demand to his sister-in-law.

“I love you hHallie [sic] even when youre cruel,” he wrote. “GET TESTED AND TELL ME RESULTS Today.”

Just weeks earlier, the couple had viciously argued in emails – with Hallie accusing Hunter of calling her “incessantly” only to “block” her when she got back to him, according to emails obtained by The Post.

“Please calm down Hallie and focus on your sobriety,” Hunter replied on July 15, 2018. “The tone you’re using with me is so angry. You aren’t a bad person Hal just because you’ve done bad things, you can do this without having to attack me or Natalie or whomever else you might see as the reason for you’re [sic] problems. Focus on you and know that you and only you will determine whether or not you can get sober for real.”

Hallie then accused Hunter of not getting a “day of sobriety yet” while thanking him for the “passive aggressive a–hole email” and not answering her original question on whether he was attending a funeral.

“You will wake up one day and realize that you can actually think of an act of love that you can do for someone besides yourself,” Hunter wrote Hallie. “And I hope you have someone to turn to in bed in my brothers’ house and that that act of love can be for him or her or them and not a secret someone. That will be a special day in your life and I hope that you remember me with a smile.”

Hunter proceeded to reference Beau once again, the emails show.

“And don’t feel as if you lost the two best men you or anyone could have ever even dreamed of,” the exchange continued. “You got just what you wanted for a time and all is not lost. My family will never disrespect you around the children or in public.”

Kathleen Biden filed for divorce from Hunter in December 2016. She later alleged in court filings that he “created financial concerns” for the family by spending extravagantly on drugs, alcohol and prostitutes.

The divorce was finalized in April 2017, and Hunter briefly lived with Hallie Biden and her two children in Maryland before they separated and he moved to Los Angeles, Hunter told the New Yorker. Hunter also lost a paternity case filed by Roberts, who gave birth to their daughter, Navy Joan Roberts, in August 2018.

In 2019, Hallie and Hunter revealed they had broken off their relationship after Joe Biden learned of the affair from Page Six — with Hunter begging his father to issue a statement blessing the controversial liaison, he told the New Yorker.

“We are all lucky that Hunter and Hallie found each other as they were putting their lives together again after such sadness,” the Democratic presidential front-runner said at the time.

Hunter — who has characterized his relationship to Hallie as a “mess” he’s taken responsibility for — is now married to his second wife, Melissa Cohen. They have a 2-year-old son named Beau.

A message left for Hunter’s attorney was not returned early Monday. Hallie Biden, 47, did not immediately return inquiries seeking comment.

The emails surfaced as Hunter Biden is facing a federal investigation over his tax filing, which insiders say has widened to include potential money laundering and violations of lobbying laws. House leaders have also vowed to subpoena the younger Biden before Congress to answer questions should they retake control of the chamber in 2022.

Hunter Biden, meanwhile, conceded in April 2021 while promoting his memoir that the infamous laptop dropped off at a Delaware computer repair shop “certainly … could be” his following reporting by the New York Post revealing Joe Biden’s involvement in his family’s influence-peddling operation. The laptop also contains explicit photos and videos of several women, including Hallie Biden.