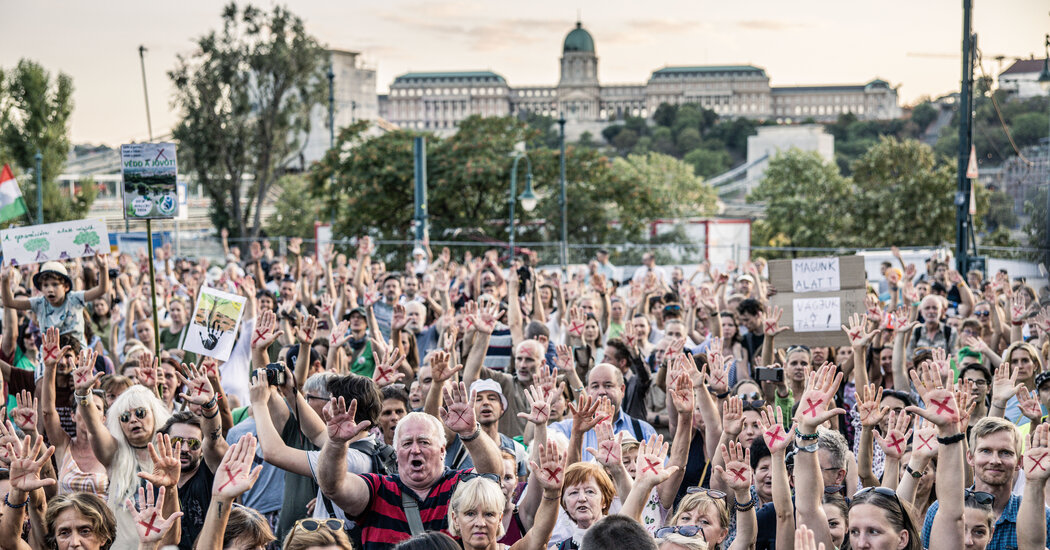 BUDAPEST — He has won four consecutive elections, bent the judiciary and the news media to his will, rewritten the Constitution and turned a small East European backwater into an unlikely beacon for “America First” Republicans and an outsize liberal bugbear.

But Prime Minister Viktor Orban of Hungary and his governing party, Fidesz, now confront forces resistant to his implacable political will: the laws of economics as the government struggles with a big budget deficit and ordinary Hungarians with soaring inflation.

“Reality is suddenly knocking on Orban’s door,” said Peter Bod, a former minister and the governor of Hungary’s central bank under a previous conservative government. Hungary now has such a poor credit rating, he added, “we are between Botswana and Tobago,” referring to Trinidad and Tobago.

Widespread grumbling over Hungary’s economic woes, particularly inflation and a rapidly depreciating national currency, and regular street protests in Budapest, the capital, do not threaten the government: It does not face a general election until 2026.

But they have put Europe’s most vociferous critic of the European Union and a stalwart defender of national sovereignty in an uncomfortable position: going cap in hand to Brussels to beg the “Eurocrats” he has spent years reviling to cough up tens of billions of dollars whose payment has been stalled by his defiance of the bloc’s rules.

At the same time, Mr. Orban has started to roll back the budget-busting measures — popular but very expensive price controls on electricity and gasoline — that helped Fidesz secure a landslide victory in an April election.

“Everybody here voted for Fidesz, but a lot of us now feel betrayed,” said Robert Abraham, 48, a professional drummer in Retsag, a down-at-heel town in a district that gave the Fidesz candidate 60 percent of its vote in April.

Mr. Abraham is not really bothered by the expected jump next month in electricity prices when the government scales back subsidies: He heats his family’s home and stove with firewood. But the price of that, he said, had doubled since Election Day.

To try to calm anger among people like Mr. Abraham, the government recently relaxed restrictions on tree cutting in forests. But this infuriated green activists and others, who protested this week in defense of Hungary’s threatened forests.

For Ilona Debre, a Christian from a nearby village who said she was disgusted by Mr. Orban’s self-declared role as a defender of Christian values, the economic mess provides hope that “God will finally punish this government.” That, she added, is a long shot because “Hungary is a nation of sheep,” but “we are still hoping that Brussels will knock Orban on the head by not giving him any more money.”

Unlike other European countries, Hungary has kept the supply of oil and natural gas relatively stable, thanks to a policy of cozying up to the Kremlin at a time when the rest of Europe is trying to wean itself off Russian energy.

The Hungarian energy market, however, has been distorted by the government’s pre-election decision to impose a cap on the price of gas paid by consumers. Last week, Dallas, a small gas station outside Retsag worried about running out of supplies, placed a 2.6 gallon limit for each customer, except for those willing to pay a much higher market price.

“This is typical socialist economic policy — price fixing always leads to shortages,” said Lajos Bokros, an economics professor and a former finance minister who presided over a harsh 1990s austerity program and helped privatize state assets like electricity companies. Those companies are now back in the state’s hand after Mr. Orban nationalized them.

He rarely misses a chance to taunt Germany and boast about protecting homegrown businesses but has for years wooed German companies, particularly its carmakers, with sweetheart deals, while stamping on local business people who cross him.

“I was amazed that they loved him so much in Texas,” Mr. Bod, the former central bank governor, said. “There is no free market here.” On top of that, he added, “You can’t carry a gun here, but you can get a free abortion.”

Hungary’s inflation rate of nearly 14 percent in July, higher than the July average rate of nearly 9 percent in countries that use Europe’s common currency, the euro, has been driven in part by the war in Ukraine. But economists say that inflation in Hungary, fueled by loose monetary and fiscal policies, was on the rise long before Russia invaded Ukraine in February.

Those policies juiced economic growth, forecast at around 4 percent this year, higher than in most of Europe, but left the government with a big deficit, high debt-servicing costs and no obvious way to fill the hole other than with money from the bloc.

In an assessment last week, the credit rating agency Standard & Poor’s revised Hungary’s economic outlook to “negative” from “stable.” The agency warned that without money from Brussels, Hungary’s economic growth rate and its government accounts could suffer badly.

Another rating agency, Fitch, provided a slightly more upbeat assessment, giving Hungary a “stable” outlook in July. But it still voiced alarm over “high public debt, a record of unorthodox fiscal-and-monetary policy moves and a worsening of governance indicators.”

In an increasingly authoritarian system, Mr. Orban alone sets economic and other important policy, often shifting direction to wrong-foot his demoralized political foes and avoid rupturing relations with investors and the European Union. After months of insisting that E.U. funds had been blocked because of Hungary’s passage of a law banning “homosexual propaganda,” the government recently dropped that and moved to address the real reason for the blockage, offering to meet some of Brussels’ demands over corruption in government contracts, poor transparency and other rule of law issues.

Under pressure over the budget deficit, Mr. Orban’s government decided in June to levy an “excess profit tax” on a range of companies, some of which had made windfall profits from the soaring price of oil after Russian invaded Ukraine. But others were struggling, including airlines hammered by high fuel prices and the coronavirus pandemic.

Michael O’Leary, the boss of the Irish budget airline Ryanair, described the tax as “beyond stupid” and said he would send Hungary’s economic development minister a copy of “Economics for Dummies.” When Ryanair said it would pass the additional costs on to its passengers, the minister said Hungary would start an investigation into the airline.

Mr. Orban has tried to change the subject, blaming the war in Ukraine and “stupid sanctions” imposed by the European Union for Hungary’s economic troubles and turning up the volume on his favorite culture war themes.

“Orban never likes to talk about financial issues or budget issues,” said Mr. Bokros, the former finance minister. “For him, they are boring issues. Much more interesting for him is the decline of the West,” he said.

Mr. Orban’s office and three ministries responsible for economic matters did not respond to requests for interviews.

At a speech last month, just days after news broke that his government was reneging on its election promises to keep electricity prices capped, Mr. Orban pleaded that the conversation return to what he described as the basics.

“There is a war, an energy crisis, an economic crisis and wartime inflation,” he said, “and all of this is drawing a screen in front of our eyes, a screen between us and the issues of gender and migration.” It is on these issues, not the economy, Mr. Orban added, that the future would be decided: “This is a great historic battle that we are fighting — demography, migration and gender. And this is precisely what is at stake in the battle between left and right.”

He then veered into open racism with a warning that Europeans must not “become peoples of mixed race.” One of his longtime advisers resigned, describing Mr. Orban’s speech as “worthy of Goebbels,” Hitler’s propaganda chief.

The furor succeeded in changing the conversation, though it probably did not help Hungary’s chances of getting the European Union to hand over the money it desperately needs.

“He made a mistake with the mixed-race line,” said Balint Ruff, a political analyst in Budapest, adding: “If you say this you are not just insulting Brussels but talking about race in a way that is off limits for everyone, including Euroskeptics.”

All the same, most analysts, mindful of Hungary’s recent concessions and the bloc’s record of indulging Mr. Orban, still expect the European Union to release 15 billion euros, or about $15 billion, in pandemic relief money and billions more in other funds in the coming months.

Mr. Bokros said this would give Hungary breathing room and assuage concerns over a financial meltdown. But, he added, Hungary will not be out of the woods. Mr. Orban, he said, had “already spent the money he expects to get from the E.U.”