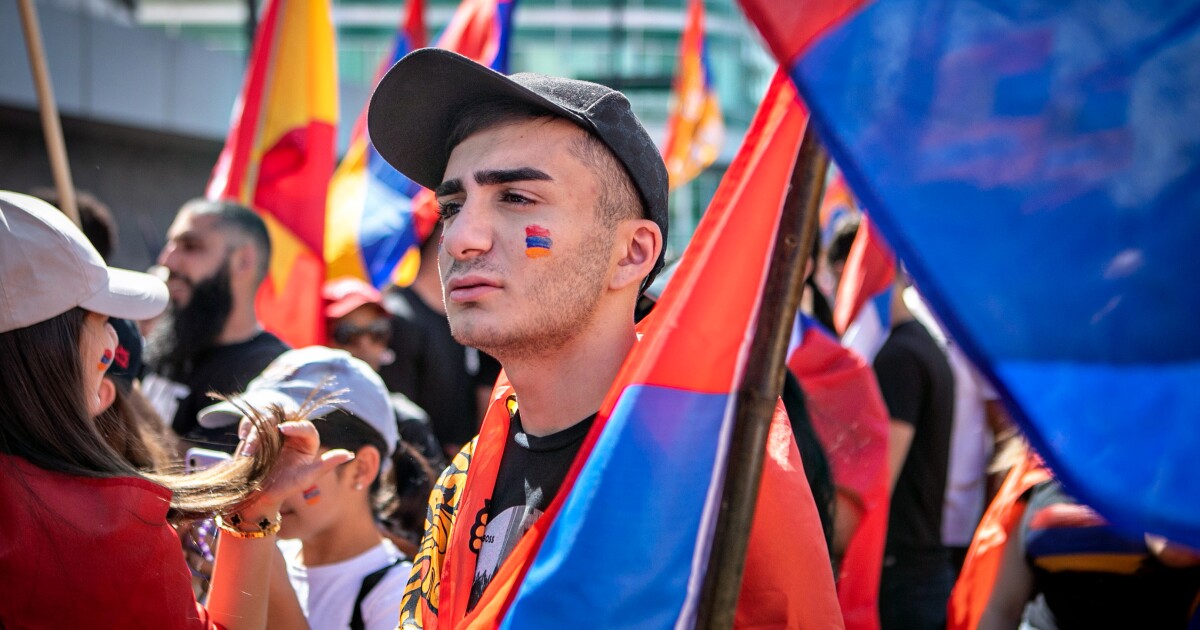 Hundreds of people gathered outside the Turkish Consulate in Beverly Hills on Sunday to demand the Turkish government recognize the Armenian genocide and end its support of Azerbaijan in the Artsakh.

The rally organized by the Armenian Youth Federation was one of several held across the Southland to mark the 107th anniversary of the massacre. Los Angeles County is home to the largest population of Armenians in the United States.

Speakers at the protest honored the victims of the genocide and the strength of its survivors, told of Armenia’s rich history and culture, and called for Turkey to finally acknowledge the loss and trauma it inflicted upon the Armenian people.

Outside the Turkish Consulate on Wilshire Boulevard, rally attendees waved the national flag of Armenia and chanted “1915 never again! Genocide never again!” and “Eastern Turkey is Western Armenia!” — referring to the historical homeland of Armenians. They placed their palms in red paint and pressed them onto a white banner, an installation that represented Armenian bloodshed.

By many estimates, a million Armenians died in the Ottoman Empire between 1915 and 1920, one of the first genocides in a century that would be defined by mass killings. Ignored by most of the world and denied by the Turkish government, the Armenian slaughter was considered for generations a “perfect genocide,” as its victims were forgotten and its perpetrators went unpunished.

Armenians continue to face threats, protesters said. With the help of Turkey in 2020, Azerbaijan launched a war in an attempt to remove ethnic Armenians living in the disputed region of Nagorno-Karabakh.

“Our community is also calling on the U.S. government to prevent Turkey and Azerbaijan from committing ongoing war crimes against the Armenian people,” said Alex Galitsky, spokesman for the Armenian National Committee of America, an organizer of the event.

Until President Biden in 2021 officially called the killings a genocide, American presidents had also declined to do so. They instead classified the deaths at the hands of the Ottoman Empire as an atrocity — but not a genocide.

The L.A. County Board of Supervisors last month proclaimed April as Armenian History Month and last week passed a motion declaring April 24 as Armenian Genocide Remembrance Day in Los Angeles County. April 24 is also observed throughout the Armenian diaspora and is a national holiday in Armenia.