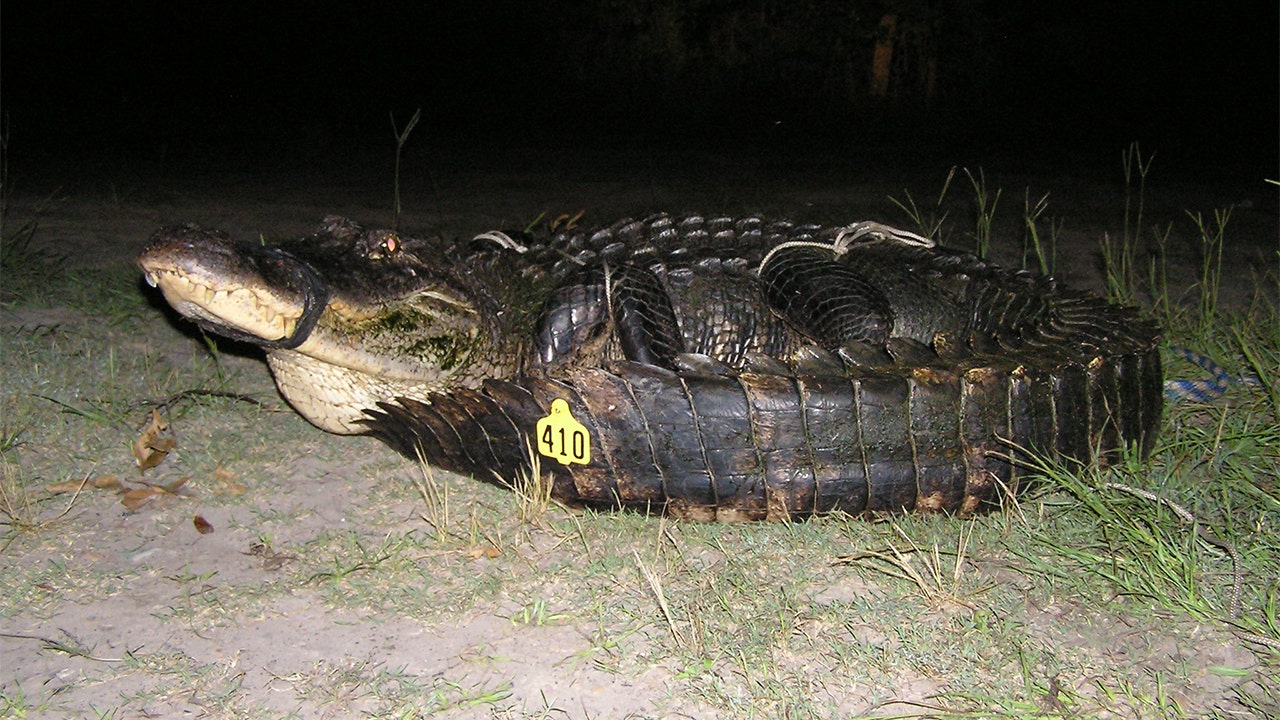 A 10-foot, 2-inch-long alligator was caught and killed by gator hunters in Mississippi earlier this week.

The huge reptile even broke the Mississippi record for longest female alligator, according to a press release from the Mississippi Department of Wildlife, Fisheries and Parks (MDWFP).

Jim Denson and Richie Denson, of Madison, Mississippi, caught the alligator on the Pearl River on Sunday, the press release said.

The alligator had previously been captured and tagged by the MDWFP in 2009 as part of a research project to study growth rates and location information of the reptiles, according to Ricky Flynt, the MDWFP’s alligator program coordinator.

This massive, 10-foot, 2-inch-long alligator was caught on the Pearl River in Mississippi on Sunday. Seen in this image is the alligator after being tagged in 2009, according to the MDWFP.
(Mississippi Department of Wildlife, Fisheries and Parks)

“At that time, the alligator also measured exactly 10 feet 2 inches and was captured within 100 yards of where the Densons killed the record alligator,” Flynt said in a statement.

Part of the research project is to have hunters recapture or harvest the tagged alligators and report on their size and location, the MDWFP said in the release.

“Each recapture provides us with interesting data that no other states are obtaining,” Flynt said.  “I am very proud of what we are learning.”

Flynt continued: “This is just another example of the value of hunters and hunting to wildlife biologists and wildlife conservation. Much of what biologists know about many species across the world came from similar mark-recapture projects involving hunter harvest data.”

Flynt said the alligator was estimated to be 75 to 100 years old.

Aside from breaking a state record, the alligator tied with a previous world record for the longest free-ranging wild female alligator, which was caught in Florida in 1984.

However, that record has since been broken. In 2021, a 10-foot, 6.75-inch alligator was caught in Florida, which is the current record holder, according to the MDWFP.

Mississippi’s public waters alligator hunting season for 2022 opened on Friday, Aug. 26, and will close at noon on Monday, Sept. 5, the press release said.