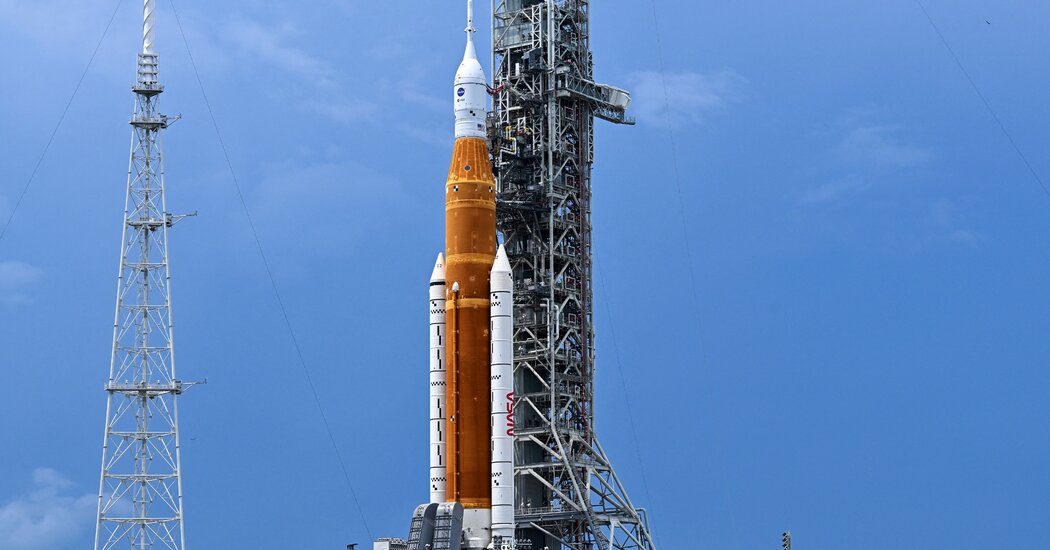 Before NASA can send astronauts back to the moon, it needs a successful test flight of the Space Launch System, a giant rocket built for the agency with lunar missions in mind. On Monday, we’ll get to see the first attempt at launching this massive rocket to orbit, this time with no astronauts aboard the Orion capsule it will send to space.

Here’s what you need to know about the mission, Artemis I.

When is the launch and how can I watch it?

The launch is scheduled for 8:33 a.m. Eastern time, but in case of unfavorable weather or technical glitches, the liftoff can be pushed back as much as two hours, to 10:33 a.m.

NASA Television’s online coverage of the Artemis I launch begins at midnight at the start of Monday as the process of filling the rocket’s giant propellant tanks starts. The agency’s full coverage will begin at 6:30 a.m. on Monday.

Lightning strikes at the launchpad this weekend did not cause any problems.

“No issues, no concerns or constraints from the lightning events at this point,” Jeff Spaulding, the senior NASA test director for this mission, said during a news conference on Sunday.

You can subscribe to the Times space and astronomy calendar to get a reminder about the launch and other events on your personal digital calendar.

If Artemis I gets off the ground, coverage will continue for about two hours after liftoff through what is known as the trans-lunar injection engine firing to push the Orion spacecraft out of low-Earth orbit on a trajectory to the moon. If the launch is postponed, NASA has backup opportunities scheduled for Sept. 2 or Sept. 5.

What are the Space Launch System and Orion?

For astronauts to get to the moon, they need a big rocket, and the Space Launch System is that rocket — the most powerful one since Saturn V took NASA astronauts to the moon in the 1960s and 1970s. The one waiting on the pad to launch on Monday is 322 feet high, and will weigh 5.5 million pounds when filled with propellants.

The rocket, known as S.L.S., has some visual similarities to the retired space shuttles. This is by design: To simplify development of its new moon rocket, NASA reused much of the 1970s space shuttle technology.

The Space Launch system’s cargo on Monday is Orion, a capsule that is designed for trips of multiple weeks beyond low-earth orbit. It will be uncrewed for this flight but can carry four astronauts. If this flight is a success, a quartet of astronauts will travel on the next mission, Artemis II.

What happens during the flight?

After liftoff, several events will occur in quick succession.

Just over two minutes after leaving the ground, the two skinnier side boosters attached to the gigantic core stage of the Space Launch System will exhaust their solid rocket fuel and drop away, falling into the Atlantic Ocean.

Eight minutes into flight, the four engines of the core stage will shut down. The stage will then drop away and the rocket’s second stage and the Orion capsule that will carry astronauts in the future will then be on their own in space.

On Day 6, Orion will begin its orbit of the moon.

On Day 24, Orion will leave the distant retrograde orbit and start the return trip to Earth. If Artemis I launches Monday, splashdown will be on Oct. 10, ending a 42-day mission.