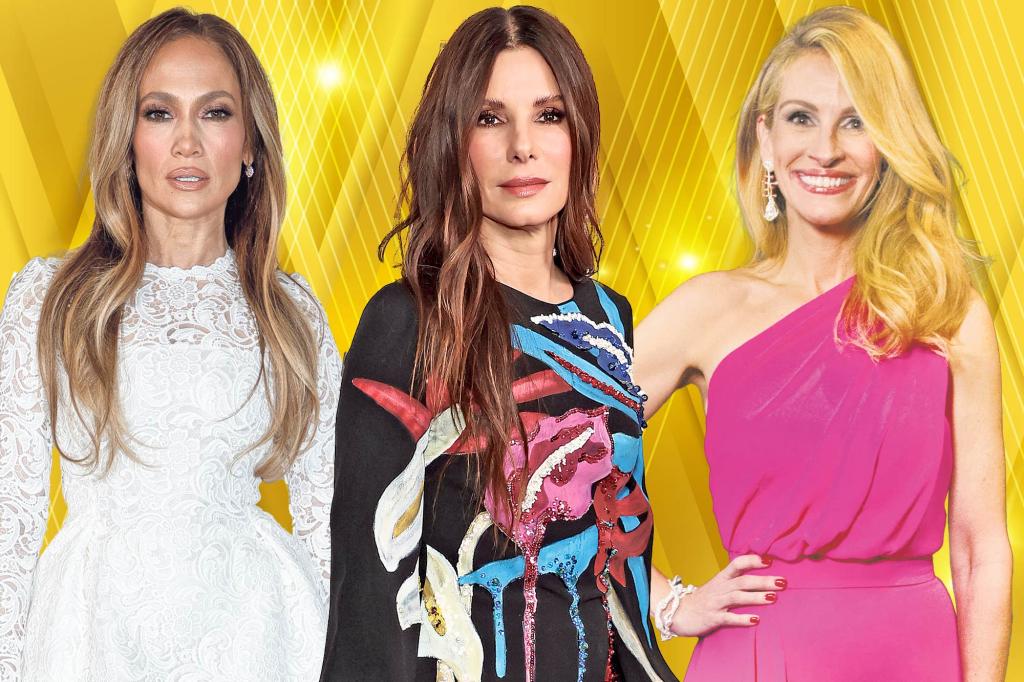 Know who beat “The Batman” at the box office? Not an Avenger or an animated hero but Sandra Bullock.

Even more incredible: Bullock is 57. Her onscreen love interests in “The Lost City,” one of the few films to lure theatergoers back post-COVID, were Channing Tatum, 42, and Brad Pitt, 58.

Imagine that — pairing an AARP-eligible male heartthrob with an age-appropriate female costar. No small feat considering Pitt’s last onscreen love interest was Margaret Qualley, 25 years old when “Once Upon a Time in Hollywood” was released.

Bullock’s not alone. She’s part of a small yet strong cohort proving the viability of the 50-something romantic heroine: Jennifer Lopez, at 52, headlines two romcoms this year: “Marry Me,” and “Shotgun Wedding.”

Before you object, quality’s not important here — networks and cinemas and streamers are awash with middle-aged male mediocrity. The mere existence of these projects, starring women of a certain age, is the point.

It’s been a slow burn, but Hollywood is finally recognizing a trend corporate America long ago seized upon: The spending power of the 50-something woman. This is the largest demographic, according to a 2018 Forbes report, earning annual salaries of over $100,000.

Forty million women — “the healthiest, wealthiest and most active generation in history,” the magazine said — with over $15 trillion in disposable income.

And surprise: They want to see themselves, and women older than they are, represented. Hence L’Oréal ambassador Helen Mirren on the cover of People’s Most Beautiful issue. Lauren Hutton on the cover of this month’s Harper’s Bazaar. Michelle Pfeiffer on the cover of The Hollywood Reporter.

“Grace and Frankie,” starring Jane Fonda, 84, and Lily Tomlin, 82, is wrapping up its seventh and final season on Netflix — the streamer’s longest-running show ever.

“We’re like Hepburn and Tracy,” Fonda said. She’s right. Their characters are cool, witty, interested and interesting, sex still a part of their lives.

And whatever the failings of “ . . . And Just Like That” — yes, they are legion — you can’t discount the acknowledgement of successful women in their fifties and sixties navigating late-in-life romance. It’s terrible and it’s gotten an order for season two.

Take away the sniping and the fighting, and the appeal of “The Real Housewives,” which premiered in 2006, has always been clear: These women are mostly middle-aged yet in the most compelling stage of their lives. Freed from childrearing, single or divorcing or divorced, they are mainly making their own money, buying their own luxury goods, chartering private planes to villas and yachts.

These women are the same age as “The Golden Girls” were. That’s never not a mind-blowing fact.

And then, of course, there’s Nancy Meyers, one of the few female writer-directors of any age. (For the record, she’s 72.)

Long underestimated as the weaker part of a married team — her now-ex-husband assumed to be the genius — Meyers fought to make two now-classic romcoms about 50-something heroines: 2003’s “Something’s Gotta Give,” starring Diane Keaton as a famous playwright undone by love, and 2009’s “It’s Complicated,” with Meryl Streep joyfully navigating a middle-aged love triangle and a dream home renovation while running her own business.

What took so long to glamorize the grown-up woman? What do you think?

“Something’s Gotta Give” almost didn’t get made. “When I went to pitch that,” Meyers told Vulture, “I knew, I could just feel that these people are not making a movie with a 55-year-old woman at the center.”

“These people,” of course, were most likely — don’t hold me to it — male studio heads. But in then-Sony exec Amy Pascal, Meyers got her green light.

“Amy,” Meyers told Vulture, “being a woman, understood it.”

That film grossed $266.7 million at the box office. Yet getting “It’s Complicated” made was just as hard.

“My kind of movie,” Meyers told the Guardian in 2015, “is not the kind of film that studios have wanted to make for a while now.”

The appeal for younger women, Meyers told Vulture, is in seeing “a really super-functioning, confident woman who’s made a life for herself . . . and they’re all starting their careers, and I think they must look ahead and say, ‘Yeah, I like that for my future.’”

The flailing Netflix does too. Guess who they’ve lured out of retirement, reportedly granting her carte blanche, to make a movie? None other than Ms. Meyers.