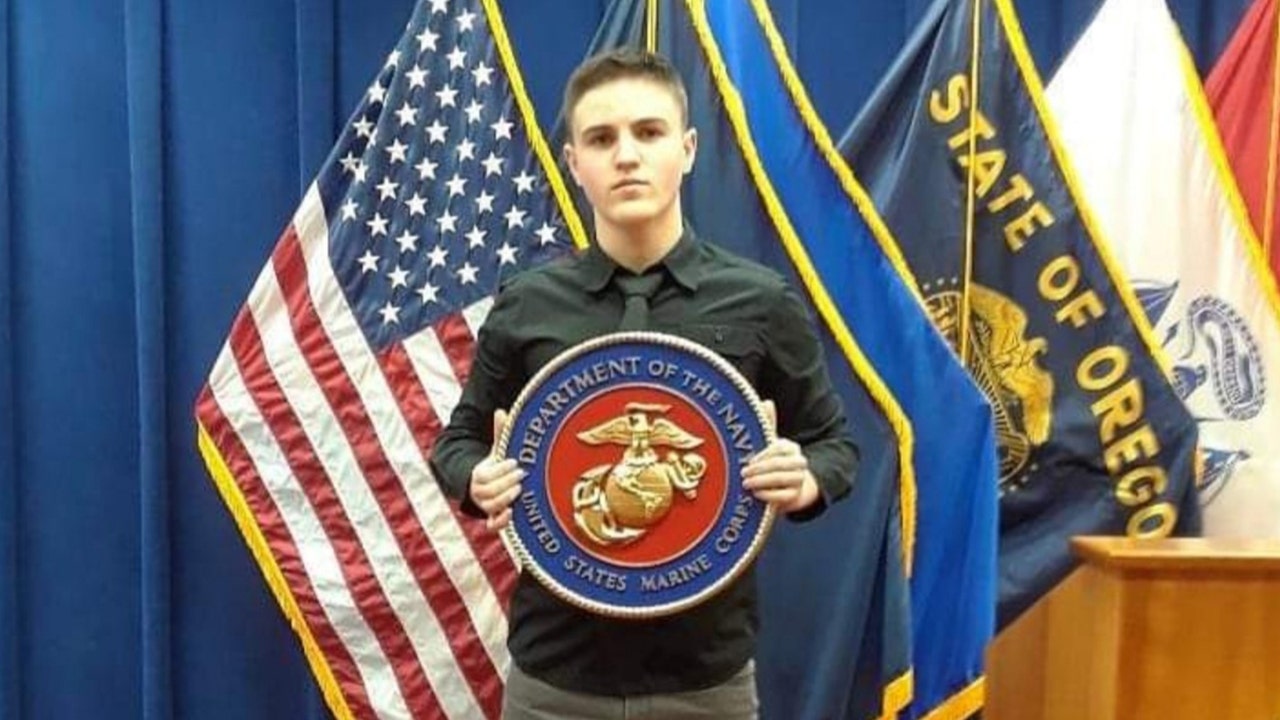 JACKSON, Wyo. – This article is part of a Fox News Digital series examining the consequences of the U.S. military withdrawal from Afghanistan one year ago this week.

Lance Cpl. Rylee James McCollum bought a stuffed tiger while deployed in Jordan and slept with it every night. The Marine, excited to be a father, bought it as a gift for his soon-to-be-born daughter.

“He took a rash and a crack for sleeping with a stuffed animal,” Rylee’s father, Jim McCollum, told Fox News. “But it meant something to him.”

The tiger made it home safely, but Rylee, 20, didn’t. He was one of the 13 U.S. service members killed in the Aug. 26., 2021, suicide bombing at the Kabul airport during the Afghanistan evacuation.

Lance Cpl. Rylee McCollum was one of the 13 service members killed by a suicide bomber at the Kabul airport in August 2021.
(Courtesy of McCollum family )

‘There was a swagger’

Rylee knew he wanted to be a Marine ever since he was 4 years old, his family told Fox News.

His sister Roice, 23, said “he talked about it his whole life.”

Rylee, born and raised in Jackson, Wyoming, always marched to the beat of his own drum with a sharp wit and cheeky sense of humor.

“There’s a lot of Rylee-isms out there, some appropriate, some not so much,” another sister, Cheyenne, 27, told Fox News. “He was so smart, and it got him into a lot of trouble. But he always knew what to say to get out of trouble.”

Jim said Rylee had many facets and that his son could come off as “very abrasive.” Really, “he was a kind, caring, loving, just beautiful kid. But you had to be inside his circle to know that.”

LEFT BEHIND AFTER US WITHDRAWAL, SOME FORMER AFGHAN SPIES AND SOLDIERS TURN TO ISLAMIC STATE

Rylee’s life revolved around wrestling from 4 years-old until the day he enlisted in the Marines.
(Courtesy of the McCollum family)

Rylee began wrestling around the same time he started saying he’d become a Marine. His dedication to the sport had a profound effect on him.

“Wrestling was his life,” Jim said. “You saw him become who he was, who he was going to be.”

He also had an affinity for U.S. history.

“He knew every war, every battle, every gun, every skirmish we ever had, every president,” Jim said. “That’s one of my favorite memories of him, just how engaged he was and just how it all intertwines and put him to the place where he was when he died.”

On Feb. 26, 2019, Rylee’s 18th birthday, Jim received a call from his son asking his dad to come to Jackson Hole High School to sign enlistment papers.

“I dropped everything,” Jim said. “Pretty proud moment for me.”

The effect that joining the Marines had on Rylee was evident.

“You could just see, the chest was out, chin was out,” Jim said, recalling his son’s graduation from boot camp. “There was a swagger, for lack of a better word.”

“He accomplished something that he wanted to do, which he always found a way to do, but this one really mattered to him,” Jim added.

Despite his family and friends’ efforts to convince him otherwise, Rylee was committed to joining the infantry.

Rylee got married in on Valentine’s Day in 2021. Soon after, he was sent to Jordan for his first deployment.

Rylee married his wife Gigi Clayton on Feb. 14, 2021, soon before he was shipped out to Jordan for his first deployment.
(Courtesy of McCollum family )

Rylee broke his phone in Jordan, so contact with home was sporadic. His family would look for the green dot next to his name on Facebook indicating he was online to know that he was okay. Sometimes he’d borrow someone’s phone to call or would video chat with a laptop.

Twice, Jim missed group calls with Rylee and his daughters because of work.

One of those was the last time Cheyenne spoke with her brother before he was sent to Kabul.

“I chatted with him for like 10 minutes, just kind of BSing and telling him I miss him, and I love him,” she said, beginning to choke up. Then she realized they should add Jim and Roice to the call.

Roice joined briefly before losing service, but Jim declined the call due to work. He said missing that last call is his one regret.

“I should have stopped working. What’s more important?” he continued. “Hindsight, man, I should have answered that call.”

The McCollums watched the withdrawal from Afghanistan unfold in real-time. The sinking feeling in their gut grew each day.

Rylee’s daughter, Levi, was born 18 days after he was killed in Kabul.
(Courtesy of McCollum family)

Jim could tell something would go wrong during the evacuation. He said it was evident that the situation was a “trainwreck” after seeing Afghans fall off planes leaving the runway.

“It was a hell of a task that was put in front of them,” Jim told Fox News. “Then you start to get a grasp of how desperate situation was … leading right up to the day of the explosion.”

Less than 24 hours after the ISIS-K terrorist detonated a suicide bomb at the Hamid Karzai International Airport, Marines showed up to the McCollum home to share the news about their son.

Still, Jim said “Rylee would have done the same thing 100 times over without question.”

“I would have encouraged him a thousand times over,” he added.

Rylee’s father Jim and his sister Roice often visit the war memorial in the center of Jackson Hole to talk with Rylee.
(Teny Sahakian/Fox News )

“I want her to know who her dad was. Good, bad and otherwise,” he continued. “The funny stories, what a great man he was, what a great father he was going to be.”

Rylee’s name is inscribed on a memorial at the Jackson Hole town center. Students from the local high school painted a rock decorating the base for each member of the McCollum family.

Jim visits every day to talk to his son.

The Gold Star Father said he’d ensure that none of the 13 service members killed during the Afghanistan evacuation would be forgotten.

“Let the world remember: they weren’t just Marines and Army and Navy,” he told Fox News. His t-shirt was styled like a Marine’s and had “US13” printed on it.

“They were all young kids,” Jim said. “Absolutely beautiful people.”