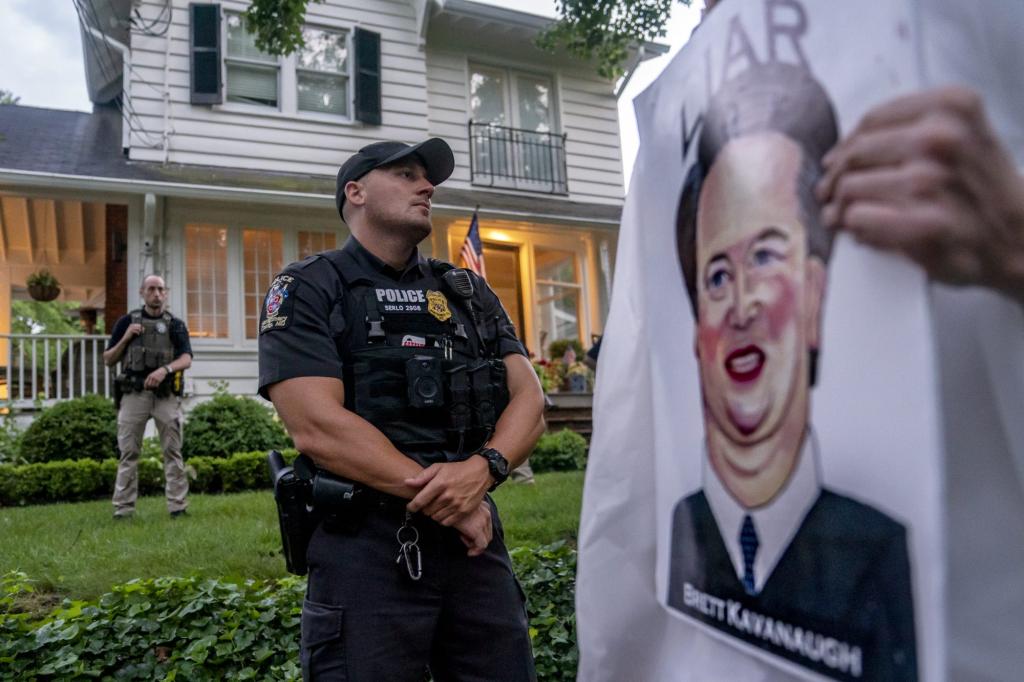 Where is the line between protest and harassment, intimidation and law-breaking?

A few days ago, activists assailed Supreme Court Justice Brett Kavanaugh while he dined at Morton’s steakhouse in DC.

Protests at restaurants are crass, and cross a line in civil society, but they’re nothing new. The left’s new low is targeting judges instead of politicians this way.

Asked about the incident, terminally unprepared White House Press Secretary Karine Jean-Pierre responded, “People have a right to protest. This is what a democracy is.”

Well, no. Federal Statute 18 USC 1507 outlaws protesting “in or near a building or residence occupied or used by such judge, juror, witness, or court officer” with the “intent of influencing” those people.

Makes sense. Protests exist to affect change. But we can’t have judges being coerced in their decision-making by public opinion — or by threats.

Judges aren’t politicians reading polls and sticking their fingers in the wind to see which way the wind is blowing. Nor should we want them to be: Our system demands they be independent of influence.

Democracy can’t just be whatever Democrats want at the time that they want it. Yet Democrats now only become staunch defenders of “democracy” when it’s their allies doing the protesting.

When parents protested at school board meetings, the Biden administration coordinated with the National School Boards Association to mobilize the entire weight of the federal government against them. The Bidenites pretended school board members were routinely getting threats from parents and Attorney General Merrick Garland ordered the FBI to investigate.

Meanwhile, a real threat gets far less attention from these protectors of “democracy.” Last month, a man traveled from California to Kavanaugh’s home in Maryland intending to assassinate the judge. That’s an actual threat to our democracy, not when a Supreme Court ruling by doesn’t go the Dems’ way.

The Morton’s madness isn’t the only recent case of protests going too far. Two weeks ago in Arizona, protesters tried to invade the state capital, according to the Arizona Department of Public Safety. “As groups realized the state legislature was in session, they attempted to breach the doors of the Arizona Senate and force their way into the building.”

Police had to use tear gas to get the riot under control — but not before “significant criminal damage impacted” a number of memorials and buildings. Where are the Democrats condemning this insurrection?

Lefties now think they can do whatever they want when they’re angry about an issue. It’s not just Kavanaugh and it’s not just abortion.

On the July 4, environmentalists blocked the DC Beltway. A video showed one motorist begging them to open a lane. “One lane, I am asking, one lane,” he said, explaining he was on parole and would go back to jail if he was late for work. The protesters couldn’t have cared less. After the agitated man got physical with the road-blockers, he was arrested.

A few weeks ago, a group of environment nutjobs slashed tires on 40 SUVs in New York City.

These protesters don’t care about the rest of us, but only their own emotions. They’re mad, so we have to deal with them disrupting our lives.

These babies have so much power and control over the rest of us because Democrats cater to this with soft language and even frequent defense of these unacceptable protests.

If those targeting a Supreme Court justice, or constantly stopping traffic to get us to pay attention to their concerns, were on the right, every Republican politician in the country would be asked about it ad nauseam. It’s long past the time that Democrats get the same treatment.

Jean-Pierre can keep stumbling around calling it “democracy,” but the rest of us see judges being coerced and roads blocked as intimidation and harassment, not protest.

President Joe Biden and the rest of his party should have to answer for how much of this abhorrent behavior they condone.