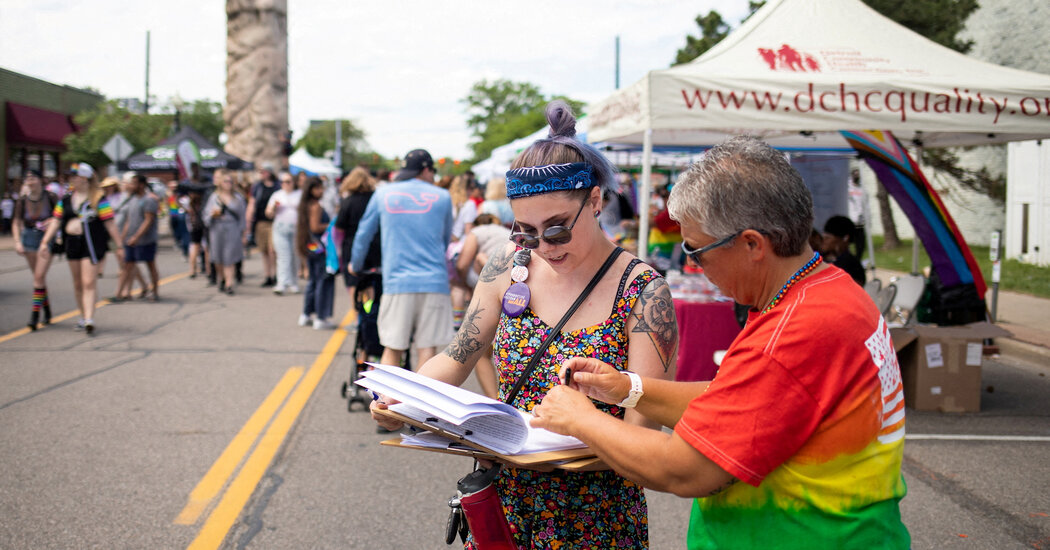 Conservative groups in Michigan filed challenges this week to efforts to put two constitutional amendments on the ballot in November, one that would guarantee abortion rights and the other that would expand voting access.

The challenge to the abortion amendment was based on a lack of spacing between words, which gave some words the appearance of running together. It characterized the typographical errors as “gibberish,” and “incomprehensible argle-bargle.”

One group argued that the Michigan Board of State Canvassers should reject the petition to put that amendment to voters, while a second group took issue with the voting petition, saying it failed to identify every current constitutional provision the amendment would override.

Supporters of the petition for the Michigan abortion amendment said they had submitted more than 730,000 signatures, surpassing the roughly 425,000 required, though the board of canvassers needs to verify them.

Darci McConnell, a spokeswoman for Reproductive Freedom for All, the group promoting the abortion amendment, said that the organization was “confident that we’re in compliance with all legal requirements for ballot proposals” and that hundreds of thousands of voters had “read, understood and signed the petition in support of reproductive freedom for all.”

The petition includes the text of the proposed amendment, which would ensure abortion rights broadly until fetal viability and in cases where “the life or physical or mental health of the pregnant individual” was in danger after viability. On some lines, the text is squeezed tightly. In a 152-page challenge, Citizens to Support MI Women and Children, a group that opposes the amendment, argued that the lack of spacing was unacceptable.

For instance, in a section that reads, “Every individual has a fundamental right to reproductive freedom, which entails the right to make and effectuate decisions about all matters relating to pregnancy,” the challengers said the formatting created “nonexistent words” such as “decisionsaboutallmattersrelatingtopregnancy.”

They described this and other examples as “nonsensical groupings of letters that are found in no dictionary and are incapable of having any meaning.”

“Because the petition fails to use actual words in the full text in its proposed amendment, how can the people know what they are voting for or against?” it said, adding that even if the board of canvassers concluded that these were merely typos, Michigan law did not allow supporters of the amendment to fix such errors at this point in the process.

Citizens to Support MI Women and Children directed a request for comment to Genevieve Marnon, the legislative director for Right to Life of Michigan, an anti-abortion group. Ms. Marnon, who filed an affidavit in support of the challenge, said that petitions were “routinely disqualified for technical errors,” saying that state officials had rejected signatures on a 2019 anti-abortion proposal “for small tears in the petition and for return address stickers’ covering a few words of the ‘essential elements’ of the petition.” (Signatures for that campaign, which extended into 2020, were also challenged on substantive grounds, including claims that some were duplicates.)

Ms. Marnon attached to her email a mocking word-search puzzle whose answer list consisted of words from the petition — all of them separated in the correct places.

Reproductive Freedom for All will file a formal rebuttal by Tuesday, according to Mark Brewer, a lawyer working with the group, who called the complaint a “frivolous Hail Mary challenge.” After that, he said, nonpartisan staff in the Michigan secretary of state’s office will make a recommendation to the board of canvassers on whether the challenge should be upheld.

If the board of canvassers — two Democrats and two Republicans — deadlocks at its meeting on Aug. 31, the next step will be the courts. Under the Michigan Constitution, amendments for the November ballot must be finalized by Sept. 9.

The challenge to the voting rights amendment was filed on behalf of a group called Defend Your Vote. The proposal it objected to would amend the Michigan Constitution to, among other things, require nine days of early in-person voting and expand access to absentee ballots. It would also bar any law or conduct that “has the intent or effect of denying, abridging, interfering with or unreasonably burdening the fundamental right to vote.”

Supporters said they had submitted about 670,000 signatures.

In their challenge, lawyers for Defend Your Vote argued that the amendment petition did not specify all of the current constitutional provisions it would modify.

One provision they said was improperly omitted designates the “first Tuesday after the first Monday of November” as Election Day. By mandating an early-voting period, the challengers argued, the amendment would render that provision “inoperative.”

Micheal Davis Jr., the executive director of Promote the Vote, the group supporting the voting amendment, called the complaint “bogus, baseless and meritless.”