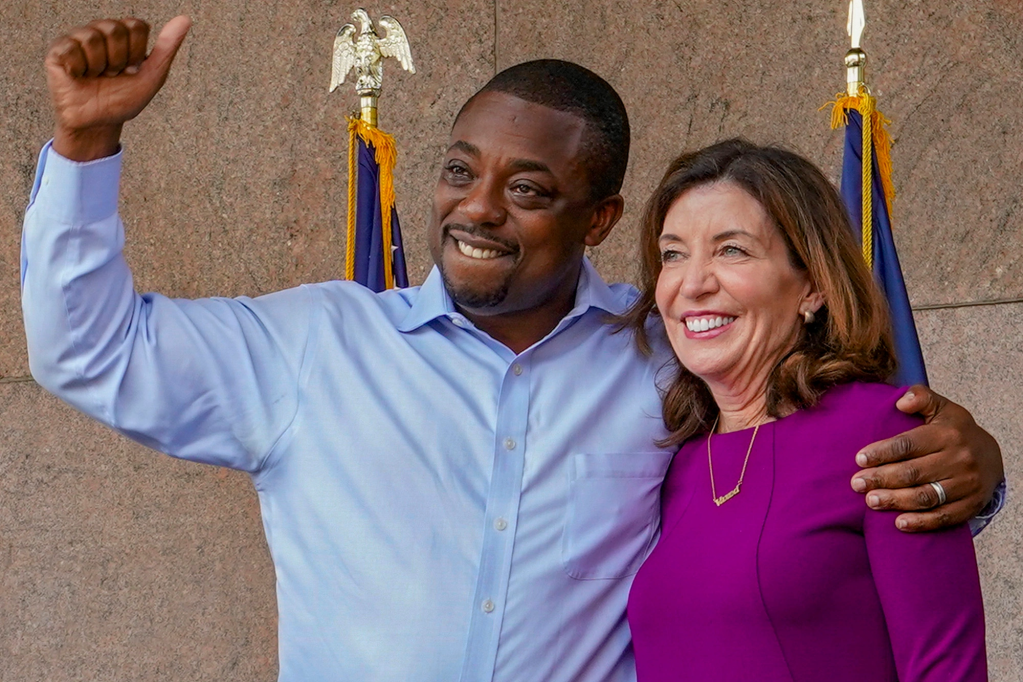 Gov. Kathy Hochul appears to have expended her political capital in Albany.

State Senate Majority Leader Andrea Stewart-Cousins asked a top lieutenant to withhold sponsorship of legislation that would have given Hochul a way to boot her now indicted pick for running mate, ex-Lt. Gov. Brian Benjamin, off the June primary ballot.

The powerful Senate majority leader has resisted the idea of allowing Hochul to rid herself of the ballot albatross despite her ongoing pleas to legislative leaders.

“I don’t know where my conference is on it,” Krueger said about the legislation following a Wednesday meeting of Democratic senators on the proposal. “There’s lots of different views on it.”

Krueger added that she has no immediate plans to submit the bill.

The ongoing cold shoulder from the Legislature comes amid lackluster polling numbers for the governor and sources say she used up her chips with party leaders when she pushed for and got changes to bail reform laws and $600 million in state taxpayer funding for a new stadium for her hometown Buffalo Bills.

“There was a massive misstep on the stadium. It looked like it was handed to them on a golden platter and then we just rolled over and I think that’s going to continue to haunt her for a while,” one Assembly Democrat said.

Interviews with more than a dozen lawmakers suggest Hochul faces steep opposition from members of her own party — especially in the Senate — as she continues pushing legislative leaders to take action on the matter before the state Board of Elections finalizes the primary ballot in early May.

“I really, really have difficulty changing things in the middle of the process, whatever that process is,” Stewart-Cousins said in an interview aired on WCNY Wednesday.

A spokesman for Assembly Speaker Carl Heastie did not respond to a request for comment.

Benjamin resigned from office weeks ago and suspended his campaign for a full term in office following his arrest for alleged involvement in a bribery conspiracy while he was serving as a state senator. The Harlem Democrat has pleaded not guilty on five federal charges.

Getting Benjamin — who became the preferred nominee for lieutenant governor in February — off the ballot at this point is especially difficult because of existing state law and his reported unwillingness to move out of state, another way that Democrats could dump him from their candidate slate.

Benjamin’s removal would leave former City Councilwoman Diana Reyna and progressive activist Ana Maria Archila, who has received endorsements from progressive legislators in recent weeks, as the only Democratic candidates on the June ballot for lieutenant governor.

Some Assembly members, like Richard Gottfried (D-Manhattan), said Wednesday that they support the gubernatorial push to change state election law ahead of the June 28 primary, but others say it is rubbing them the wrong way — especially considering the potential blowback from voters in November.

Not a single Senate Democrat — out of nearly a dozen contacted by the Post — stated their support for helping a governor of their own party remove her indicted running mate from the ballot. A compromise proposal, which has been floated in both chambers in recent days, would take Benjamin off the ballot but bar a replacement candidate.

The resistance to Hochul even extends to some of her biggest allies in the Legislature.

“We’re discussing as a conference,” state Sen. Tim Kennedy (D-Buffalo) said when asked about his position — a line he repeated when asked for his personal opinion on the matter.

Assembly Majority Leader Crystal Peoples-Stokes (D-Buffalo) — the most powerful Albany legislator from Hochul’s hometown — said she needed to “think about it.”

Some potential supporters in the chamber say they are waiting on official legislative language before deciding definitely where they stand.

“I think voters would be shocked to learn that current New York State law requires a candidate to stay on the ballot even in situations like this,” state Sen. Elijah Reichlin-Melnick said in a text.

Hochul told reporters Wednesday at a press conference in Manhattan that she does not believe she had been “needlessly antagonizing anyone” in the budget process or afterwards despite ongoing criticism of her approach to legislators.

She added that she is ultimately more concerned about the opinions of people beyond the Democratic lawmakers who hold her legislative agenda in their hands.

“I want to make sure that the ultimately the winners are the people of New York,” Hochul said,” she said. “There’ll come a day when these legislators … [are] gonna want my support. I’m gonna want their support. And that’s how we usher in a whole new day in New York government.”