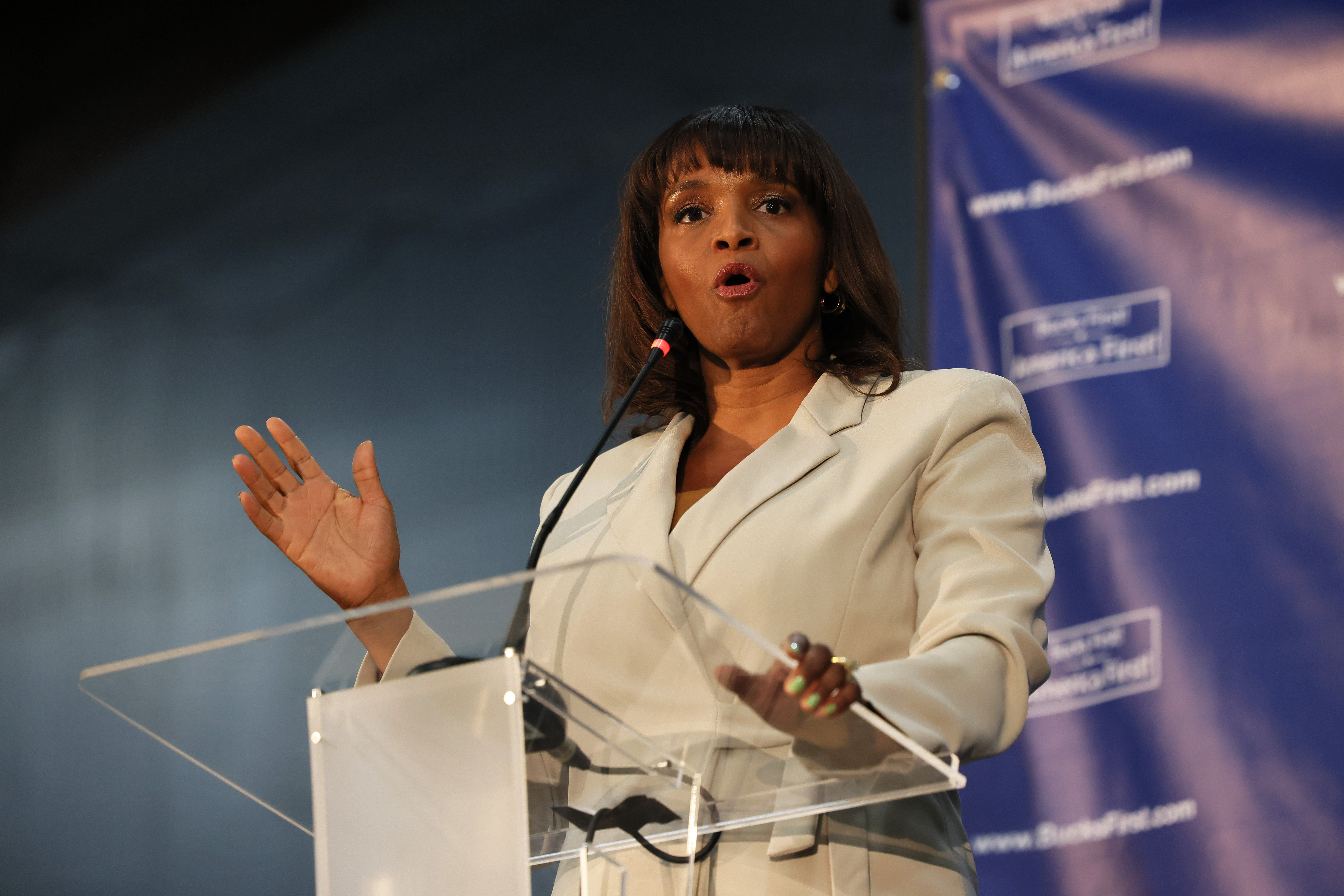 But in the last 48 hours, the Oz and McCormick campaigns and their allies have been suddenly forced to recalibrate as Barnette has surged to the front of the pack. In a sign of how seriously they take her rise, both men have gone on the attack against Barnette on conservative media outlets, while their allies have scrambled to disseminate opposition research and prepare anti-Barnette ads.

Even former President Donald Trump, who has endorsed Oz, decided Thursday that it was time to throw up a roadblock. In a statement, he cast doubt on her electability in the critical battleground state that could determine party control of the Senate: “Kathy Barnette will never be able to win the General Election against the Radical Left Democrats.”

“I think what’s happened is neither Oz nor McCormick have excited anybody,” said John Brabender, a Republican strategist who is a veteran of Pennsylvania campaigns and is not working for a candidate in the Senate primary. “They’ve spent a lot of money and people viewed it as millionaires behaving badly — they were looking for any alternative that they could find.”

Oz and McCormick weren’t the only ones caught off-guard by Barnette’s late surge. Many Republican political consultants at the state and national levels also didn’t see it coming. Though she had been slowly rising in the polls in recent weeks, the release of a Fox News survey Tuesday, showing her in a tight race with Oz and McCormick, confirmed her momentum was undeniable.

As part of the eleventh-hour effort to stop a Barnette nomination, operatives and allies supporting Oz and McCormick have circulated opposition research on Barnette — including highlighting the general lack of vetting she’s received. For months, the conservative commentator flew under the radar as the two leading candidates and outside groups dropped tens of millions of dollars on television ads attacking each other.

“The attacks are pretty vicious and way out of context and pieced together in an arrangement that totally distorts the truth,” said Bob Gillies, Barnette’s campaign manager. “But Kathy’s going to focus on the campaign and her policies and push forward.”

Trump is set to host a tele-rally with Oz Thursday night, a call that will go out to more than 100,000 Republican primary voters in Pennsylvania, according to a person familiar with the plans.

Barnette, who has been described by former Trump aides as “ultra-MAGA,” received a massive boost this week when the conservative Club for Growth super PAC — one of the top outside spending groups in Republican Senate primaries this cycle — endorsed her and revealed it would spend $2 million on TV ads supporting her.

Fox News host Sean Hannity, a top Oz ally, laced into Barnette on his show Wednesday, detailing a litany of critiques. He said “she has never been vetted” and failed to answer reporters’ questions about her background. He also pointed out that she lost a House race in the Philadelphia suburbs in 2020 by a wide margin.

“While Kathy claims to be a MAGA conservative, she has a very troubling history of attacking Donald J. Trump,” Hannity said.

Oz joined Hannity on the program and said Barnette is a “mystery” and “it will be a gift to Chuck Schumer” if she wins the nomination.

“We’re going to make sure people are aware the more you learn about her, the scarier it gets,” said a person involved with Oz’s campaign.

American Leadership Action, a pro-Oz super PAC, released a video calling Barnette “Pennsylvania’s wackiest Senate candidate” and aiming to paint her as both out of touch with Republicans and unhinged: It featured clips of her talking about “white racism” and how “Black Americans feel disenfranchised.”

Texts have also gone out labeling Barnette a “BLM radical” and linking to CrazyKathy.com, which redirects to American Leadership Action’s website.

McCormick, meanwhile, is taking a less aggressive approach in his efforts to cut down Barnette. On his first appearance on Steve Bannon’s podcast “War Room: Pandemic” on Thursday, McCormick questioned Barnette’s electability.

“In Kathy Barnette’s case, she’s already been tested,” McCormick told Bannon. “She was tested 18 months ago in the congressional election, and lost by 20 points, but more than that, she’s being supported by the Club for Growth, which is the establishment.”

Honor Pennsylvania, a pro-McCormick super PAC, is expected to go on TV with an ad criticizing Barnette over “publicly available information” about her, said a person familiar with the group’s plans.

And USA Freedom Fund, a super PAC that attacked Oz in a digital ad last week, pivoted and is blasting Barnette in a new TV ad as a “woke Republican” and accused her of wanting “to build a statue of Barack Obama.” It placed a $723,000 ad buy on Thursday.

Some of McCormick’s allies have also sought to use her endorsement from Club for Growth against her. Formerly led by Sen. Pat Toomey (R-Pa.) — whose retirement sparked the open Senate seat battle — the group has recently found itself at odds with Trump after continuing to run ads in Ohio slamming J.D. Vance as a Never Trumper, even after Trump endorsed Vance.

The Club backed Vance’s rival, Josh Mandel, in that election, and has continued to support Rep. Mo Brooks in Alabama’s GOP Senate primary even after Trump withdrew his endorsement of Brooks in March.

“Conservative, America First voters have to question anyone who would take the endorsement of Pat Toomey’s Club for Growth, who clearly don’t support an America First agenda and have attacked President Trump,” said a prominent Pennsylvania Republican supporting McCormick.

A spokesperson for Trump declined to comment on the Club for Growth’s decision to get involved in the Pennsylvania Senate primary.

“I really think it is a bit of a ‘fuck you’ to Trump, to do this in the last week,” said one Trumpworld adviser. “This is really kind of shocking.”

The adviser noted Oz still has a decent shot of pulling off a victory, but conceded it was clearly possible for Barnette to win, given she has “the most room to grow, with under a week left” after “months of seeing these guys nuke each other.”

While casting doubts about Barnette’s electability in the fall, Trump also appeared to suggest Thursday that she has a shot at winning the primary and has proven her MAGA bona fides.

“She has many things in her past which have not been properly explained or vetted, but if she is able to do so, she will have a wonderful future in the Republican Party — and I will be behind her all the way,” Trump said in the statement.

Despite panic about Barnette among some top Republicans, officials at the National Republican Senatorial Committee, which has declined to get involved in any open-seat primaries this cycle, are publicly keeping their cool. In a political environment favorable to Republicans this year, the group argued there is still no clear evidence Barnette would lose to the Democratic nominee.

“I don’t think anyone can say right now she’s unelectable in the general election, but certainly she’s unvetted, and there are a lot of unknowns,” said a person familiar with the NRSC’s strategy. “We’re not setting our hair on fire.”

Some Republican strategists think it may be too late to sink Barnette with negative commercials, given that she hasn’t faced any attack ads until now.

“When you get momentum this late in a campaign and people probably aren’t going to hear much new about you because there’s not much time, I think it’s hard to stop that momentum,” Brabender said.