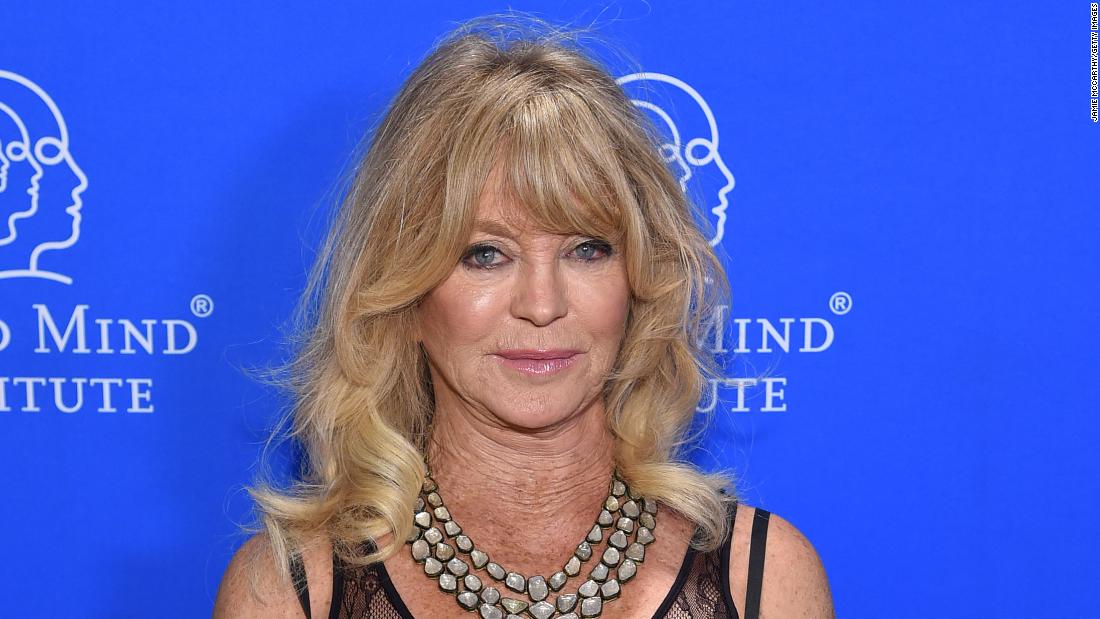 The superhero origin story of becoming the Goldie Hawn of today has roots in a pair of global threats of violence. The first triggered childhood anxiety for Hawn, and the second inspired her to address anxiety as an advocate for kids.

It’s a two-part tale she shares in her book “10 Mindful Minutes” (written with Wendy Holden), and recently onstage at the Life Itself conference, a health and wellness event presented in partnership with CNN.

As an 11-year old, Hawn watched a “duck-and-cover” Cold War atomic bomb preparation film in school. Its frightful effect on her developed into anxiety and panic attacks that lasted through young adulthood. She sought out professional help through a therapist, and began a mindfulness practice with the guidance of the Maharishi Mahesh Yogi, famous for being a onetime spiritual adviser to the Beatles and for popularizing a practice known as Transcendental Meditation.

Then when Hawn watched the aftermath of terrorist attacks on September 11, 2001, she had flashbacks to the atomic bomb film. While the actor shared the nation’s shock and horror, she also became inspired by the events to be more in service to others, particularly kids.

She created The Goldie Hawn Foundation, aimed at addressing anxiety among children through the kind of in-classroom practice she could have benefited from herself. The 9/11 attacks, she knew, would be a trigger of fear for another generation.

“Remembering my own childhood anxiety, I longed to show children everywhere how to rediscover their natural joy, understand the value of their emotions, and learn to feel empathy for others,” Hawn wrote in her book.

The question of how to achieve this goal led to a renewed education in mindfulness and brain science, which was incorporated into The Goldie Hawn Foundation’s social and emotional learning program called MindUp For Life. Through MindUp, children are taught breathing techniques, mindful sensing and how the brain reacts to emotions. Provided with tools for critical thinking and fostering empathy, kids are also shown how to bring themselves back to a neutral point and implement random acts of kindness. A few times a day, these students pause their routine and take “brain breaks.”

“These life skills have been something I’ve been interested in since I was a kid,” Hawn told CNN. Her goal is to give children the agency to change how they react to the world, and therefore become more resilient.

Today, the MindUp curriculum is taught in thousands of schools, primarily in the United States, United Kingdom and Canada, with partnerships in dozens of other countries. The focus has been on classroom instruction for kindergarten through eighth grade, but the foundation has and is developing resources for parents and caregivers, high school students and sports programs.

This is your child’s mind on mindfulness

There is a lot of science on the mental health of meditation and other mindfulness practices. Doing them regularly can lower stress and cholesterol, alleviate pain, increase resiliency, and improve sleep, memory, concentration and even relationships.
There is additional research showing specific benefits of a mindfulness practice for kids. MindUp itself was the subject of a study, cited in Hawn’s book, of 200,000 kids, in which it found those who participated had better reading scores, less playground aggression, increased feeling of optimism and less absenteeism. One study last year found elementary school children who took mindfulness training two times a week for two years slept an average of 74 extra minutes a night. Experts also cite stress reduction and attention building as key benefits.

“When we — or our children — are stressed, anxious, bored, or unhappy, we are much less able to cope with problems and take in new information. Our brains close tight like a fist,” Hawn wrote in her book. “If we are happy, relaxed and curious, on the other hand, our brains open like a flower.”

Mainly though, mindfulness practice has been shown to help kids manage emotion and increase social-emotional virtues such as empathy — key life skills during a time when so many events could trigger anxiety.

In the introduction to Hawn’s book, child psychiatrist Dr. Daniel J. Siegel has another metaphor for the resilience-giving power of a mindfulness practice: an “emotional vaccine.” In this time, even young kids know what a vaccine means.

“Mindfulness to me is like a superpower for children,” said mindfulness educator Travis M. Spencer in an earlier interview with CNN.

“The more they can feel connected to themselves, to others and to their environment, the more they can thrive and feel supported, and feel like they can do whatever they want to do,” said Spencer, the executive director of the Institute of African American Mindfulness.

What do we mean by “mindfulness” and how do we explain it to children in a way that sounds like something they might want to do?

It’s a very basic concept. “Paying attention with kindness and curiosity to yourself, other people and the world around you,” Susan Kaiser Greenland defined it in a 2021 interview with CNN. Greenland is an author and educator with 30 years of training in meditation, including teaching children mindfulness.

Learning to be more mindful can be as simple as counting your own breath, listing details from what you see, hear and smell around you, or describing one’s mood or physical sensation in this moment.

Kaiser Greenland shared five introductory mindfulness techniques for kids in a previous interview that include mindful breathing, movement, noticing, gratitude walks and guided meditation.
There are many beginner mindfulness apps and books as well, some geared specifically for children and their caregivers. Those include Hawn’s “10 Mindful Minutes,” Kaiser Greenland’s “Mindful Parent, Mindful Child: Simple Mindfulness Practices for Busy Parents” and Diana Winston’s “The Little Book of Being: Practices and Guidance for Uncovering Your Natural Awareness.” Winston, director of mindfulness education at the University of California, Los Angeles’ Mindful Awareness Research Center, helped develop a free UCLA Mindful App with guided meditations.

But however far a mindfulness journey takes you, it’s going to be a happier and more resilient place. “Your brain,” Hawn said to CNN, “can be your worst enemy or your greatest friend.”