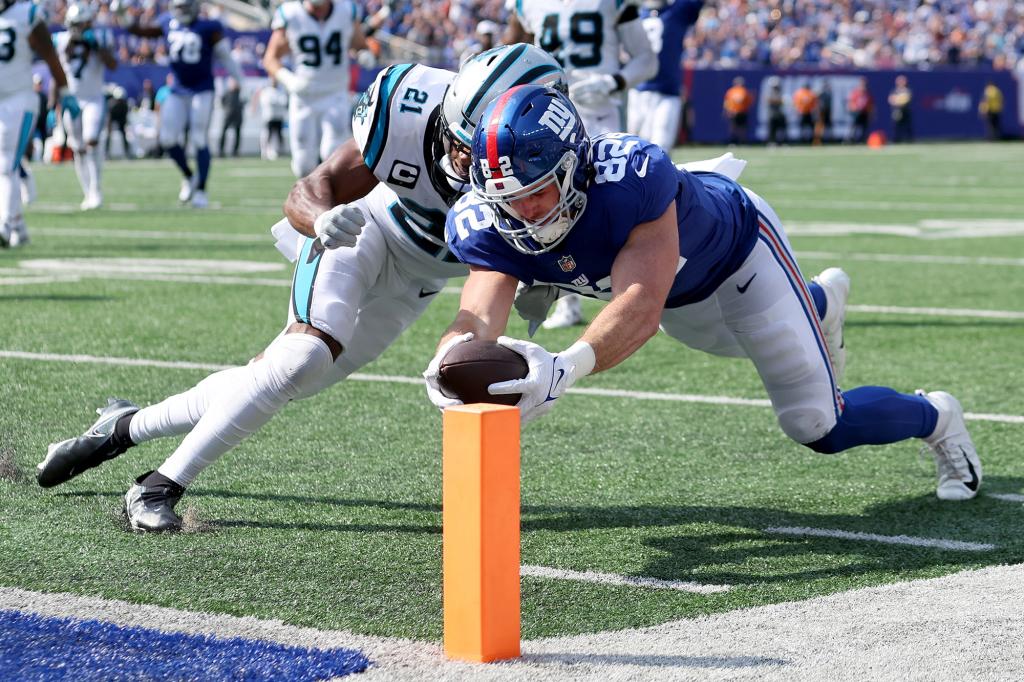 Daniel Bellinger made his NFL debut last week in Nashville but did not have a reception when the Giants beat the Titans. The Giants scored only one touchdown on Sunday in their 19-17 victory over the Panthers at MetLife Stadium and Bellinger got it with a lunge into the end zone.

The Giants were down 13-6 in the third quarter when tight end Tanner Hudson hauled in a 15-yard pass from Daniel Jones to get to the Carolina 16-yard line. Jones found Bellinger on a quick and short pass to the left side, Bellinger turned, saw daylight and angled to the left pylon for a touchdown.

“I turned and didn’t see anybody, and I was like, ‘OK, I have to get into the end zone now,’ ” Bellinger said.

The rookie tight end, a fourth-round pick from San Diego State, gave the ball back to the official. It was retrieved for him and it was in his possession in the locker room after the game.

“I’ll tell you what, I’m keeping it close to me tonight,” Bellinger said. “I’m holding onto it tonight.”

Defensive coordinator Wink Martindale used Xavier McKinney in a hybrid linebacker role, positioned much closer to the line of scrimmage than he ever was the past two seasons. The presence of rookie safety Dane Belton, who missed last week’s game coming off a broken collarbone, allowed Martindale to push the envelope with McKinney.

“I wouldn’t say that it was different, but it was the first time that I had to do that at this level,” McKinney said. “Obviously the first two years, I didn’t get to play in the box. In this game, I got to play in the box. I got the responsibility of Wink putting me on [Christian] McCaffrey. That was my job this game, was to guard him. I thought I did a pretty good job of doing that, taking him out of the game. It was different, playing in that box. It’s a different game. There are some different monsters down there, but I thought I did well, I thought I was able to get the job done.”

The Panthers have now lost nine consecutive games — they are 0-2 this season and lost their last seven games in 2021.

LB Oshane Ximines had a second-quarter sack of Baker Mayfield. It was the first sack for Ximines since his rookie season in 2019. Ximines is starting because Azeez Ojulari and rookie Kayvon Thibodeaux missed the first two games with injuries.

“They’re hurt right now and they’re doing everything they can to get back,’’ Ximines said. “While they’re out, I’m going to do everything I can to help the team win.’’

The Giants were 12-28 at home the past five seasons before this home-opening win. … With rookie WR Wan’Dale Robinson (knee) inactive, Darius Slayton got a jersey for this game.

Panthers QB Baker Mayfield didn’t take advantage of a weakened Giants secondary, looking very average in completing 14 of 29 passes for 145 yards with one touchdown and a recovered fumble.

Julian Love led the Giants with seven tackles (two for loss), including the third-down sack to force a punt on the Panthers’ final possession.

0: Turnovers by the Giants, who turned the Panthers’ two lost fumbles into six points.

“Coming off the field, getting booed, Coach told us that we have to stay focused at times like that and stick together as a team.”

– Giants tight end Daniel Bellinger on the Giants being booed off the field at halftime.