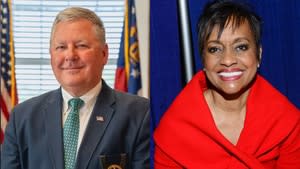 Channel 2′s Cobb County Bureau Chief Michele Newell spoke to Thomas Brown, the former sheriff of DeKalb County, who is listed as a witness to the incident.

Brown said he’s not just a witness, but had to physically intervene.

Brown said that remembering that day brings back many unsettling feelings.

Brown said that Hatchett was his guest at the conference, and that Coody groped Hatchett as he was introducing her to sheriffs at the Renaissance Atlanta Waverly Bar.

Brown said three sheriffs came to the standup table, including Coody and the president of the Georgia Sheriff’s Association. Brown said he turned his head away from Coody and Hatchett as they were talking.

“As I turned to my left to focus back on the two of them, I saw his hand go down on her left breast,” Brown said. “I grabbed his arm threw it off of her chest and basically said, ‘What are you (adjective) think you’re doing?’ and that’s basically where it ended.”

Brown said he was so angry that his first reaction was to do more than take his hand off of her.

Brown said Hatchett told him the incident shocked her.

“After that, she had a rough time of it,” Brown said.

Brown said he immediately removed Hatchett from the room and had a stern conversation with Coody the next day.

Coody has since been charged with sexual battery.

Channel 2 Action News is only identifying Hackett as the victim because she wanted her story told.

“She’s very passionate about telling her story at some point in time, if for no other reason, for the hundreds or ladies out there who may have been victims of some time of sexual assault, but have not said anything because they are afraid to do so,” Brown said.

Newell tried contacting Coody, but he wasn’t available. Channel 2 Action News did receive a statement from the sheriff’s office and Coody after he turned himself in. Coody said he takes the charges seriously and will comply with all legal obligations placed on him.

Coody said that while it would be improper to contact Hatchett, he looked forward to personally expressing his regrets for an offense at the appropriate time.

Brown said he was going public with the story because he wants the judicial system to be respected.

“I felt like I needed to say something, because the accusation is now out. It’s unsealed,” Brown said. “The judge had no problems with it being unsealed, because she’s a lot stronger now.”