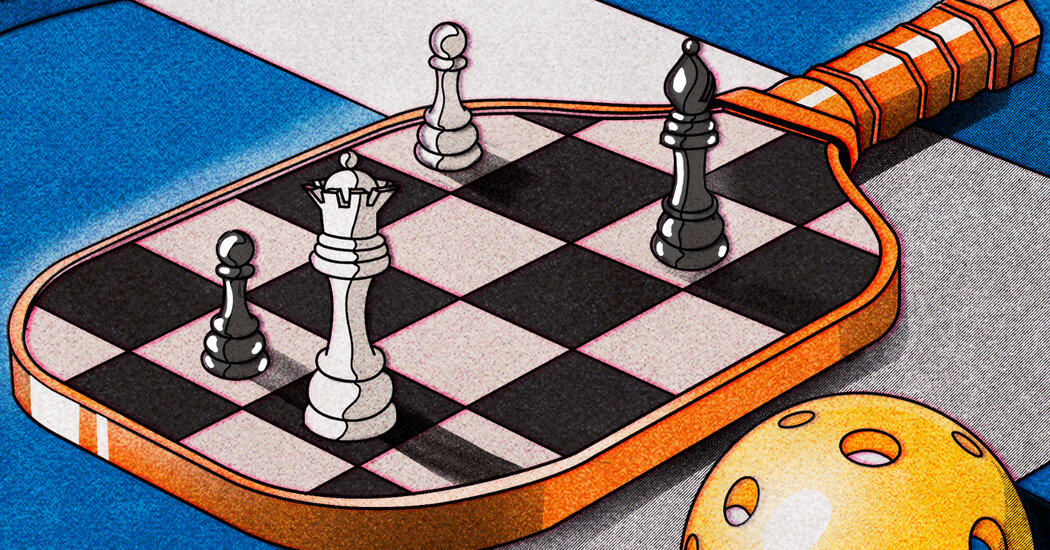 The lesson began with a provocation. “People say pickleball is a mash-up of tennis, badminton and Ping-Pong,” our teacher said. “But it’s really a game of chess.”

Intriguing! I had been thinking about chess before the instruction even began, specifically those oversized garden-party sets with four-foot-tall pawns. The pickleball court feels like a giant Ping-Pong table, and the roughly 10 of us assembled there for a Saturday morning lesson seemed comically out of proportion to it, “Honey, I Shrunk the Players.”

This wasn’t technically my first time playing pickleball, which, as you have no doubt heard, is America’s fastest-growing sport. In high school, we played it in P.E. In fact, up until recently, I thought pickleball was a sport made up by gym teachers specifically to exhaust kids in the gym when it was too rainy for kickball.

At my lesson last weekend, the rules were dispensed with quickly: Serve the ball, keep it in play, don’t overthink it. My cohort was all beginners, so we bonded readily over our lack of skill and cheered each other on when we started getting the hang of things. It took a little time to determine how much force is needed to hit the ball, which is hollow, plastic, lighter than a tennis ball and not nearly as bouncy. But after about ten minutes, my serves start landing in the correct box, my returns going over the net.

The line on pickleball is that it’s easy to learn and accessible to players of a wide range of ages and abilities. I played it as a kid, but it’s also popular among retirees. If you know anyone who “pickles” regularly, chances are they talk about it a lot and seem to be having the kind of clubby fun reserved for people who are into Dylan bootlegs or intermittent fasting.

Having tried pickleball now as an adult, I see why people are wild about it. The rules are simple, the mechanics of the game challenging but not intimidating. The court is small enough that all four people playing doubles can chat and trash talk at their leisure.

We didn’t get into strategy at my first lesson — we were too focused on just hitting the ball — but when I texted the teacher a few days later, he expanded on the chess metaphor: “Like chess, you need patience and the ability to anticipate your opponent’s next three moves.” I’ve heard tell of the important “third shot drop,” which follows the serve and its return and is meant to land in your opponent’s “non-volley zone,” also known, cozily, as “the kitchen.”

I’m excited to learn what exactly these terms mean in practice once I get back on the court. In my zeal, I did end up experiencing another, less delightful aspect of the pickleball trend: the pickleball sprained ankle. It hasn’t dimmed my enthusiasm, though I do advise fellow would-be picklers to limber up before hitting the court and be sure to wear good, supportive shoes.

📚 “Fairy Tale” (Tuesday): It’s not a surprise that I am recommending the new Stephen King book, given that I’ve read each of his more than 70 novels and short story collections. Some more than once! (Take a look at my guide to some of his essential works.) I can already see myself rereading this one, an early copy of which I devoured during my Covid isolation. It’s about a teenage boy, his dog and a magical fallen world they discover. Our reviewer called it “a page-turner driven by memorably strange encounters and well-rendered, often thrilling action.”

📺 “The Good Fight” (Thursday): The sixth season of this often uncategorizable legal drama, which streams on Paramount+, is unfortunately also its last. The great Christine Baranski continues to lead a stellar cast, and — you know what, if you haven’t watched this at all, I think you should read some reviews of Season 1 and just start from the beginning. It’s so funny and odd. (Our chief TV critic James Poniewozik once wrote about the show’s clever opening credits sequence.)

RECIPE OF THE WEEK

There’s an art to grilling vegetables that goes way beyond cutting them into chunks and tossing them over coals. In David Tanis’s recipe for grilled summer vegetables with tahini dressing, the tomatoes, zucchini, eggplant and onions get different grilling methods, guaranteeing they are tender through their middles and lightly charred at their edges, not burned or underdone. If you’re planning to fire up the grill this weekend, this recipe would make a fine side dish, or centerpiece, at any Labor Day festivities. The garlicky tahini dressing — made extra creamy with yogurt — adds richness and tang to the mellow veggies. But you can replace it with any other dressing or topping that you like. Or serve the vegetables plain, letting their jewel-like colors shine.

A selection of New York Times recipes is available to all readers. Please consider a Cooking subscription for full access.

Notre Dame vs. Ohio State, college football: At the end of last season, while Notre Dame waited to see whether it would make the playoff, head coach Brian Kelly accepted a new job at L.S.U. The news reportedly stunned the team, whom he had not told beforehand. To succeed Kelly, Notre Dame promoted defensive coordinator Marcus Freeman, then 35, who had no experience as a head coach but was beloved by players and recruits.

This will be Freeman’s first regular-season game in the top job, and it will not be an easy one. Ohio State led the nation in total offense last year, and its star quarterback, running back and wide receiver are returning this season. Despite their close rankings — Notre Dame is No. 5, Ohio State is No. 2 — oddsmakers have picked Ohio State as 17-point favorites. Tonight at 7:30 p.m. on ABC.

The pangram from yesterday’s Spelling Bee was halogen. Here is today’s puzzle.

Take the news quiz to see how well you followed this week’s headlines.

Here’s today’s Wordle. After, use our bot to get better.

Thanks for spending part of your weekend with The Times. — Melissa