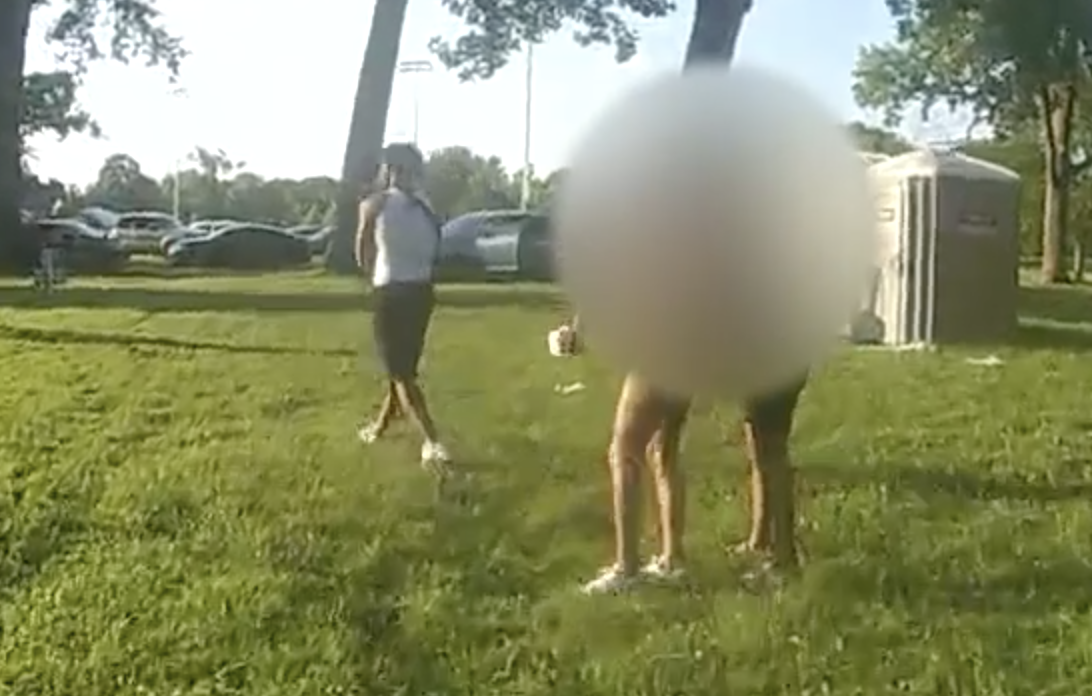 The Louisville Metro Police Department has released all footage from the July 10 shootout between five officers and a man they were attempting to arrest following the Dirt Bowl basketball tournament in Shawnee Park.

The footage, totaling more than 145 minutes long, shows the moments leading up to the shooting as the officers approach 30-year-old Herbert Lee, who was standing with two people in the park. As the officers near him, he can be seen slowly beginning to back up before taking off into a field in a full sprint.

The pursuit goes hundreds of yards into the field before Lee’s sprint turns into a slow walk after multiple bullets struck him. One of the officers involved, Nicholas Hollkamp, fell two minutes into the pursuit, and his bodycam turned off. It resumed after the shooting and a crowd began to form around the officers and Lee, who was lying on the ground bleeding.

Hollkamp is the son of The Courier Journal’s Breaking News Editor Nick Hollkamp.

Another officer’s video, Joshua Pickering’s, shows Hollkamp removing a gun from where Lee was lying and unloading it.

In Pickering’s video he can be heard telling an officer that he was hit in his chest and later, having another officer inspect his body to ensure the bulletproof vest had protected him from being wounded. When EMT workers arrived, they examined Pickering and noticed his cellphone, which was attached to his vest, had also been shattered.

While two officers provided medical care to Lee, the others began working to form a perimeter around them as more people ran over to the scene, questioning why the officers shot Lee.

Another officer who fired his weapon, Richard Williams, immediately left the shooting scene and retrieved his LMPD pickup from the other side of the park. Several times on his trip to the truck and once he got back, he can be heard explaining to people they shot at Lee because he was shooting at them.

It took about 15 minutes from the time that Lee was struck until he was taken to the University of Louisville Hospital in an ambulance. It appears he suffered wounds to both arms, a leg and his stomach.

Along with Holkamp, Pickering and Williams, Officers Daniel Burnett and Joel Voelker shot at Lee, according to a release from LMPD.

Williams was the only officer named as having been involved in the shooting who had a reprimand on his record, according to the department’s release. The reprimand was for missing a court appearance in September 2012.

All of the officers were placed on administrative duty.

Lee spent four days in the hospital before he was booked into Metro Corrections. Officers were attempting to arrest him that day in the park for having more than 10 outstanding warrants.

The following day he was arraigned on a plethora of charges, appearing before the court with bandages on his arms and claiming the jail staff had failed to provide him with any medical attention since he arrived. He also said he was being denied phone privileges.

“I’m open all over,” Lee said, gesturing to bullet wounds on his body. “My body is in pain.”

The officers who pursued Lee and another officer who was already in the park immediately began giving Lee medical attention by putting tourniquets around his arms and legs. Lee laid on the ground, largely remaining calm, while requesting water.

The latest on Shawnee Park shooting:Suspect in LMPD shooting appears in court

He entered a plea of not guilty on all of the charges. His bond was set at $1 million cash only, and his next court appearance is July 25.

Shortly after the release of the bodycam footage, a U.S. Department of Justice release announced Lee is also facing a federal charge in connection with the Shawnee Park incident. He was indicted by a federal grand jury on the charge of being a felon in possession of a firearm and faces a 10-year sentence in federal prison.

The firearm Lee has been accused of using during Sunday’s shooting was recovered at the scene, according to police. According to the body cam footage released by LMPD, the gun was stolen.

When asked why the department was deviating away from its previous protocol, LMPD spokesperson Angela Ingram wrote, “Our goal is to release the footage as promptly as possible, but not at the expense of conducting a comprehensive investigation. It is imperative that we secure witness statements as they saw events, not as events have been interpreted by others.”

Some of the footage was blurred in order to keep bystanders’ identities private.