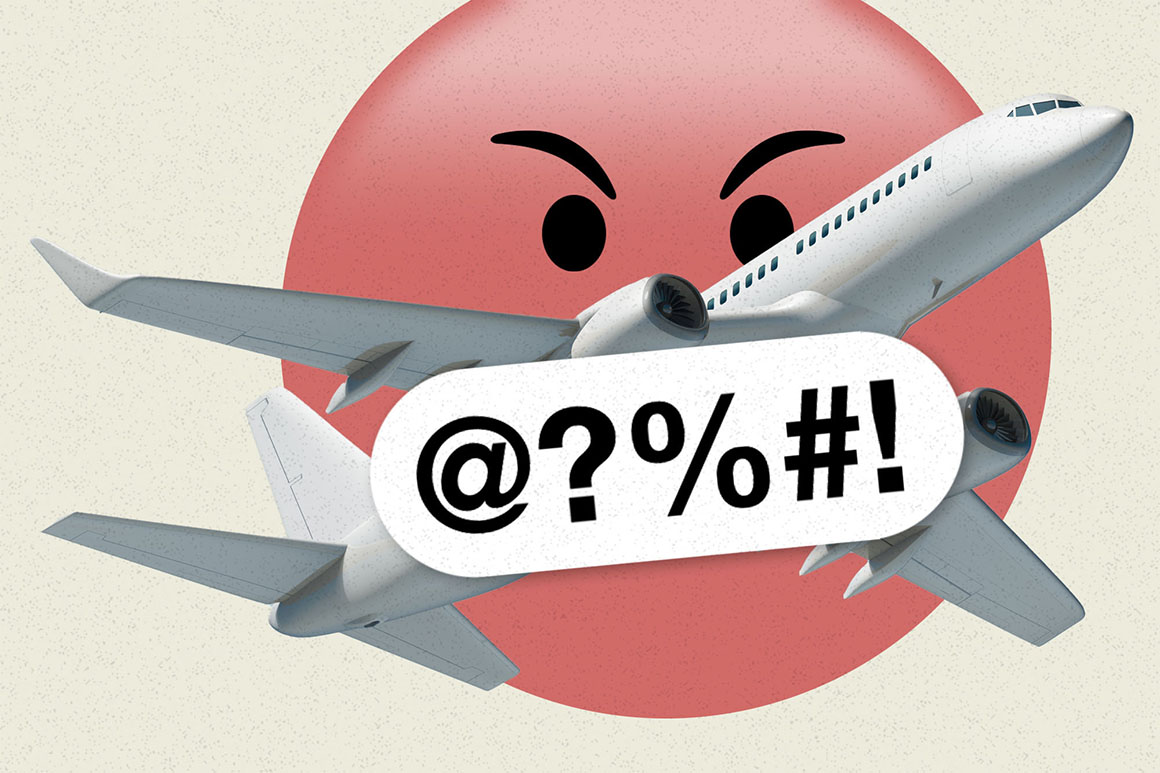 “Like what’s going on?” asked Charles Roderick, from Florida, who was also waiting on a flight to Boston.

This was no epic travel meltdown — just a normal late-August Friday for an airport that’s consistently ranked as one of the most-delayed in the country, in a year when travelers across the U.S. are complaining about airlines’ performance in the post-lockdown era. As the number of flights recovers from the depths of the pandemic, the airlines’ hot mess in the skies is also drawing the ire of lawmakers, and becoming a growing problem for Transportation Secretary Pete Buttigieg to figure out.

The former (and possibly future) presidential hopeful has been vocal on the subject, blitzing the airwaves and social media this summer with attempts to reassure Americans how hard their Department of Transportation is working. Buttigieg, who himself has been victim to canceled flights, also tweeted out advice on how people can apply for refunds.

His department has also taken steps to try to force airlines to make passengers whole for canceled flights — though it has done little to remedy flight disruptions before they start. DOT has broad consumer protection authority, which in the past it has used to force major changes such as banning smoking and cellphone use.

The department says it has used its bully pulpit to prod airlines into action — and just days before Labor Day, several major airlines announced stepped-up consumer measures, such as more generous hotel and meal vouchers when flights get canceled or significantly delayed and more flexibility to reschedule flights. DOT is also pursuing a rule that would force airlines to reimburse passengers with cash when their flight is canceled, but that could take months to finalize, if not longer.

But none of that is likely to remedy the endemic problems that Congress is complaining about, such as congestion and hollowed-out staffing in an airline industry that received more than $50 billion in pandemic aid.

In June, the most recent month for which data exists, customer complaints about airlines were 270 percent higher than pre-pandemic levels, according to the federal Bureau of Transportation Statistics, a trend that has persisted for much of this year.

Others have just given up.

At Newark, the time ticked up as Pete Meulenberg waited for crews to move his plane bound for Virginia from the terminal next door. Asked if he planned to complain, the Kentucky native responded: “Why? It doesn’t get you anywhere.”

Though Newark consistently ranks low by most of the Transportation Department’s metrics, it’s far from the only poor performer. In fact, as flights climb toward pre-pandemic levels, many major airports have been strained amid a crush of passengers, chronic airline overbooking and a workforce that’s still too thin.

Airlines have defended their performance, saying they’ve beefed up compensation for passengers whose trips are disrupted and even cut down on the number of overscheduled flights that they can’t realistically operate.

DOT defended its own performance, which a senior administration official credited this week with bringing short-term gains for travelers. The official touted an online dashboard that went live Thursday morning, which gives consumers a cheat sheet of their rights as passengers, along with a way to compare airlines’ customer service commitments in the event a flight is canceled. Those include whether the company will pay for transportation to a hotel.

“We were able to move within two weeks to improve the [airlines’] transparency,” said the official, who also pointed to recent moves by airlines to institute more robust hotel and meal vouchers and rebook passengers free of charge. The official, who spoke on condition of anonymity to speak candidly about the department’s efforts, said Buttigieg had also gotten “the airlines to operate more realistic, reliable schedules” instead of letting people book flights they know they won’t be able to staff.

“The secretary is always very solutions oriented,” the official said. “He always wants to bring people in to talk about how to improve things without bringing down the hammer to begin with, and you’re continuing to see that.”

At the same time, Buttigieg sent a letter to airline CEOs warning that his department may take additional steps to strengthen the rights of travelers beset by cancellations and other problems.

Buttigieg has also done multiple television appearances to talk about passengers’ frustrations with the airlines and vowing to take action, if cajoling doesn’t work.

“When the right thing to do is to roll up our sleeves and bring the airlines to the table and work with them, I prefer to do that, but we’re also going to use our enforcement powers to make sure passengers have a better experience,” the secretary said in August on MSNBC. He added: “But remember at the end of the day, these are private businesses.”

In a CNN appearance, he said: “I think a lot of passengers don’t understand how more than $50 billion goes to keeping these businesses in business, and then when demand comes back … they’re not prepared to meet or service that demand.”

On the day DOT debuted its dashboard, the U.S. aviation system saw more than 2,000 delays within, into or out of the United States, according to the flight tracker website FlightAware. The major bottlenecks were Dallas Fort Worth International Airport and Dallas Love Field Airport, with other residual delays at Chicago O’Hare.

Some in Congress say DOT is not doing nearly enough to make aviation operate more smoothly. They have begun to call for empowering another agency to safeguard passenger rights.

Reps. Jan Schakowsky (D-Ill.) and David Cicilline (D-R.I.) introduced a bill last month, H.R. 8698 (117), that would allow the Federal Trade Commission, not just DOT, to police the airline industry. This would eliminate the exemption from the FTC’s consumer protection oversight that the airline industry has long enjoyed.

“This summer, the Department of Transportation has taken some urgent actions to make consumers whole, but they are fighting years of deregulation,” Schakowsky said in a statement Wednesday. “It is high time the FAA got some backup from the FTC — another regulator experienced in both consumer protection and competition.”

“This industry has become inexcusably unaccountable to consumers, and it’s clear that Congress and the administration need to step in,” added Sen. Ed Markey (D-Mass.), who in July introduced a bill, S. 4665 (117), intended to help passengers get cash refunds instead of airline vouchers for canceled flights.

“I’ve also repeatedly called on the Department of Transportation to ratchet up their enforcement efforts to tell airlines that business as usual won’t fly,” Markey told POLITICO in a statement.

‘More of the same’

So far, DOT has mostly pushed airlines to do better. It has also proposed a rule that, like Markey’s bill, would require cash refunds for cancellations.

That offered little relief for Roderick, one of the passengers delayed at Newark. He called for more transparency from the airlines about the causes of delays, saying United had listed his flight to Boston as being on time when he had gotten off his connecting flight earlier that day.

“Did they know this was happening way ahead of time?” he asked. (United said the plane Roderick was waiting for, which had originated out of Tampa, Fla., had a maintenance issue that pushed its departure later by an hour and a half).

Some airlines have responded to the increasing pressure on their business practices, including proactively canceling overscheduled flights, building in more buffer room to better handle hiccups, making it easier for passengers to change their plans and committing to more generous meal or hotel vouchers when flights go awry.

Robert Mann, an airline industry analyst, said the federal government can do little about the problem. He accused the airlines of causing much of the mess by setting unrealistically tight flight schedules that they don’t have the staff to meet.

“I see the fall being more of the same … delays and cancellations,” he said Tuesday.

Short staffing, unrealistic crew scheduling and especially weather are often to blame for the cascading problems that travelers experience. Industrywide labor shortages have left little personnel slack to fill in gaps when delays crop up, and airlines don’t have enough on-call employees who can step in and ease some of the pressure.

Airlines have had to adjust their staffing “for this new normal where there’s a higher level of absenteeism as a result of Covid,” said Sharon Pinkerton, senior vice president of legislative and regulatory policy for Airlines for America, the trade group that represents major carriers.

“It’s a reality that every sector of the economy is experiencing,” she told POLITICO during an interview earlier this summer.

Carriers have juiced hiring, however. According to the latest June transportation employment data, U.S. passenger carriers hired 767,263 workers in June, a jump of 6,775 from May and 23,893 more than in June 2019. But in many cases, those new hires are still being brought up to speed.

“Yes, people have been trained, but they’re still less experienced than our workforce pre-pandemic,” Pinkerton said.

So far, tweaking their schedules to try to avoid last-minute disruptions has been the way airlines have attempted to rein in the turmoil.

For example, A4A-member airlines began adjusting schedules in the spring to cut down flights by roughly 15 percent compared with 2019 levels. Schedules for September and October are down by the same percentage, spokeswoman Hannah Walden said.

The problems on display at Newark are particularly acute, in part due to already packed schedules there and the perennially congested New York airspace, where local delays are responsible for forcing about a third of all delays nationwide. For the first half of 2022, just over 64 percent of flights departing from Newark left on time, giving it the third-worst ranking in a DOT list of major U.S. airports.

United Airlines has complained bitterly about the situation at Newark, one of a handful of congested U.S. airports where DOT imposes soft caps on the number of flights that can operate per hour. Earlier this year, CEO Scott Kirby accused JetBlue and Spirit Airlines of flouting those voluntary limits — and blasted the Biden administration for letting them get away with it.

Three airports in the country face mandatory FAA limits on the number of flights daily, but the agency would need to go through rulemaking to add Newark to that category. United petitioned the agency to do just that earlier this year.

Last spring, both JetBlue and Spirit called Kirby’s assertion misleading and said United hogs the majority of flights at the airport.

“United cancels and delays far more flights at Newark every day, on average, than Spirit or any other carrier,” Spirit CEO Ted Christie said in a letter to Buttigieg in May. “United has long been recognized as the root cause of the airport’s congestion.”

In June, the FAA granted United a special waiver for the airline to voluntarily reduce its operation by about 12 percent at Newark to help ease congestion there.

Back at Newark on that normal-terrible day, delays took their toll. By Friday evening, there had been 71 cancellations and 85 delays departing Newark, mostly from regional carriers.

A group of military veterans traveling to Milwaukee for the American Legion’s annual national convention already knew they were going to be late. The plane they were supposed to board was late by an hour and a half, itself the victim of a delay forced by an earlier equipment malfunction. They were further delayed when the FAA shut down takeoffs and landings at the airport in anticipation of a squall, which added another hour to their delays.

Delays are just the norm, the group of five veterans agreed — but even crossing their fingers for a swift resolution isn’t action. Because “hope is not a method,” said David Corbin, a veteran from New Jersey.

Tanya Snyder contributed to this report.