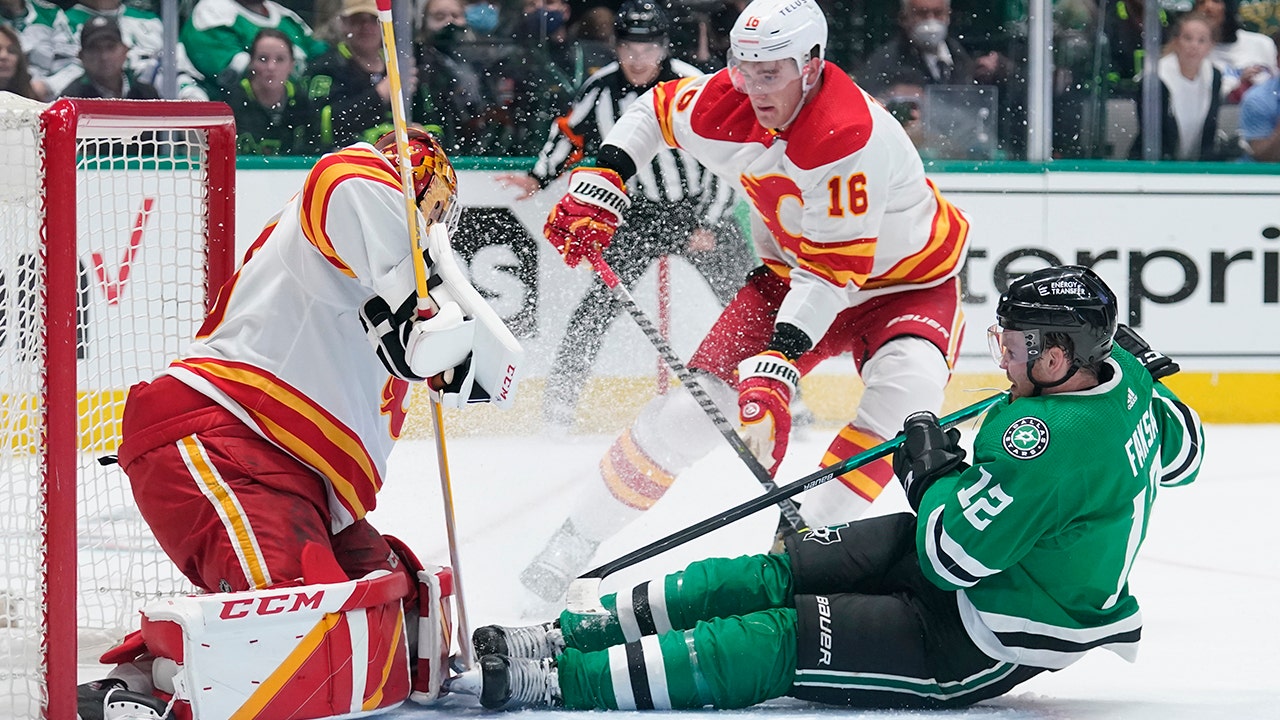 Rasmus Andersson, Johnny Gaudreau and the Calgary Flames felt much more like themselves, and got even in their first-round playoff series with an onslaught of shots.

It helped that they also got to play a lot of 5-on-5 hockey, though Andersson did score Calgary’s first power-play goal since early in the playoff opener, as the Flames beat the Dallas Stars 4-1 in Game 4 on Monday night.

“We had a lot of long shifts in their zone and overall a good game, a good 60 minutes,” said Andersson, who had only two of Calgary’s 54 shots. “We didn’t take too many penalties tonight too, so we get to play 5 on 5, and that’s that’s what we were, a really good team.”

Gaudreau converted a penalty shot with 12:13 left in the game to make it 2-0 Calgary, and later assisted on Elias Lindholm’s third goal of the series as the Pacific Division champions regained home-ice advantage over the wild-card Stars. Mikael Backlund added an empty-netter in the final minute.

It was the first goal of the series for Gaudreau, who in Game 3 was rejected by Jake Oettinger on a late breakaway that would have tied that game.

The Flames forward, a 100-point scorer, was on another breakaway Monday night when John Klingberg was penalized for hooking. Gaudreau made a nifty move on the penalty shot to push the puck through the legs of Jake Oettinger, the 23-year-old goalie who had 50 saves.

“I feel like since Game 1 I’ve been playing well, playing hard against this team,” Gaudreau said. “Last game had a breakaway …. tonight a little different story, found the net. That’s the way hockey is”

Game 5 is Wednesday night in Calgary, where the teams traded shutouts in the first two games while combining for only three total goals — one of those an empty-netter at the end of the Stars’ 2-0 win in Game 2. The series returns to Dallas on Friday night for the sixth game in the best-of-seven series.

“We were off a little bit, and when we’re off a little bit against a top-tier team like that, a big favorite in this league … they’re going to make you pay, and they made us pay tonight,” said Tyler Seguin, who had a late power-play goal for the Stars.

That was the only shot to get past Jacob Markstrom, who had 34 saves.

The Flames were just more than a minute into a 5-on-3 opportunity midway through the second period when Andersson traded passes with Matthew Tkachuk before his shot from the top of the slot made it 1-0.

“It was a solid game for us,” Calgary coach Daryl Sutter said. “The strength of our team is 5 on 5. Our special teams function from what we do 5 on 5.”

Calgary had failed to convert on 13 consecutive power-play attempts before that, including two earlier in the game, since scoring five seconds into their first power play of the series. That was five minutes into Game 1, and the only goal in that 1-0 win.

Before Calgary had a two-man advantage, that power play opened on a split save by Oettinger, who had his right leg fully extended against the post when he pushed away a shot by Andersson.

The Stars have also struggled on the power play, going 0 for 4 with a man advantage in Game 4 before Seguin scored with 4:57 left to get the Stars within 3-1.

Both teams are 2 for 17 on power plays in the series.

“As badly as we played, there was times that we had a chance to give us some momentum, and we didn’t, we didn’t capitalize,” Stars coach Rick Bowness said.

Oettinger has faced plenty of shots in his first four NHL playoff starts. He had 25 saves in the opener, 29 in his shutout win and then 39 more in Game 3.

Midway through the first period Monday, after being peppered with a sequence of shots and unable to secure a loose puck, Oettinger made a impressive save when he reached back while falling down to snag the puck with his glove to deny Tyler Toffoli.

That was only a couple of minutes after Stars defenseman Miro Heiskanen hit the crossbar with a shot.

“Thought we started well, thought our first period was good,” Andersson said. “We stuck with it. We got a big power play good there, and then obviously got the second one and the third one. So overall, it was a good game and you know, it all started with a good start in the first.”