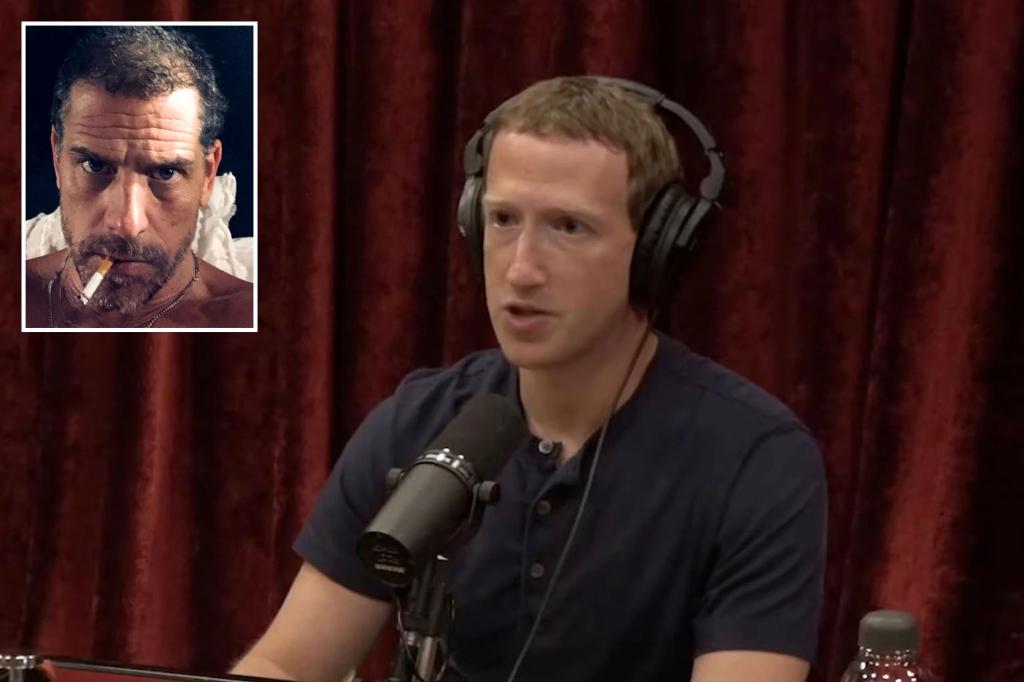 In his eagerness to ingratiate himself with mega-podcaster Joe Rogan, Facebook boss Mark Zuckerberg inadvertently revealed that the FBI had been more explicit than previously known in its private warning about Russian disinformation shortly before The Post published the Hunter Biden laptop story, which the social media company suppressed before the 2020 election.

While Facebook won’t say exactly what the FBI told them, it has told The Post that Hunter Biden was not mentioned. But it refuses to rule out whether Joe Biden or Ukraine were raised in the FBI’s defensive briefing to Facebook weeks before the Oct. 14, 2020, publication of our story implicating the then-Democratic presidential candidate in his son’s lucrative Ukrainian influence-peddling schemes.

“Basically, the background here is the FBI basically came to us, some folks on our team, and was like, ‘Hey, just so you know you should be on high alert,’ ” said Zuckerberg. “ ‘We thought there was a lot of Russian propaganda in the 2016 election, we have it on notice that basically there’s about to be some kind of dump that’s similar to that so just be vigilant.’ ”

When Rogan asked if the FBI had told Facebook to be on guard specifically for our story about Hunter Biden’s laptop, Zuckerberg claimed, rather unconvincingly that he did “not remember . . . specifically” but “it basically fit the pattern.”

In response to questions from The Post, last week Facebook refused to give the date of the FBI private briefing or details of the “pattern” the FBI told them to look out for.

Since our story had nothing to do with Russian disinformation, what made Facebook think it was the “dump” the FBI warned them about? We asked Facebook: “Was there mention made in the FBI briefing of Joe Biden, Hunter Biden, Ukraine or a laptop?”

Whatever was said, the briefing must have been specific enough for Facebook to recognize immediately that our story was exactly what the FBI was warning about and move at record speed to throttle it. At 11:10 a.m. the morning the story went live, Democratic operative Andy Stone, Facebook’s communications manager, issued a statement on Twitter announcing “we are reducing its distribution on our platform” while the story is “fact checked by Facebook’s third-party fact checking partners.”

All morning the bombshell story had been the subject of frenetic commentary from journalists on twitter. But Stone’s announcement killed it stone dead. Twitter followed Facebook’s lead and locked The Post’s account for two weeks.

Mission accomplished. Polls show that the outcome of the election may have been different if the story had not been censored.

The FBI’s involvement in the censorship amounted to election interference, and as we have learned since from whistleblowers, the interference by a cabal of FBI agents to suppress derogatory information about the Biden family extended well beyond The Post’s story.

So, the question is, how did the FBI know about our story weeks before it was published, maybe even before we were told about the laptop by Rudy Giuliani’s lawyer Bob Costello?

Were they spying on John Paul Mac Isaac, the owner of the Delaware Mac repair shop where Hunter had abandoned his laptop in April 2019? Mac Isaac believed he was under surveillance after he first contacted the FBI on October 9, 2019, via his father, to tell them he had the laptop and was concerned about evidence of crimes he believed it contained. The FBI’s response was oddly hostile.

What followed was a curious visit to his Delaware home by FBI agents Mike DeMeo and Joshua Wilson of the FBI’s Baltimore office a month later, and again to his store on December 9, this time with a subpoena for Hunter’s water-damaged laptop and a hard drive clone of its contents which Mac Isaac had made.

The case ID on the receipt the FBI gave him was linked to a money-laundering case out of the Baltimore field office. What we didn’t know until after the election was that the US attorney in Delaware, David Weiss, had been investigating Hunter since 2018 over alleged tax evasion, money laundering and violations of the Foreign Agent Registration Act (FARA), and the Baltimore FBI office supposedly was conducting the associated investigation.

We don’t know whether Mac Isaac was under FBI surveillance. But we don’t have to speculate about Rudy Giuliani.

We know the FBI spied on the former mayor’s cloud for two years from May, 2019, a month after he began working as then president Donald Trump’s personal attorney. A year after raiding Giuliani’s Upper East Side apartment last April, ostensibly over FARA violations, the FBI returned all his devices, without charging him, and told the New York Times he was no longer under investigation.

So the FBI had access to all Giuliani’s emails and iMessages for two years. Were they spying on Giuliani in order to spy on Trump?

Unfortunately for them, Trump rarely writes emails or texts so they came up empty there. But it is possible that they saw the email to Giuliani from his lawyer Bob Costello at 4.28 p.m. on Aug. 27, 2020, telling him of Mac Isaac’s “amazing discovery.”

“I am arranging to get a complete copy of the hard drive as it contains lots of materials beyond the Ukraine stuff according to the owner . . . The five emails he sent show that Hunter was directly involved in orchestrating his father Joe Biden’s intervention to stop the Ukrainian investigation of Burisma,” Costello wrote. “I believe that we are on the verge of a game changing production of indisputable evidence of the corruption we have long suspected involving the Biden’s and Ukraine — but there is more.”

Costello then forwarded Mac Isaac’s original email addressed to Giuliani, which described how Hunter came into his store disheveled and reeking of alcohol, and attaching a copy of the work order with Hunter’s signature, the FBI receipt and subpoena.

The FBI had access to it all. They had had the laptop for nine months and they knew Mac Isaac was legitimate.

We know they looked at the laptop because Mac Isaac received a series of calls from an agent the day after they seized it, asking how to plug it in.

As we know now from whistleblowers who came forward to Sen. Chuck Grassley, the FBI obstructed its own investigation of the laptop.

Timothy Thibault, an FBI assistant special agent in charge at the Washington field office, has been on leave since Grassley started raising concerns about his suppression of negative information about Hunter before the 2020 election.

The whistleblowers also told Grassley that the FBI had “developed information about Hunter Biden’s criminal financial and related activity . . . verified and verifiable derogatory information” but that was “falsely labeled as disinformation” by FBI supervisory intelligence analyst Brian Auten in August 2020.

Auten has been identified as the analyst who failed to alert his colleagues in 2016 to the “inconsistencies” in the phony Steele dossier, cooked up by the Clinton campaign to claim Trump was a Russian agent.

The same playbook was being applied to the Hunter Biden information.